Judah ( Hebrew יְהוּדָה Yehuda ) is the name of one of the Twelve Tribes of Israel in the Hebrew Bible . The namesake is the fourth son of the progenitor Jacob and his first wife Lea . From his tribal area went around 933 BC. The kingdom of Judah , at the latest 520 BC. The Persian province of Yehud and around 100 BC. The Roman province of Judea emerged. The terms Judeans and Jews are derived from Judah .

The descendants of Judah and later the inhabitants of the kingdom of the same name are called Jehudi . This is where the name Jew came from.

Judah is also called the son of Netanyah in the Bible and a messenger of the princes of the southern kingdom of Judah and king Jehoiakims Jer 36,14  EU 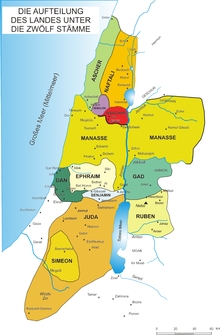 The settlement area of ​​Judas lay in the south of historical Palestine west of the Dead Sea south of a crossbar of Canaanite city-states, which separated it from the rest of Israel and thus favored its special development. In addition to Jericho, it also included the future capital Jerusalem and Bethlehem , David's hometown . His cultic center, however, was initially Hebron , in the vicinity of which Abraham found his burial place: the Mamre grove .

The Abrahamic tales were probably handed down by the tribe of Judah. It is said to have been Judah who had the profitable idea of selling his second youngest brother Joseph to Egypt after the eldest brother Reuben objected to the killing of the father's favorite son, who was hated by the eleven brothers (Gen. 37, 26f). It is also Judah who stands up for the youngest brother Benjamin when he is accused of theft.

Judah married a Canaanite woman who bore three sons: Er , Onan and Shela . His daughter-in-law Tamar disguised herself as a prostitute and bore him two other sons, Perez and Serach (Gen 38).

This article or section needs to be revised. Further details should be given on the ( 1 Sam 27.10  EU ) documenting this merger, otherwise not specified. Please help to improve it , and then remove this flag.

In Jos 15.1 to 12  EU the boundaries of the tribal region are described: they refer regions like the Philistines in the western coastal plain and areas further south neighboring tribes living with one. With these Calebitern , Otnielitern , Kenitern , Jerachmeelitern and Simeonitern the tribe of Judah later united to a great Judaic union of tribes ( 1 Sam 27,10  EU ). This resulted in some special traditions about the conquest of these tribes ( Ri 1,1ff  EU ; Jos 15,13ff  EU ).

The second all-Israelite King David was able to build on this development. After his foreign policy successes, he first became king over the "House of Judah" ( 2 Sam 2,4  EU ). After the other northern tribes also elevated him to their king, he had the Ark of the Covenant , the shrine of the Twelve Tribes, transferred to Jerusalem and the building of the temple began, which David's son Solomon completed. After his death, the young kingdom split into two parts: Judah , the southern kingdom, was now an almost uninterrupted dynasty under David's descendants, while Israel , the northern kingdom, encompassed the territories of the other tribes and formed more frequently changing short-lived dynasties. Both kingdoms were hostile to each other for a long time and only approached again under the Davidid Josaphat .

Since around 750 BC Judah came under the rule of Assyria and lost around 597 BC. BC through Babylonia its statehood. It was split in two; only the Persians elevated a remnant of total Juda to a province with its own governor. During the Roman occupation it became the provinces of Idumea in the south, Samaria in the north (with parts of the old northern empire) and Judea around Jerusalem.