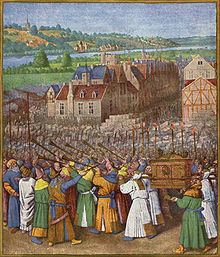 Rahab ( Hebrew רָחָב, rāḥāb ) is the name of the woman in the Old Testament who, according to the report of the capture and destruction of Jericho by the Israelites ( Jos 2  EU ), hid and saved two spies sent by Joshua in her house. As a result, after Jos 6  EU, she and her family were able to survive the massacre of all other residents and the complete destruction of the city.

In the book of Joshua (2.1 EU ; 6.17.25 EU ) and in the New Testament ( Heb 11.31  EU ; Jak 2.25  EU ) Rahab is referred to as a whore . In the corresponding report of the capture of Jericho by the Jewish historian Flavius ​​Josephus , this name is not used for Rahab. According to Josephus, Rahab was a landlady and housed the two spies in her inn ( Ant. 5,7f). The tradition that Rahab was a landlady is also followed by the Targum Jonathan (to Jos 2,1).

The origin of the name Rahab is not clear. It has been suggested that the name was an eponym of the Kenites or with other non-Israelite tribal or clan names of the formבֵית רָחָב( bēt rāḥāb , "dirnenhaus") or (Martin Noth) with the place name Bet-Rehob (בֵית־רְחֹב, "House on the public square", see: Ri 18.28  EU , 2 Sam 10.6  EU u. a.) are related. In the Talmud , the name Rahab is explained through a derivation with the Hebrew verbal root rḥb , “to spread, to open up wide”. An interpretation of the name from the Hebrew verbal root rḥb has also been suggested by more recent interpreters. On these hypotheses about the origin of the name Rahab, isolated further interpretations are based, which want to see a nickname alluding to the profession of prostitute. The name is primarily understood as a real feminine personal name, which was not brought about after a subsequent interpretation or etiology , and the tradition associated with it is considered to be of great age.