Woman in front of the mirror

Nichiren calms a storm near Kakuda

Utagawa Kuniyoshi ( Japanese 歌 川 国 芳 ; * 1798 in Edo (today: Tokyo ), † 1861 ibid) was, together with Hiroshige and Kunisada, one of the three style-forming masters of Japanese woodblock prints at the end of the Edo period .

Utagawa Kuniyoshi was born in 1798 to the silk dyer Yanagiya Kichiemon. According to tradition, he helped his father design silk fabrics at an early age and attracted public attention when he wore a cotton kimono that he had painted himself for a Shinto festival. As a child he was called Yoshizō (or Yoshisaburō), his later real name was Ikusa Magosaburō.

Kuniyoshi's father was friends with Toyokuni I , the head of the Utagawa School. In 1808, Kuninao (1793-1854) seems to have been a guest at the Kichiemon family home for a while as a pupil of Toyokuni. From this the boy could have received his first drawing lessons. From 1808 there is also a meeting with Toyokuni himself, who praised the young Kuniyoshi for a drawing of the demon hunter Shōki.

According to a Japanese source, however, neither Kuninao nor Toyokuni, but Katsukawa Shun'ei was Kuniyoshi 's first actual drawing and painting teacher. From this he learned to draw comical and fantastic scenes as well as the representation of the scenes and actors of the popular Kabuki theater. In 1811 Toyokuni finally took him on as an apprentice in his workshop, which at the time was a leader in the design of kabuki and actor portrait prints and the illustration of contemporary entertainment literature. His apprenticeship ended in 1814 and he received the stage name Kuniyoshi from his teacher.

In the same year he illustrated a book edition of Chushingura ; A few kabuki prints and two other book illustrations by him are known from the following year. In 1816 there was only one book illustration. In 1817 nothing appeared from his hand and in the period from 1818 to 1826 there were only a few publishers for whom he could design triptychs with heroic scenes ( Musha-e ) from Japanese history.

During these years Kuniyoshi could not have made a living by designing colored woodblock prints. According to legend, he made a living in the poorest of circumstances selling and repairing floor mats. He is said to have had a humiliating encounter with his former classmate Kunisada around 1817, which spurred him on to increased artistic endeavors, as he always felt superior to them. In fact, Kunisada was 12 years older than Kuniyoshi and was already recognized as a book illustrator and designer of woodblock prints in 1811 when he joined Toyokuni's workshop and was able to make a living from this activity. Kunisada would have had no reason for rivalry or humiliation. Kuniyoshi's designs simply hadn't met with the public's approval.

Until 1826 he must have worked as a craftsman in another profession, possibly again in his father's business, and on the side drew some designs for colored woodcuts. In any case, he was able to start a family himself by 1820; His marriage to a member of the Iwara family is recorded (other information: Saitō family).

In 1827 the publisher Kagaya Kichibei commissioned him to design initially five sheets from the series “The 108 Heroes of Suikoden ”. They became Kuniyoshi's first big hit with the public. The prints sold well, the series was actually published in full, and all of the sheets were drawn by Kuniyoshi. The breakthrough was made. A short time later, a similarly extensive series with Japanese heroes of the Suikoden appeared. This was followed by orders for other heroic depictions , book illustrations, including Shunga productions, and depictions of the Chushingura story. In the 1830s his artistic activity extended to the design of bijin-ga , kabuki scenes and some landscape prints. He received orders for the design of surimono and probably also the first orders from members of the merchant class for the execution of paintings. The latter in particular was associated with considerable income, because the fees for such pictures roughly corresponded to the annual income of a craftsman, whereas several designs for color woodcuts per day were necessary to secure a daily income.

By 1842 Kuniyoshi's position in the world of ukiyo-e was finally established, now he was one of the three leading masters of this genre in Edo, along with Kunisada and Hiroshige.

The Tenpo reforms of 1842 brought about radical changes for Kuniyoshi, as they did for the entire woodblock print market. Acting, actor portraits and the depiction of prostitutes, courtesans and geisha had been banned and the artists were therefore forced to turn to other subjects. In the first years after the reforms, Kuniyoshi designed joke pictures, some of his cat pictures, prints for the "upbringing and edification" of housewives and children, and prints of Japanese heroes to strengthen "custom, morality and virtue" in the population.

In connection with the reforms, Kuniyoshi was warned by the authorities in 1843 for pressure because he was seen as a forbidden caricature of the Shogun Iyeyoshi and his first minister, Nichizen. The printing plates were destroyed and the incident had no further consequences for Kuniyoshi.

In the second half of the 1840s, together with Kunisada and Hiroshige, he (among many others) drew the drafts for two large series, which apparently contradicted the regulations of the censorship authorities, as they were current kabuki actors under the pretext of portraying heroic or mystical events showed. The authorities did not intervene and by the end of the 1840s / beginning of the 1850s, publishers, artists and the public, contrary to the existing ban, braved the re-performance of the kabuki theater and its actors. After all, before the ban, these prints had made up around 80 percent of the total production of colored woodblock prints, and it was these that were mainly bought by the ordinary inhabitants of Edo and made up the daily bread of the artists.

Until 1855 Kuniyoshi was active in all areas of the color woodcut on a large scale. In 1853 a police report confirmed that he had a substantial income and could afford to distribute it generously among his students. From the years around 1850, several series that depict the heroes of Chushingura deserve special mention. He is also known to have painted murals for various temples and a brothel in the Yoshiwara neighborhood; however, these have not been preserved.

After 1855 his work was limited to the illustration of a very extensive Hideyoshi biography and the design of a few hero triptychs. Since that year, the year of the great earthquake in Edo, he appeared to have been seriously ill. According to the western calendar, he died on April 14, 1861, plagued by gout. He was buried at Daisenji Temple. Twelve years after his death, 45 of his surviving students had a grave stele erected in his memory. 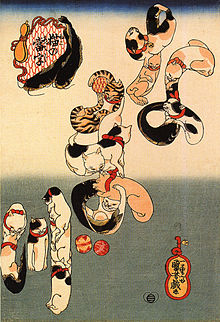 Most of Kuniyoshi's work consists of theatrical and actor prints. They often cannot compare with the work of Kunisada, the leading artist of his time in this field.

Today's western observer is impressed by his comparatively few landscape pictures in which he ingeniously processed western design elements, especially the central perspective. There were also Japanese forerunners and models for this, such as B. Toyoharu, Toyohisa, Kunitora and Hokusai. But like their works, Kuniyoshi's designs did not meet with great approval from his contemporaries.

The humorous side of Kuniyoshi includes the numerous cat pictures or pictures in which cats appear incidentally. The print “Neko no ateji” (for example “phonetic description with cats”) may serve as an example.

He is known and famous in the West primarily because of his heroic portrayal, which are impressively dynamic and repeatedly show surprising, imaginative details. In this area, too, he was not the first and only Japanese artist to create such pictures (e.g. in Shigemasa, Masayoshi and Hokusai there were models), but none of them can be compared with him in terms of the wealth of shapes and designs. This championship had already found recognition from his contemporaries.