Balinese dancer in front of a barong , the king of good spirits in a lion-like shape

A spirit being or simply spirit is, according to a worldwide conception, an immaterial or (mostly) “subtle” being to which superhuman but limited abilities are ascribed. In religious systems the spirit beings are ranked under God (or several gods). In some cases, spirits are imagined to be bound to material objects or living beings, in other cases to be understood as unbound. Spirit beings are part of numerous religions and myths and are regarded as conveyors of messages from the hereafter .

Modern forms of belief in spirits, in which the possibility of establishing contact is the focus, is called spiritism . These include the individual and often not religious verorteten seances to necromancy in Western cultures, which were particularly common at the turn of the 20th century in some circles, as well as the collective syncretic Afro-American new religions like Voodoo , Umbanda and Candomblé . Spiritism is estimated to have over 100 million followers worldwide.

A distinction is made predominantly between ancestral spirits and spirits of the dead ( called ghosts in English literature ), which mostly come from people who were not properly buried or who died by force; as well as, on the other hand, nature spirits , which are presented in nature independently of humans.

There are several types of such ideas:

Depiction of a guardian spirit by Joram Mariga, a Zimbabwean artist

In many ethnic religions - which today, however, are rarely unaffected - there is the idea of protective spirits who are tied to a location, a person or a community . They each protect against negative influences - but only if the ritual and moral customs are observed. In this context, the personal guardian spirits of the North American Indians are known in particular (which were incorrectly referred to as totems in earlier ethnology ) as well as the "outer souls" of some Central and South American ethnic groups.

Many North American Indians went on a vision search at some point in their lives in order to find the animal, plant, mineral or similar whose spirit was devoted to humans as a personal protective spirit. Once such a spirit was found, the one under protection often drew considerable spiritual power from it. The guardian or auxiliary spirits of shamans played a similar role.

In the beliefs of some peoples, the guardian spirit is presented as an outer soul, shadow or spiritual doppelganger (alter ego) who lives in a strange living being, but is nevertheless mutually connected with humans for better or for worse. If such a spirit animal is caught, the person belonging to it is also in danger. Have been widely described here nagual of the Aztecs and the Nonish the Waika of Venezuela.

In South and Southeast Asia as well as in large parts of Africa there are guardian spirits for regions of different sizes , which are often in a hierarchical relationship to one another. Elaborate communal and state cults are dedicated to the most powerful of them . In addition, they often determine the power of the political rulers: they legitimize their position and are often the highest priests of these spirits at the same time .

Closely related to the ideas of the guardian spirit of the animistic religions are the guardian angels of Christianity and Judaism .

The existence of spirits between belief and superstition

Joseph Henry Sharp : Prayer to the Spirit of the Ox. Blackfoot ceremony . 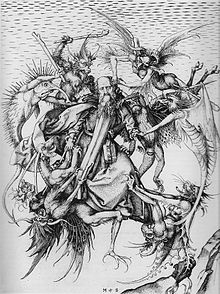 Hunger ghosts Preta, who, according to the Thai Buddhist worldview, as it is handed down in the textbook Traibhumikatha completed in 1345, suffer torments in one of eight regions of hell. Wall painting in the Phutthaisawan Chapel of the Bangkok National Museum . School of Rattanakosin, late 18th century.

"The physical process in the brain [...] contains [something] that is beyond calculation."

The conception of spiritual beings is directly related to the personal experience of humans to perceive themselves as physical and spiritual beings at the same time . The extensive results of worldwide ethnological research prove the great importance of such spiritual imaginations among traditional peoples as necessary "connecting pieces" in the establishment of cosmological patterns of order that serve as the basis for complete and coherent worldviews .

In this respect, at least parts of the population were probably deeply convinced of the existence of incorporeal beings at all times and in all cultures. For example, angels, demons, devils, spirits of the dead and even some nature spirits (example field spirits in goat form according to Isa. 13:21) are also considered reality in Christianity.But the skepticism and negation of otherworldly beings also has a long tradition, which can be found, for example, in European History can be traced back to ancient Greece. Homer already lists practically all the arguments that have been used over time for and against the existence of ghosts.

In the philosophy of the Enlightenment , the existence of God, and consequently also of spiritual beings, is increasingly doubted. But even famous philosophers such as Immanuel Kant (“Dreams of a Ghost Seer” from 1766) did not really succeed in refuting the “non-existent fantasies” despite extensive, subtle arguments.

In the middle of the 19th century, scientific research into ghost apparitions began in industrialized countries with the establishment of parapsychology . With the help of so-called media (people who claim to receive messages from supernatural beings or to have other types of “non-physical” perceptions) necromancy was carried out under controlled conditions . Later photography was used to make such phenomena visible and to record. As early as the first quarter of the 20th century, all these attempts were exposed as fraud. In the 1980s, a renaissance of occultism took place in the USA and later in England , in which, within a few months, many people suddenly claim to have been sexually abused as part of “satanic rituals”. But even the subsequent investigations by the police, courts and scientists did not produce any solid evidence for the existence of spiritual beings.

Today, historical descriptions of spiritual beings in the sciences are almost exclusively understood as naturalized metaphors , as illustrations for processes that people at the time could not explain, describe or process better. In this way, frightening, disturbing phenomena have been for the mind loading cross -bar and categorized - consequently they lost much of its menace. For the modern, enlightened person, it is more the other way round: The ghost motif makes the known and familiar world seem uncanny.

In contrast to the western world , the existence of ghosts and other occult powers in Africa is a broad social consensus, although there, too, debates about fraudulent spirit media are carried out and the attitudes of modern science on the subject are known. Even in the Christianized and Islamized countries, people assume that these powers have more or less a say in everyday life. The cosmology of traditional religions is omnipresent; Wizards, sorcerers and spirit healers are still important people in most African countries and magical acts to influence spirits and their "deeds" are not uncommon in an urban context.

In the Islamic cultural area , the idea of ​​spirits was generally accepted, as was the possible encounter between transcendent spirits such as angels ( Malʾak ) and devils ( Šayāṭīn ). While the angels and devils are only recognizable to the physical world on special occasions, the world is inhabited by a multitude of demons , such as the diwen and the jinn , which humans could encounter at any time. In addition to such demons, there is also belief in the spirits of the deceased, which can be divided into three categories:

The belief in spirits of the deceased, as well as the belief that people could encounter spirits, was criticized as superstition in the course of the Salafi movement and equated with Schirk . The alleged encounters of different spirit beings were summarized under Djinn . According to this, Djinns would play tricks on people and make them believe, by mistake, that they would encounter ghosts in order to lead them to the shirk. This notion differs significantly from the original belief in spirits in Islamic culture.