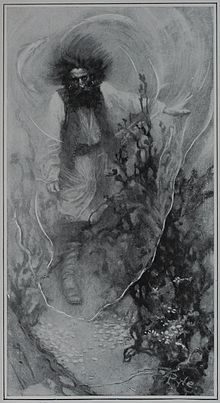 As a ghost who describes popular belief , a mostly equipped with supernatural abilities, but also with human provided properties spirits , the "haunted" - so people in any way "appears". Its temporary appearance often takes place in a hazy, transparent, implied human or non-human form. There are ghosts in the imaginations of different cultures .

In the narrower sense of the word, ghosts are only the spirits of the dead .

There is no materialistic - empirical evidence for the existence of ghosts.

natural Science
From a scientific point of view, the existence of such phenomena is therefore not recognized. From a historical perspective, alleged ghosts are often explained as a subjective, unintentional misinterpretation of natural phenomena that have not yet been recorded.
psychology
From a psychological point of view, ghosts are interpreted as phenomena that are present in the imagination of those who perceive them.
medicine
From a medical-neurological point of view, ghosts are explained as hallucinations or the result of incorrect processing of sensory stimuli in the brain . In a dissonance experiment (Olaf Blanke, 2014), Swiss neuroscientists at the Technical University of Lausanne succeeded in deliberately evoking a ghost appearance under laboratory conditions. Hand movements carried out by the test participants were repeated asynchronously in time on their back by a robot hand. The resulting discrepancy in the sensorimotor brain signals led to impaired proprioception, and as a result the participants reported the illusion that they had perceived another person in the test laboratory.

The idea of ​​the existence of a spirit world can be viewed as prehistoric. They presuppose early religious interpretations and mythologies. In a broader sense, ideas of spirits of the dead or other ghosts are added to this world of nature spirits .

The belief in ghosts in the narrower sense, as a result of a distinction between gods and spirits, can often no longer be assigned to the realm of religion . From Enlightenment view is, in a negative rating, simply to superstition .

Numerous alleged ghost phenomena are based on an illusion . Hardly perceptible physical effects have reproducible effects on many people: a sudden drop in temperature inside buildings is perceived by many people as a touch stimulus. An example of the physical causes of ghost sightings is the Brocken Ghost . By cleverly arranging a magnetic field, one can fool a person's brain into such a way that chimeras form. So the person then imagines they see a ghost or hear a breathing. Recent research has also shown an interplay of various physical phenomena, such as the air vibrations at low frequencies (wind against stronger castle walls) and the natural resonance of the eyeball (seeing white spots).

Many alleged ghostly apparitions are deliberate frauds and deceptions. One such fraud was the " Chopper " that appeared in 1982 in a Neutraubling dental practice .

Classifications of the ghost world are questionable insofar as they relate to assumed actual phenomena. Some differentiate between so-called demons , elementals , angels and familiars . According to George Tyrrell (see the "Literature" section ) and others, there are four or five main categories of ghosts or ghosts:

The spiritualism assumes that the souls of the dead ghosts are in the afterlife exist and can appear in this world. Such spirits of the dead not only appear randomly and unpredictably, for example to frighten people or to convey messages to them, they can supposedly also be conjured up by so-called media through materialization and then have superior knowledge of past or future events in the expectation of their listeners.

Local ghost phenomena are often interpreted as the attachment of an “unredeemed” soul to a specific location, such as the scene of a crime committed or suffered. The clarification of the fact can lead to the redemption of the ghost. Even a burial that is not ritually performed correctly can lead to the appearance of a spirit of the dead.

The assumed abilities of ghosts include floating weightlessly and penetrating walls or people. Some ghosts can generate noises, communicate verbally, make them visible or invisible, or take on different external shapes. Their appearance often triggers a strong sensation of cold (grave cold). All in all, the encounter with ghosts is eerie and frightening, although it remains unclear what exactly the specific danger is.

Even in modern times there are reports of ghostly phenomena. The following examples from more recent times make it clear, however, that such phenomena are usually based on rational causes.

"Appearances are deceptive": photomontage of a ghost apparition

There are numerous descriptions of ghosts in folk tales , mythological texts or fairy tales , including the jinn from 1001 nights . They also appear in classical and romantic literature ( Shakespeare's Hamlet ; Goethe's Bride of Corinth ) or in ghost stories , ghost novels and ghost thrillers (e.g. ghost hunter John Sinclair and in the television series Supernatural, where the brothers Sam and Dean hunt ghosts and other phenomena ; partly also in "Christoph Schwarz - Detective of the Supersensible"). Friedrich Schiller's fragment of the novel " Der Geisterseher " ( The Ghost Seer ) deals with the deception by an alleged spiritualistic medium. Heinrich Heine picks up on a “ghost phenomenon” in his story “ Die Harzreise ” in a particularly “witty” way : the first-person narrator spends the night in a strange guesthouse room when the moon is full. He's reading a ghost story. At midnight sharp, the ghost of the recently deceased Saul Ascher appears to him and, quoting Immanuel Kant , proves that there can be no ghosts. Nevertheless, the phenomenon only disappears at one o'clock sharp. The lesson of history is that the knowledge of the non-existence of ghosts does not make their perception disappear if the fear is greater than the will to reason. Oscar Wilde's The Canterville Ghost takes up the subject satirically . For children, Otfried Preußler tells about the little ghost . And the series of radio plays and the film “ Hui Buh das Schlossgespenst” by Eberhard Alexander-Burgh is also about a ghost that is up to mischief in a castle. With his play The fearful ghost , Friedrich Arndt created a milestone in modern puppetry for children and a bestseller as a radio play .

The film industry finds a rich supply of material in the belief in ghosts, but also enriches the imagination of its consumers. The Ghostbusters cinema films, in which para-scientists in New York captured various ghosts with proton beams and ghost traps , provided a humorous portrayal of the subject . The ghost is the title of a tragicomic film by Herbert Achternbusch , shot in 1982 , in which a life-size figure of Christ can no longer stand on the cross, but rather as a " waiter " who has come to life into the bed of a matron or as a waiter in a monastery tavern Trouble with the police , with which Bishop and Munich causes passers-by. The film raises the question of how Jesus would be treated if he showed up in Bavaria today, and provoked violent protests from the German bishops over allegations of numerous bad taste, so that the public prosecutor had to deal with him. Bruce Willis ' protégé has to deal with spirits of the dead in " The Sixth Sense ". The film “ The Others ” also takes a slightly different approach, turning the classic spook upside down at the end. Nicole Kidman stars in this 2001 film. Ghost Hunters is a docu-soap in which a team of self-proclaimed ghost hunters visit places that are supposed to be haunted. There they investigate to prove (sometimes disprove) the ghost. In the 2008 comedy film " Who the Ghosts Love ", a dentist played by Ricky Gervais has to help ghosts with their unfinished business so that they can die for good.

Popular belief, vernacular and the arts have taken up the "ghost" again and again. Probably the most famous relevant quote opens the Communist Manifesto by Karl Marx and Friedrich Engels :

"A ghost is haunting Europe - the ghost of communism."

Causes of Belief in Ghosts

The purely formal psychology explains the belief in spirits as a personification of death or the soul .