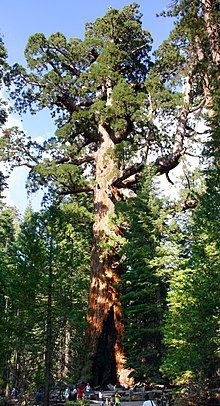 The Grizzly Giant in Yosemite National Park is about 64 meters high and around 3000 years old.

The giant sequoia ( Sequoiadendron giganteum ), occasionally mountain sequoia or Welling Tonie called, is the only kind in the monotypic genus Sequoiadendron in the subfamily of the Sequoias (Sequoioideae) within the family of the cypress family (Cupressaceae). It is native to the western slopes of the Sierra Nevada in California .

The giant sequoia is an evergreen tree that can reach heights of up to 95 meters and a trunk circumference of over 34 meters at the very wide base. In the case of the largest specimens, the trunk diameter measured just above the ground can be over 10 meters, and measured at a height of 1.30 m as diameter at chest height over 8 meters. The tree forms a high, narrow, conical crown , whereby the trunks can be free of knots for up to 50 meters in length when they are old. The crowns of the famous, largest specimens, which are over three thousand years old, often show traces of storm damage and lightning damage.

The growth of young trees only increases moderately quickly, but the trunk circumference increases exceptionally quickly. In experimental forest cultivation, annual increases of over 30  solid cubic meters per hectare were recorded. With up to 95 m, the giant sequoia is not as high as its relative, the coastal redwood , which can grow up to 115 m. In return, the giant sequoia tree has a larger trunk diameter and is therefore significantly more massive. The General Sherman Tree is the largest living tree on earth with a trunk volume of 1,486.9 cubic meters (52,508 cubic feet ), according to earlier data 1,489 cubic meters. 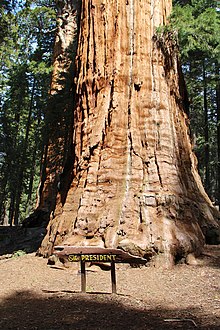 The President Tree , whose trunk is around 28 m in circumferenceclose to theground, and behind it with a similar circumference, the Chief Sequoyah Tree are in the Giant Forest of the Sequoia National Park not far from the General Sherman Tree

With an age of about 3200 years, the tree called President is one of the oldest living giant sequoias in the Sierra Nevada of California . At the turn of the 20th century, two specimens were cut down in the Converse Basin of what is now the Giant Sequoia National Monument . Their ages can be determined to be 3220 and 3266 years. 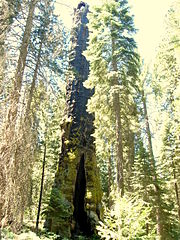 There is also the Muir Snag - a stump named after John Muir - as the trunk of a dead tree, the age of which is estimated to be over 3500 years based on an incomplete annual ring count. Giant sequoias are rarely thrown alive by the storm, but sometimes die from fungal diseases. Due to their height, older trees are more likely to be struck by lightning. They also lose branches when the snow breaks. Younger specimens that have not yet developed a protective thick bark are more at risk from forest fires.

A calendar for dendrochronology can be created from drill cores based on the annual rings , which can be used for the scientific dating of wooden artifacts . The tree ring sequences of the Sequoia chronology also give indications of changes in climatic factors and are primarily used to estimate extreme drought events in the past. The history of forest fires in the region can be reconstructed using the burn scars.

The foliage consists of narrow, pointed scale leaves or needles that are arranged in a spiral and run in three rows around the shoot. They are blue-green on young shoots, dark green on older ones. The needles are 3 to 6 mm long on side shoots, up to 15 mm on main shoots and up to 3 mm wide, their base runs down the branch. They are shed with the branch after about three to four years. 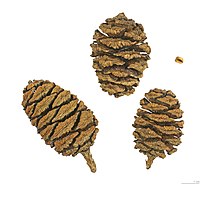 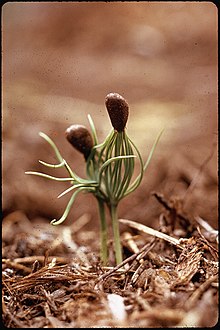 The giant sequoia is monoecious , it becomes manable from the age of 10 (to 15) years . The male flowers are at the end of short shoots. The female cones are usually single, sometimes in groups. They stand upright when they bloom. The pollination droplets that are formed on the ovule lie deep inside the cone and catch the pollen that has drifted by the wind, thereby pollinating them. The ovules are usually in two rows on the cone scales. The seeds ripen in the year after pollination. The cones still continue to grow, staying green for a long time and can remain unopened for over twenty years. They consist of about 25 spirally arranged cone scales, are bluntly egg-shaped, up to 8 cm long and contain an average of around 200 seeds.

Ripe cones hang down. The seeds are flat, about 3 to 6 mm long and have two wings. The cones stay on the tree for a long time and usually only release the seeds when they dry out or after exposure to strong heat, as occurs in a forest fire. The still green cones that are still growing can also give off their seed load. After forest fires, the germination and growth conditions are particularly good: the mineral soil, which is important for germination, is exposed and the lighting conditions are very favorable because the undergrowth is burned.

Older trees protect their thick bark from a forest fire

The giant sequoia ( Sequoiadendron giganteum ) has a red-brown heartwood , from which the light yellow sapwood is clearly separated. The wood is largely resin-free and essentially very durable. It has a kiln density of about 0.37 g / cm³ and is particularly brittle in the area of ​​branches and therefore breaks easily.

The fibrous, spongy bark in older trees is unusually thick (around 30 to 75 cm), quite soft, and contains tannins and is resin-free. It is orange-brown to dark red-brown and deeply longitudinally fissured. A special function of the bark is the protection against forest fires , as they often occur in the over a thousand years of life of some specimens; the tree is a pyrophyte .

In the natural area of ​​distribution, giant sequoia trees form a little deep, shallow and far-reaching root system. The roots of older trees usually do not penetrate more than a meter into the depth, but spread up to 30 meters sideways and can grow through areas of up to 0.3 hectares. In Central Europe, tap roots up to 1.80 meters deep were found on younger trees . 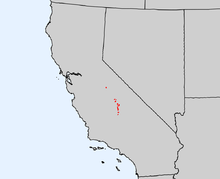 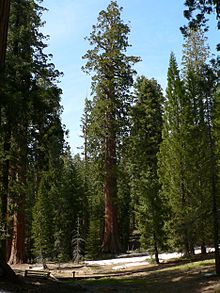 The home of the giant sequoia is on the western slopes of the Sierra Nevada in California at altitudes between 1350 and 2500 meters. There it grows in groves, in isolated valley gorges. There are 72 of these groves in total, ranging in size from 1 to 1600 hectares. The total area of ​​the deposit extends over a 420 km long strip, which is at most 24 km wide, and comprises a total stand area of ​​around 14,400 hectares. The giant sequoia is a species threatened with extinction in its natural range. Today only two thirds of the natural population are preserved. Most of them are under protection, for example in the Yosemite , Sequoia and Kings Canyon National Parks and in National Forests .

Outside of its present home, the giant sequoia is now spread worldwide through planting. In Western and Central Europe it has been grown as a largely hardy park tree since the middle of the 19th century. The oldest giant sequoia trees in Germany include the individual specimens in the Fürstenlager State Park and in the Altenstein Castle Park , each as an element of an early English landscape garden . In 1864 , Grand Duke Friedrich I of Baden had numerous specimens planted in an arboretum on the island of Mainau . King Wilhelm I of Württemberg (1816–1864) had seeds imported to Württemberg shortly before his death . 5000–8000 specimens were used in the so-called Wilhelma-Saat , 35 of which are still in the mammoth grove in the Wilhelma zoological garden in Stuttgart. Further specimens from this seed were planted all over southwest Germany. In 2014, at least 132 copies were still preserved.

In France and Germany, experimental forest cultivation of the giant sequoia is carried out, as its rapid growth in thickness and the good wood quality of young, branched trees compared to old specimens make the giant sequoia interesting for commercial logging. From 1952 on, research was carried out on test areas in the Sequoia farm in Kaldenkirchen to see whether this tree species could be introduced into German forestry. The genus Sequoiadendron was also native to Europe before the Ice Ages.

The natural area has humid climates with dry summers and snowy winters. Annual rainfall ranges from 450 to 1520 millimeters. For the giant sequoia to thrive, it is important that there is sufficient water available in the dry summer months. This is adequately guaranteed with the numerous and never-ending springs and streams in the Groves. Giant sequoia trees need well-ventilated soil, so that waterlogged locations are avoided. At winter temperatures below −20 ° C and with little snow cover, frost damage can occur in younger specimens, but older trees can withstand temperatures of up to −30 ° C.

Fossil finds indicate that the first representatives of this species were already native to the western United States 15 million years ago . Ancestors can be traced back to the Cretaceous 125 million years ago and were spread over large parts of the northern hemisphere.

Most of what was originally more extensive in the western United States has been cut down. Among the felled trees there were specimens much larger than the living ones. The so-called "father of the forest" is said to have been 135 meters high and a trunk diameter of 12 m. Accordingly, it would have been significantly higher than the currently tallest tree, the coastal redwood Hyperion with a height of 115 m.

This species was discovered by AT Dowd in 1852. In 1853 the botanist William Lobb and the Scot J. Matthew sent large quantities of seeds to Europe . The genus Sequoiadendron (like the other two genus of sequoia trees) was probably named after the Cherokee Indian Sequoyah , who developed the syllabary for the Cherokee language in the early 19th century .

The largest living giant sequoia, the General Sherman Tree , is in the Giant Forest in Sequoia National Park , is 83.8 meters (274.9  ft ) high and, according to recent measurements, has a trunk volume of 1,486.9 m³ (52,508  cft ). The tallest giant sequoia is an unnamed specimen in the Redwood Mountain Grove in Kings Canyon National Park at a height of 95 meters.

According to the trunk volume, the 10 largest representatives of the species Sequioadendron giganteum are :