The embryophyta , often also referred to as land plants , are a biological taxon that includes the seed plants , the ferns , the horsetails , the barnacles and the mosses . The eponymous feature of the common Embryophyta is the embryo , which in seed plants in seed resides. To date, 280,000 species are described about, including about 250,000 angiosperms (flowering plants). Around a fifth of them are threatened with extinction .

Life cycle of a flowering plant (covering plant). In the middle the sporophyte, left the female and right the male gametophyte.

The embryophyta are characterized by a heterophasic generation change , in which a haploid sexual and a diploid vegetative generation alternate (see nuclear phase change and diplohaplont ). The two generations are designed differently (heteromorphic generation change), whereby in vascular plants the diploid sporophyte is much larger than the haploid gametophyte , while it is the other way around in mosses . 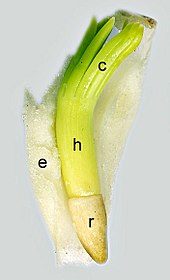 Embryo of a cedar with the cotyledons (c), the hypocotyl (h) and the radicula (r)

After fertilization , the sporophyte is initially created as a multicellular embryo (hence the name embryophyte ), which remains on the mother plant and is nourished by it. In the case of the seed plants, the mature seed with the embryo is a resting stage and is used for spreading. The embryo already consists of the three basic organs shoot axis , leaf and root , which are collectively referred to as the corm . Only the much more simply built sporophyte of the moss is not so differentiated. The leaves sit on the side of the stem and side shoots arise from their axils, through which the stem branches. The root, on the other hand, never has leaves, and it branches out by breaking out side roots from within.

Like algae , the embryophyta are photoautotrophic , i. H. both phototrophic and autotrophic . Phototrophic means that they cover their energy needs with light, and autotrophic that they can form organic substances from inorganic ones and do not have to take in organic substances as food like heterotrophic creatures (e.g. animals ). As a rule, they only use carbon dioxide as a source of carbon . The structure of these substances with light as an energy source is photosynthesis . Heterotrophic plants are always derived forms that have lost their chlorophyll (leaf green) in the course of evolution . These are various mycotrophic plants that are nourished by fungi (e.g. some orchids , Corsiaceae , Burmanniaceae ) and parasites on other plants, e.g. B. the Rafflesiaceae and some Orobanchaceae and bindweed ( Cuscuta ).

Other characteristics of the superordinate taxa Charophyta and Chloroplastida are chloroplasts with chlorophyll a and b as photosynthetic pigments and carotenoids as accessory pigments, starch as a reserve polysaccharide and cell walls with cellulose as the main component. The spore wall or the exine of the pollen grain contains sporopollenin . The sporophyte is surrounded by a cuticle that serves as protection against drying out through evaporation.

The growth of the stem axis and the root occurs apically, i.e. H. at the top, in that cell divisions take place in a meristem (division-active zone) located there and the daughter cells located on the basal side then stretch ( elongation growth ) and also thicken (primary growth in thickness ) with a considerable increase in volume . The leaf systems also emerge from the meristem at the tip of the stem axis ( vegetation cone), with parts of the meristem separating out in a hump-like manner. In the further development of the leaves, there is often intercalary growth in that apart from the marginal meristem, cell divisions and elongations occur. B. leaf stalks arise. In addition, there is secondary growth in perennial woody plants, which causes tree trunks, for example, to become thicker and thicker.

The phylogeny of plants. Algae are also part of the plant kingdom here. Paraphyletic groups are marked in blue. Origin of plants: Symbiogenesis between a cyanobacterium and a two-flagellated protozoon of the clade Diaphoretickes .

The genealogical closest relatives of the Embryophyta are a group of algae taxa that used to belong to the “green algae” and are grouped with them as Charophyta . For some years now, the charophyta, the most morphologically complex besides the embryophyta, the chandelier algae , have been considered the closest relatives with whom they would form a taxon called Streptophyta . More recent, especially genetic studies instead suggest that the ornamental algae, which only form simple cell threads, are the closest relatives. The Charophyta besides the Embryophyta are haplonts , i. H. with the exception of the zygote haploid. The embryophyta developed the heterophasic generation change described above, whereby initially the haploid sexual generation predominated, but with the progressive emancipation from water the diploid vegetative generation came more and more to the fore. (See also: The generation change in the phylogenetic history of plants and evolution of the life cycle of plants .)

The transition from the aquatic to the terrestrial way of life ( shore leave ) was apparently made possible by a symbiosis with fungi ( mycorrhiza ). According to a study from 2018, this probably happened in the Cambrian , around 500 million years ago and thus much earlier than previously assumed.

The sometimes held view that there are several lineages of the embryophyta from the algae has already been recognized as improbable by morphological studies. This is also not supported by molecular biological studies and is therefore no longer supported today. Whether the special cellular adaptations of the embryophyta to rural life, such as the particularly stable cell wall with the storage of phenolic compounds such as lignin , the particularly sophisticated reaction pathways to environmental stress or the protection against destructive influences due to excessive exposure, even for those living in freshwater simply built ancestors evolved ( i.e. were a pre- adaptation or exaptation ), or whether these properties developed as an adaptation on land, is scientifically controversial to this day.

The relationship between the embryophyta and the green algae had long been suspected due to the common photosynthetic pigments (chlorophyll a and b) and the occurrence of polysaccharides (real starch). Molecular biology, however, has determined that only a small part of the originally broad green algae is located near the embryophyta and only this with the embryophyta belongs to the group of charophyta. DNA sequence comparisons showed that the macroscopic chandelier algae , which already form morphological complexity through a tissue that envelops their egg cells, are the closest living relatives of the embryophyta. Together they form the group of Streptophyta . A cladogram for this looks like this:

The recent representatives of the Embryophyta form four clearly separated groups. According to both morphological and molecular biological studies, these are monophyletic : liverworts, leaf mosses, hornworts and vascular plants. The position of these four groups among each other has not yet been finally clarified. In the past there have been various suggestions (see systematics of mosses ), but the following cladogram emerges as a probable relationship:

The hornworts would therefore be the sister group of vascular plants. In addition to molecular biological studies, several characteristics peculiar to horn mosses in comparison to other mosses point to the close relationship to vascular plants: the sporophytes of horn mosses are relatively large, long-lived and photosynthetically active, i.e. relatively independent. Thus they occupy an intermediate position between the other mosses with their gametophyte-dependent sporophytes and the vascular plants with their completely independent sporophytes. Accordingly, as originally thought, mosses are not a monophyletic, but a paraphyletic group.

For a more detailed overview of the plant kingdom see Systematics of the Plant Kingdom .

When including fossil plants that are at the base of the vascular plants, the picture above becomes a little more complicated. Fossil mosses from the early days of the embryophyta are not known, but many representatives of early vascular plants are known. These were combined under the term psilophytes in the early 20th century , but this group soon proved to be very heterogeneous. Banks has split this group into the three groups Rhyniophyta , Trimerophytophyta and Zosterophyllophyta . However, Kenrick and Crane showed in 1997 that at least the first two groups are artificial. The representatives of the last two groups belong to the eutracheophytes, while the representatives of the Rhyniophyta are very basal. Kenrick and Crane made the following cladogram:

Between the mosses (not shown) and the vascular plants there are still some groups of extinct plants.

The polysporangiophytes include the entire clade shown above and include all embryophyta that are not counted to one of the moss groups. Their common derived features ( synapomorphies ) are: branched sporophytes with multiple sporangia; the sporophyte is independent of the gametophyte. The archegonia are sunk into the gametophytes, but this is also the case with the hornworts.

The representatives of the polysporangiophytes include the most basic group, the Horneophytopsida with Horneophyton . An isolated species is Aglaophyton major . The other representatives belong to the vascular plants (Tracheobionta), the basal group of which are the Rhyniopsida .