The Hornmoose ( Anthocerotophyta ) are one of the departments of the Moose from the realm of plants . The division is divided into two classes , of which one ( Leiosporocerotopsida ) contains only one species, the other 100 to 150 species . 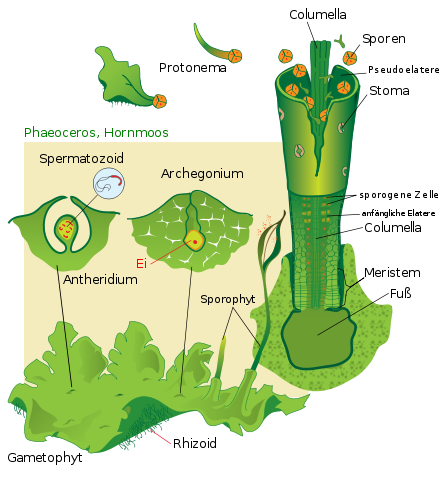 Generation cycle of the hornworts

The gametophyte of the hornworts is usually only a few centimeters in size. It is a flat, dark green, rosette-shaped thallus that is multilayered and lobed on the edge. The thallus consists of thin-walled cells and is attached to the subsurface with unicellular, smooth rhizoids . The cells of the thallus contain a large, bowl-shaped chloroplast with pyrenoids . Otherwise, this form only occurs in green algae . The thallus grows with a double-edged apical cell . The gametophyte also has stomata , another unique feature among mosses. The symmetrical spermatozoids with right-screw flagella are only found in horn mosses.

In the thallus there are (intercellular) cavities filled with mucus between the cells. Microscopic fungi and nitrogen-assimilating cyanobacteria of the genus Nostoc settle in these as symbionts . The symbionts penetrate the moss through the stomata on the underside.

In contrast to the other mosses, the sex cell containers ( gametangia ) are sunk into the thallus, so they are endogenous. The male gametangia, the antheridia , are usually several in initially closed cavities. The fertilized egg cell ( zygote ) first divides lengthways, while in the other mosses it divides transversely.

The diploid sporophyte is usually horn-shaped or pod-shaped. It is one to several centimeters high and opens with two longitudinal cracks. It is anchored in the thallus with a swollen base (foot, haustorium ). The connection between gametophyte and sporophyte is similar to that of the primitive fern Tmesipteris . The growth of the sporophyte occurs through a meristematic zone in the base area ( intercalary ). In principle, growth is unlimited; all stages of spore ripeness are found in a sporangium. The sporophyte has chloroplasts, is relatively long-lived and largely autotrophic . Inside the sporophyte is the columella , a longitudinal axis made of sterile tissue. It is surrounded by the sporogenic tissue ( archespor ). This is a loose parenchymal tissue and is in turn closed off by an epidermal tissue with stomata to the outside. This structure corresponds to a urteloma , with the columella being interpreted as a reduced vascular bundle .

Spore parent cells are formed from each archespore cell by division, which develop into four haploid spores through meiosis , and a pseudo- parent parent cell . Several longitudinal and transverse divisions result in several pseudo-elaters . The pseudo- elaters fulfill the same task as the elaters of the liverworts, since they arise differently, they are called pseudo- elaters .

The spore germinates into a short tube, which corresponds to the protonema of the other mosses, but is usually not designated as such. A thallus develops again from the end cell of the tube .

The hornworts are widespread in the temperate and tropical latitudes. The species in the tropics are usually persistent , while in the temperate latitudes they are mostly summer annual, i.e. they go through their life cycle from the germination of the spore to the opening capsule within a few months within the warm seasons, with horn moss mainly in summer and autumn. While the horn moss gametophyte cannot survive severe frosts, the spores can survive for several years in the diaspore bank of the soil.

The hornworts were originally placed with the liverworts because of their thallous structure. However, they also share some characteristics with the deciduous moss: the possession of stomata and the columella in the sporophyte. Therefore, in cladistic analyzes, they are sometimes together with the deciduous mosses. The chloroplast form is again very primitive and connects the hornworts with the green algae. The structure of the thallus again resembles the prothallium of the fern plants , just like the sporogon the sporophytes of Horneophyton , a fossil ancient fern . Since no fossil hornworts are known, the tribal history remains unclear.

Today it is mostly assumed that the mosses as well as the ferns developed from a common ancestor, which in turn descended from the green algae. Due to the relatively few common characteristics that connect the horn mosses with the other mosses, a polyphyletic descent of the mosses is assumed today and therefore the horn mosses are regarded as a separate division. The exact family relationships are still unclear.

The division contains two classes, one of which, the Leiosporocerotopsida, is monotypical . The Anthocerotophyta contain 12 to 14 genera with around 100 to 150 species.