Belém ([ beˈlẽj ], German: Bethlehem, officially Portuguese Município de Belém ) is a large city in northern Brazil ; it is located on the Baía de Guajará, the confluence of the Rio Guamá in the Rio Pará and the Bay of Marajó . Belém is the capital of the state of Pará .

Belém is, next to Manaus , the most important city in the Brazilian Amazon . That of mango trees lined streets downtown Belém owes the nickname "Cidade das Mangueiras" (city of mango trees).

The Belém area originally belonged to the Tupinambá area.

Belém was founded on January 12, 1616 by the Portuguese captain Francisco Caldeira Castelo Branco. It was founded with the establishment of the Forte do Presépio fortress (known today as Forte do Castelo ) with the aim of defending the region against attempts at conquest by the English, French and Dutch. 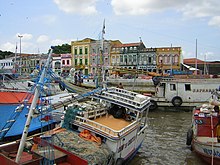 Far from the rest of the country and closely linked to Portugal , Belém did not recognize Brazilian independence until August 1823, almost a year after it was declared.

Between 1835 and 1840, Belém became the scene of the Revolta dos Cabanos uprising , also known as Cabanagem . This uprising is considered to be the one with the most authentic popular participation in the history of the country.

Due to the rubber boom , Belém achieved great economic importance at the end of the 19th and beginning of the 20th century. Magnificent buildings such as the Teatro da Paz (1878), Palácio Antônio Lemos, Palácio Lauro Sodré, Colégio Gentil Bitencourt and the Ver-o-Peso (1901) date from this period.

Although Belém is a bit off the usual tourist routes, there are some interesting buildings and facilities to visit:

Teatro da Paz, on the Praça da República. Built during the rubber boom , which is where many of the city's historic buildings stem from. The theater was renovated in 2001 and is now back in operation.

Other structures, markets and facilities

Catedral da Sé in the old town of Belém

Belém is the headquarters of two federal universities ( UFPA , UFRA ) and a state-sponsored university ( UEPA ). There are also private universities, e.g. B. UNAMA . The greater Belém area is also home to federal research institutes such as the Goeldi Museum , which is dedicated to the study of indigenous cultures and Amazonian ecosystems, and the Tropical Medicine Instituto Evandro Chagas (in Ananindeua ).

The Círio (de Nossa Senhora) de Nazaré (since 1790), held every year on the second weekend in October, is the city's largest festival and is considered the largest religious festival in Brazil: up to two million people come to the city and carry a statue of Mary in one Litter from the cathedral to the basilica through the streets, attached to it is an approximately 400 meter long, strong rope. Whoever can grasp the regularly hard-fought rope (“ pegar a corda ”), is faithfully forgiven for sins; this custom has already led to serious accidents. The procession ships the statue of the Virgin Mary and accompanies her in decorated boats across the bay. On this day, children are given small painted boats and animal figures made of the light wood of the leaf stalks of the Buriti palm , which is why hordes of traders from the surrounding area flock to the city with toys they have built themselves.

In 2013, the "Círio de Nazaré" in Belém was in the Representative List of Intangible Cultural Heritage of Humanity of UNESCO entered.

The cuisine of the Belém region is rich in Indian influences. Typical dishes are:

Roasted cassava flour (grated cassava root; farinha , seared and seasoned: farofa ) is omnipresent as a side dish , along with rice, black beans and various cold sauces with coriander leaves ( cheiro verde ), chopped tomatoes and onions or with peppers and other hot berries ( pimenta ). For dessert we recommend the sweet creams with pulp from Bacurí ( Platonia insignis , Clusiaceae ) and Cupuaçu ( Theobroma grandiflorum , Malvaceae ).

→ Main article : List of sons and daughters of the city of Belém (Pará)

Archdiocese of Belém do Pará

The climate is extremely warm with only minor fluctuations. The temperature rarely falls below 20 ° C.