2018 is considered to be the super election year for which summer time has been postponed due to the most uniform possible polling station opening times.

Brazil has a presidential system of government . Therefore, the presidential election is the most important election to be held in Brazil in 2018. The president is elected for four years. Whoever receives the absolute majority of the valid votes is elected.

Incumbent Michel Temer took over the business of government as Vice President on May 12, 2016 for the period of the maximum six-month suspension of the then President Dilma Rousseff . After the Senate finally voted for the impeachment of Rousseff, Temer was installed as President of Brazil on August 31, 2016 and formed the liberal-conservative government of Temer . At the end of 2016, however, the judiciary banned Temer from running again because he had violated electoral laws.

The new President's term of office begins on January 1, 2019.

The candidates nominated by their parties and their registration submitted to the Supreme Electoral Court:

First round of presidential elections 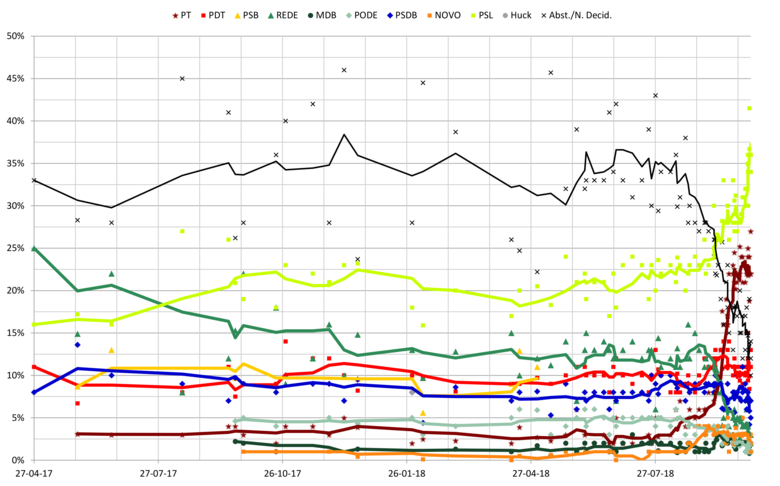 The graph represents the mean values ​​of polls on the voting intentions of Brazilians in the 2018 presidential election. Each line represents a political party (see legend at the top). Parties are shown instead of candidates because some parties changed their candidates. Candidates who are not eligible for election, such as Lula da Silva (see the chapter on judicial power struggle in advance), are not shown in the graphic.

The graph represents the mean values ​​of polls on the voting intentions of Brazilians in the 2018 presidential election. Each line represents a political party (see legend at the top). Parties are shown instead of candidates because some parties changed their candidates. Candidates who are not eligible for election, such as Lula da Silva (see the chapter on judicial power struggle in advance), are not shown in the graphic.

According to all polls, the most promising candidate for the presidential election, former President Luiz Inácio Lula da Silva , was convicted of corruption in the second instance on January 25, 2018 and was therefore not allowed to run. Ironically, one of the reasons for this was that he was not allowed to compete due to the so-called Clean West Act ( Ficha Limpa ) he passed himself in 2010 . This law prohibits the candidacy of politicians who have been convicted in the second instance. Da Silva is currently in prison in Curitiba . A legal battle over his release made international headlines during the Brazilian election campaign. The judges' power struggle had a decisive impact on Brazil's political future.

Role of the media

The number of political advertisements on TV is regulated in detail by law in elections in Brazil and depends on past election successes. For the 2018 presidential election, this results in the following maximum permitted weekly TV spots: Alckmin (80), the as yet unknown candidate of the PT (27), Bolsonaro (3).

The duration of TV advertising is regulated in a similar way. It will be broadcast from August 31 to October 4 in advertising blocks of 12 minutes and 30 seconds each. The biggest changes in opinion polls in previous Brazilian presidential elections only occurred after political advertising began on TV. It was and is therefore important which candidate is allocated how much of the advertising time broadcast free of charge by public broadcasters.

According to the Brazilian opinion research institute IBOPE , around a third of Brazilian voters say that their voting decision is based mainly on information from TV or the Internet.

Election of the Senate

54 of 81 senators representing their home states are elected. Each state and federal district appoints three senators for an eight-year term, double that of a normal legislature.

357 candidates have registered for the 54 senatorial posts to be elected, including Dilma Rousseff for Minas Gerais .

Election of the Chamber of Deputies

513 federal MPs are elected to represent their home states. The number per state varies depending on the population.

The 2018 gubernatorial elections in Brazil took place on Sunday, October 7, 2018, at the same time as the presidential and state and national parliamentary elections. The 27 governors and their lieutenants from the Brazilian states and the federal district were elected .

A total of 199 candidates applied for the post of governor, who were registered in the respective regional electoral court, the Tribunal Regional Eleitoral .

The 1024 members of the 27 parliaments ( Portuguese: Assembleias Legislativas ) are elected.