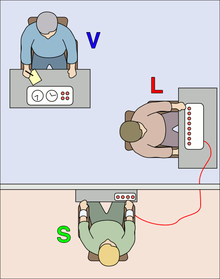 Stanley Milgram (born August 15, 1933 in New York City , † December 20, 1984 there ) was an American psychologist . His most famous experiment on willingness to obey authority is now known as the Milgram experiment .

Stanley Milgram was born on August 15, 1933 in New York City. His father was Hungarian, his mother Romanian, both Jewish immigrants. In 1950 he graduated from James Monroe High School with his school friend Philip Zimbardo . Four years later he received his bachelor's degree from Queens College . Milgram received his PhD from Harvard University under Gordon Allport . He then became a full professor at the Graduate Center of the City University of New York . In 1983 he was appointed a member of the American Academy of Arts and Sciences . In 1984, Milgram died of a heart attack at the age of 51. He left behind his wife and two children.

Milgram was best known for his work on obedience to authorities . In his experiments , now known as the Milgram experiment, he showed that the majority of average people allow themselves to be induced by alleged authorities to systematically abuse other people (in this case using electric shocks).

His work is seen as particularly important in understanding how previously inconspicuous people can commit atrocities. But it also aroused opposition because it implied that a large proportion of people were potentially cruel. Representatives of ideologies that postulate the “good in people” were particularly attacked.

For a better understanding of his work, Milgram names some important requirements for the behavior of people under authoritarian influence, because

a) they bring with them from birth important factors for willingness to be obedient and, in dealing with their parents, experience the first important conditions for survival in a society that requires a certain degree of obedience,
b) did they take the necessity of obedience deeper into their consciousness during training,
c) they are further trimmed in their job so that obedience leads to success and
d) advances obedience at work (reward as positive reinforcement through advancement).

Obedience is therefore a normal process that shapes societies. However, one has to ask to what extent obedience is still appropriate in certain situations. This is where Milgram's investigation begins. The results of the Milgram experiment are considered to be well established and could be reproduced in numerous subsequent experiments.

Milgram coined after another attempt in which he u. a. made the post for purposes of social research available, the concept of small-world phenomenon ( small world phenomenon ).

Before he could investigate the small world phenomenon, Milgram developed the so-called "lost letter technique" in 1960. This non-reactive method is used to research the attitudes of a population in a certain test area without social influences such as expected social desirability being reflected in the responses to the survey , as is the case with conventional methods . This was done by letters that were fully addressed and franked and left behind in the test area, giving the impression that they had been lost. They were addressed (in addition to private individuals) to people who clearly belonged to a group or institution, such as a medical research institution, the Communist Party or the National Socialists. From the number of letters that the residents helpfully forwarded to the address, i.e. thrown into the mailbox, the experimenter concluded that the population was attitudes towards the groups.

According to Milgram, people in large cities suffer from overstimulation, from which they isolate themselves through social withdrawal. This makes interpersonal relationships more superficial, the frequency of prosocial behavior decreases, etc., see Urban Overload Hypothesis .