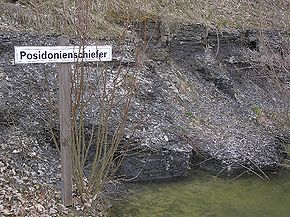 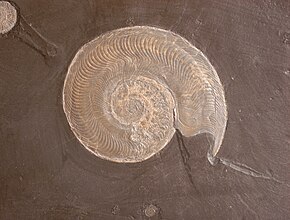 The Posidonia slate or Swabian oil shale is an asphalt-gray to deep black bituminous mudstone from the Lower Jurassic , which extends over large areas of Central and Northwestern Europe . The rock is known for its exceptionally good fossil preservation , which has made the Posidonia schist a world-class conservation deposit. The Posidonia schist formation from the early Toarcian period (183.0 to 175.6  mya ) is mainly made up of posidonia schist.

The term “posidonia slate ” is a bit misleading because the rock is not slate in the petrographic sense . The apparent foliation is a very finely laminated layering of the sediment. The other part of the name of the rock goes back to a species of mussel from the Posidoniidae family that occurs frequently in it and was called Posidonia bronni at the time the rock was named . Later it was summarized (synonymized) with another species and assigned to a different genus and therefore bears the name Bositra buchii today . The genus name Posidonia is now only used for posidoniids from much older layers of the carboniferous . Therefore, rocks of this age that look similar are also called Posidonia schist .

About 175 million years ago in the Mesozoic Era , more precisely in the Lias Epsilon of the Lower Jurassic (also called the "Black Jura" after the oil shale), the Jurassic Sea (also called the Lias Sea or Posidonia Shale Sea ), a tributary sea of ​​the , extended over a wide area great Tethys . It originated in the Toarcian when America (including Greenland, Laurentia ) separated from Europe ( Baltica ) and Africa from the former supercontinent Pangea (probably from around 183 million years ago), because these movements sank areas of Central and Western Europe and sank Shallow water cover. This shallow Jura Sea with several islands - the European archipelago  - was initially brackish . The climate was characterized by summer monsoons and winter drought due to trade winds , which caused strong seasonal fluctuations in the oxygen content in seawater. Therefore, dead tissue decomposed very slowly. The dead animals were soon covered and preserved by the clays and limestone that were washed in. The mud solidified over the course of millions of years. The change of seasons in the Jurassic Sea turned into a petrified sequence of layers. The Posidonia slate is underlain by the older Lias slate of the Pliensbachian (189.6–183.0 mya) and overlaid by the younger Dogger slate of the Middle Jurassic ("Brown Jura", from 175.6 mya). These two adjacent sedimentation phases ( facies ) show significantly less fine stratification ( varves ).

The four main occurrences of the related rock types coincide with the four old shelf basins of the Jurassic Sea, the Paris Basin , the South German Basin , the North German Basin (Lower Saxony Basin) and the Yorkshire Basin . The southern German occurrence is the most open because this basin, unlike the others, was raised by the unfolding of the Alps , and today forms the south-west German layered plain. In the Hilsmulde in Lower Saxony, the Posidonia slate is 6 km deep. In addition, the deposits in York and Yorkshire in the outer northwest of the Jurassic Sea are worth mentioning, which were raised with the British Isles . The European archipelago still builds up part of the low mountain range of this area. The Posidonia schist is the oil parent rock of some of the French and Lower Saxony oil deposits.

The rock is known for its outstanding fossil conservation. Due to the oxygen-poor and sometimes anoxic , so-called euxinic , environment at the time of deposition, sea ​​lilies , ammonites , fish and ichtyosaurs are very well preserved .

The most famous sites are in the area around Holzmaden . The Urwelt-Museum Hauff in Holzmaden shows exhibits on 1000 m².

Posidonia slate is known for the very good preservation of skeletons. The ichthyosaurs have been preserved most spectacularly . In the genus Stenopterygius you can see them most. The taxidermist Bernhard Hauff was able to show that ichthyosaurs had a dorsal fin and that their caudal fin had an upper lobe. Both parts of the body were not supported by skeletal material, so they are usually not preserved. In Stenopterygius stomach contents were found that could not be digested well. Also noteworthy are the numerous females that were fossilized during the birth process or with embryos in the abdomen. This proves that the Posidonia slate was a place to give birth to their young. Hauff (1921) registered over 350 animals.

Plesiosaurs are much rarer. Only 13 complete skeletons were found, including the long-necked Plesiosaurus and the short-necked Pliosaurs Peloneustes and Rhomaleosaurus .
Crocodiles ( teleosaurs ) were also rare, but more numerous than the plesiosaurs - Hauff (1921) listed 70 specimens. The most common is Steneosaurus ; it had a long, narrow snout with many teeth and caught fish , much like today's gavials . The eyes were turned up and out. The much smaller Pelagosaurus had eyes on the side of the skull. The armored platysuchus is very rare, only 4 specimens are known.

The pterosaurs Dorygnathus and Campylognathoides . There are complete skeletons of both, Hauff (1921) listed ten. The only dinosaur fossil is a tibia of the sauropod Ohmdenosaurus .

Holostei (bone organoids) are represented by the genera Lepidotes , Dapedium and Caturus . Leptolepis belongs to the Teleostei . Sharks are mainly represented by Hybodus and Palaeospinax . The largest fish were the sturgeon , including Chondrosteus , he was up to 3 meters long. The coelacanth Trachymetopon was also found . 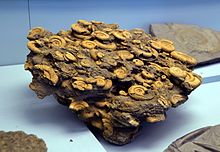 Ammonites are very common, including the species Harpoceras , Hildoceras and Dactylioceras . The most spectacular are squids (like Phragmoteuthis ) and belemnites (like Passaloteuthis ), in which the soft tissues have been preserved.

The 18 × 6 meter specimen from a Seirocrinus colony

Of the plants are horsetails and seed plants ( gymnosperm ) - Ginkgo plants , conifers and cycads - handed.

The most common trace fossils are chondrites and fucoides .

The fauna and flora have been thoroughly documented and illustrated by Hauff and Hauff (1981).

The so-called wild slate of the lower soil horizons begins below the topsoil . It is relatively heavily weathered and is therefore available in individual plates and platelets. The deeper you dig, the less weathered the rock is. The use of Posidonia slate obtained in the quarry depends on its calcium carbonate or carbon content.

Layers with a relatively high calcium carbonate and complementary low carbon content, so-called fleins , are processed under the trade name Holzmadener Ölschiefer or Jura Ölschiefer to table, cover plates, wall and chimney cladding, stairs and floor plates, etc. For this purpose, the roughly cut material in the quarry is sawed, planed and split several times by hand in the slate mill.

Rock made of layers with a low calcium carbonate and high carbon content is combustible and “sweats” out “shale oil” when heated with a burner. Ichthyol , a medicinal ingredient in skin ointments, can be extracted from this oil shale .

Towards the end of the Second World War , efforts were made within the framework of the Desert company to synthesize fuel for the German war machine from the Posidonia slate in the Balingen area . Ten experimental facilities were built, and seven labor concentration camps. It is estimated that a total of around 3,500 prisoners died in this undertaking. Today several memorials, z. As the commemorative Frydek forest , to this inglorious episode of the use of the Swabian oil shale.

In Dotternhausen , the Posidonia slate is used in a cement works both as an energy source for burning the cement and the ground and burned out oil shale is used as an aggregate for the cement.