Vrilissia ( Greek Βριλήσσια ( n. Pl. )) Is a northeastern suburb of the Greek capital Athens with the status of an independent municipality. As a city with a high proportion of green spaces, many cycle paths and a relatively high level of education, Vrilissia is one of the upscale residential areas on the edge of the metropolis.

Vrilissia is located in the center of Attica on the northeastern edge of the Athens basin on the southern foothills of Mount Pendeli . The traditional name of the area, Patima (Πάτημα), appears in some place names. In the north, two hills mark the end of the Athens basin, the western one, today mostly Lofos Vrilission, formerly also Koufo with a summit height of 386 meters, is located entirely in the municipality. The eastern hill (517 m) and the area south between them are now known as Koufos . A large part of the area was owned by Sophie de Marbois-Lebrun , Duchess of Piacenza (French: Plaisance, Greek: Plakendia ) in the 19th century , which is why the area north of the hills was named after her. The district belonging to Chalandri at the rapid transit station named after the Duchess is also called Plakendia today.

The historic center of the municipality, rising to the northeast, is at an altitude of 233 meters. To the west and north of the river Polydrosos or Rema Chalandriou and in the east the largely rotten upper reaches of the Podoniftis, which is called Vrilissos and is a tributary of the Kifisos , form natural borders . The northern slope of the Vrilissia hill is covered by pine forest, which is maintained by the community as Dasos Agios Theoklitos .

Vrilissia is about 10.5 kilometers northeast of Athens, 6 km northwest of Pallini and 4.5 km southwest of Kifisia . It borders Marousi to the west , Pendeli to the north and Chalandri to the south . In the east there is a strip less than a kilometer wide that belongs to Chalandri and separates Vrilissia from the municipality of Gerakas further east.

Vrilissia is officially divided into five urban planning units, which are designated by numbers. Three parts of the city are named after the patronage of the three parish churches Analipsi ('Assumption'), Agii Apostoli ('Holy Apostles') and Metamorfosi ('Transfiguration of the Lord'), the latter being in the areas of Ano Patima and the still little built-up Krassas in the northeast Splits. The area to the west of Pendeli Boulevard, which is bordered by Polydrosos, is called Pararematia zoni ('zone by the stream'), Pararematios or Rematia . Agii Apostoli and Metamorfosi are also summarized under the term Ano Vrilissia ('Upper Vrilissia'). The neighboring district of Patima of the municipality of Chalandri in the east up to Iraklitos Boulevard with the district of Plakendia is considered part of Vrilissia in urban planning. 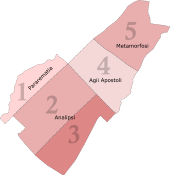 The population figures are based on calculations made by the municipality on the basis of water bills.

The historic center of the city rests on lacustric deposits of Terra Rossa with insets of conglomerate , sandstone and silt with thin layers of marl . The areas along the streams are covered with coarse fluvial-lacustrian breccias with insets of red clay and marl. The higher areas in the north of the municipality rest on mica schist ( muscovite , chlorite , albite , quartz and coal ). In Ano Patima there is also the gray Pentelic marble  , which was also quarried earlier. Lime was also extracted from Koufo Hill .

In Vrilissia there is a typical Mediterranean climate with dry, sometimes very hot summers and mild, rainy winters, with an average of 400 mm of precipitation being very low. The slightly higher location on the northeastern edge of the Athens Basin and the proximity to the Pendeli tend to have a slightly better microclimate than in the center of the city, for example it cools down much faster and more strongly in the afternoon in summer than in Athens.

The name Brilēssos ( Greek  Βριλησσός ) appears in Thucydides as a name for the Pendeli and seems to have been its older name before the mountain was called Pentelikon oros with the adjective to the ancient demos Pentelē .

The area of ​​Vrilissia was in ancient times on two important transport routes. The marble from the Pendeli quarries was transported to Athens along the Polydromos stream; the stream was also one of Athens 'most important suppliers of drinking water and was caught in the Theseus' aqueduct , which ended in a reservoir on the Lykabettos in what is now Kolonaki . This line was in the 2nd century BC. Connected to Hadrian's aqueduct .

During the time of the Duchy of Athens , the area appears as a pine forest on maps. In the Middle Ages, the Pendeli Monastery was built a few kilometers northeast of the modern municipality , which acquired the surrounding area and began to use it as pastureland. The area was grazed by herds of goats from the monastery, tended by the Sarakatsan shepherds who spent the winters on the eastern edge of the Pendeli. In addition, the area from Chalandri was used for agriculture.

In 1925, the rural community Chalandri was spun off from Athens, to which the area Vrilissias belonged. To create residential property as compensation for dispossessed refugees from Turkey, the landowners were expropriated in 1930 and, according to the plans of the German-Polish town planners Kourlianski and Doglopoulov, a settlement based on the Hippodamian scheme was laid out in two sections with plots between 450 and 1,800 square meters in size. Each settler received two pieces of land with the same number, a smaller one for building a house and a larger one for agricultural use. In 1935 the 67-hectare settlement was added to the city map, and in 1940 it was officially recognized as a settlement in the municipality of Chalandri. In 1949 this settlement received the status of an independent rural community with initially 825 inhabitants (1951).

The area of ​​the municipality was enlarged by court decisions in 1950 and 1960 to 3.876 km², which corresponds to today's municipality area. In the following decades the city grew in several planning phases to its present size. Marble workers from the Cyclades settled in the north of the municipality because of the proximity to the Pendeli quarries.

In the 1970s, Vrilissia was spared the building boom in the surrounding communities and remained - also in terms of traffic - a peripheral area of ​​the metropolis. Until the early 1980s, its center was dominated by country and single-family houses. In 1986 Ano Vrilissia and in 1999 the area north of the center was included in the development plan. The farms and fodder farms became fewer, with many small landowners selling their properties, which had suddenly increased in value, as building land. The community grew together with the greater Athens area and became a target of immigration from the centers of Piraeus and Athens. At the beginning of 2000, the development of these residential areas was completed, and the less central areas began to attract mainly high-income newcomers to Vrilissia. Numerous long-term construction projects as part of the 2004 Olympic Games brought Vrilissia, above all, far better transport links. During the implementation of the Kallikratis program in 2010 and the formation of the Athens North Regional District, the municipality remained unchanged.

Vrilissia is one of the richer suburbs of Athens. The level of education of the residents is generally higher than the average in the former prefecture of Athens. In 2001, 41.16% of the population had a higher degree (higher education entrance qualification, average in Athens: 25.28%). The gainful employment in the manufacturing industry is reduced in favor of the service sector, the percentage of the agriculturally used area compared to the residential area is very small. The lack of industrial sites leads to a significant proportion of people commuting to neighboring communities.

According to the 2001 census, there were 1244 foreigners in Vrilissia, which is 4.68% of the population. The largest proportion of them are residents of Albanian origin (28.3%).

In the 2014 municipal elections, Xenos Maniatogiannis won a majority for the Vrilissia Dimos Dimourgias list, which is closely related to PASOK , and was thus elected mayor for the 2015-2019 electoral period. In doing so, he replaced the supremacy of the Nea Pnoi gia ta Vrilissia list, which had been in power since 2003 , and which is close to the conservative Nea Dimokratia and most recently appointed Kostas Ioannidis as mayor.

Vrilissia has had a partnership with the Saarland city of Ottweiler since 1998 .

The municipal open-air theater Theatro Damari Vrilission "Aliki Vougiouklaki" (Θέατρο Νταμάρι Βριλησσίων "Αλίκη Βουγιουκλάκη") is located on the Vrilissia hill near a former quarry and has been visited by numerous groups in the late summer since 1990.

In one of the primary schools in Vrilissia a small museum has been set up about the life and learning of the pupils in the post-war period.

The sights of Vrilissia include a historic water tower on Platia Agia Lavra and a boulder (Vrachos toi Vrilissou) on Platia Eleftherias.

The central church, dedicated to Ascension Day, was built in the 1970s through donations from residents. The Transfiguration Church in Ano Patima was completed in 2008, followed a few years later by the Church of the Twelve Apostles in Ano Vrilissia.

In addition to the urban pine forest in the north of the municipality, there are numerous parks and green spaces in Vrilissia. The Platia Eleftherias is located near the old center of the city , the largest park is located on a former site of the Greek Navy and was named after Maria Callas . There is a small pond and area for skaters . The spacious Mikis Theodorakis Park extends around the Nikos Engolopoulos cultural center. The banks of the Polydromos on the western city limits are also relatively green.

Vrilissia has had its own sports field only since the 1990s, especially since the Chalandris municipal sports field is located on the southern border of the Vrilissia area. In 2007 the private family club was built. Numerous sports clubs are active in the community, of which the basket, volleyball and handball teams in particular were able to achieve national success. The women's volleyball team was Greek champion five times .

The parish around the main church celebrates a big street festival every year on Ascension Day.

In Vrilissia there is the Athens Psychiatric Clinic, which was founded in 1971 and has 300 beds.

Vrilissia has six kindergartens and six elementary schools, three middle schools and two high schools. There are also the bilingual Greek-German primary school Athens School and the private school Ekpedeftiria Kanda. There has been a state music conservatory since 1976.

There are three cultural centers in the municipality. The oldest is on the Odos Kissavou in Ano Vrilissia. The Niarchos Foundation financed a religious cultural center behind the central church on the Platia Analipseos. The youngest building, the Nikos Engonopoulos cultural center in Mikis Theodorakis Park, was built during its renovation. Its offer includes various artistic courses, including theater, painting, sculpture, choir and puppet theater, which can be attended free of charge.

The south-east of Vrilissia borders directly on the Doukissis Plakendias station, an important traffic junction at which several road and rail routes intersect: the southern municipal border runs along the Greek A 6 , the Athens northern bypass and connection to the Athens airport , which is around 25 kilometers away here the A 642 branches off, which connects it with the Ymittos-Ring , the Athens' Osttangente. At the corresponding exit, Doukissi-Plakendia-Boulevard crosses the main road connection to Chalandri and on to the center of Athens. The boulevard of the same name runs close to the western Pendeli motorway exit and continues northeast to Pendeli.

The Athens Airport – Kiato S-Bahn line runs parallel to the motorway , at the station it meets line 3 of the Athens Metro , which connects the center of the capital with the airport. Several bus routes between Chalandri and Pendeli serve the rest of the municipality.