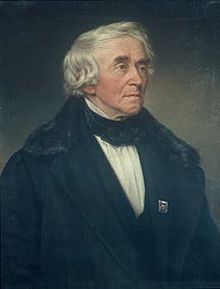 Friedrich Wilhelm von Thiersch (born June 17, 1784 in Kirchscheidungen near Freyburg as Friedrich Wilhelm Thiersch ; † February 25, 1860 in Munich ) was a German philologist , also known as the "Praeceptor Bavariae" (teacher of Bavaria ) and the "father of humanistic education “Was designated in Bavaria, similar to Wilhelm von Humboldt in Prussia .

Thiersch was born as the second son of farmer Benjamin Thiersch in the Thuringian village of Kirchscheidungen an der Unstrut. He studied in Leipzig and Göttingen from 1804 and became a private lecturer there in 1808 . In 1809 he came to the Munich Wilhelmsgymnasium as a professor and in 1811 to the Lyceum .

Soon after his arrival in Munich, Thiersch got into an argument with his superiors at the grammar school and with the circles surrounding Baron Johann Christoph von Aretin . On the one hand, there was a conflict between the Protestant North and the Catholic South; On the other hand, there was disagreement as to whether one should continue to work with Napoleon's France , which Aretin particularly advocated, and whether one should abandon Enlightenment educational policy in order to turn to a new humanist education system. When an assassination attempt was made on Thiersch on Shrove Monday 1811, Thiersch put the blame on his opponents around Baron Aretin; in fact, a love affair was the reason for the attack.

In 1812 Friedrich Thiersch founded the Philological Institute connected to the Bavarian Academy of Sciences . From 1811 to 1829 he published the four-volume Acta philologorum Monacensium , the forum of the Philological Institute. After Ludwig I ascended the throne in 1825, Thiersch was commissioned to reorganize the higher education system. In the curriculum he wrote in 1829, teaching at grammar schools was almost entirely reduced to learning the ancient languages . This came close to the ideas of the king, who wanted to fuse his dynastic patriotism with a classicist ethos (see Walhalla ). In 1835 Thiersch was elected a foreign member of the Göttingen Academy of Sciences . From 1848 to 1859 he was President of the Bavarian Academy of Sciences . In 1855 he was elected to the American Academy of Arts and Sciences .

Thiersch was among others