This article deals with woods from the ebony family; "Moçambique ebony" see under Grenadilla . 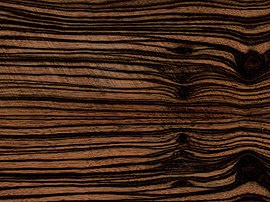 Ebony is one of the non-European hardwoods and describes a black (or black-striped) wood from various trees of the genus Diospyros from the ebony family . The heartwood (without visible annual rings ) is very hard, heavy and is one of the most valuable types of wood. The mostly yellow-gray sapwood , which is usually removed immediately at the felling site by cooling off, can make up up to 70 percent of the trunk and is considered worthless and unattractive. The density of ebony depends heavily on the variety and is in the range from 0.9 to 1.3 kg / dm³. Its grinding dust can irritate the skin, eyes and lungs. 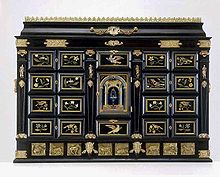 Cabinet made of ebony with colored inlays (18th century)

Ebony is mainly used for inlays and veneers as well as for musical instruments (woodwind instruments, fingerboards, keyboards, pegs, etc.), for carvings and artistic turning. In historicism it was a popular wood for door and window handles as well as cutlery handles. Cuttings are used for the production of knitting and crochet needles or for the handles of knives.

While today the black heartwood of the tree genus Diospyros, which is native to India and Sri Lanka , is denoted by ebony , is Biblical with Hebrew. הָבְנִים (håvnîm) means a comparable wood that was exported from Nubia. Investigations of the dark wood found in Egyptian graves (Egyptian hbny = ebony; cf. English ebony) identified it as the wood of African grenadilla ( Dalbergia melanoxylon ) from the legume family. This tree species grows in the arid areas on the southern edge of the Sahara.

Ebony is mentioned in the Old Testament ( Ezek 27.15 EU ) as a Tyrian trade good  that was imported from the port city of Dedan ( LXX reads Rhodes, also the Luther translation) in southern Arabia.

In mythology , sorcery and esotericism , ebony is often ascribed a magical effect. For example, houses with wooden stakes should not be entered by evil spirits, and weapons made of ebony should be able to wound demons. Also wands are often made from ebony, as magic items should be stored in boxes made of ebony, to retain their power. The most popular mention of ebony in the world of sagas and fairy tales is certainly the story of Snow White , whose hair was as black as ebony.

The beauty of the wood of this plant made it widely known and popular. But the great demand for this tropical wood led to the species being included in the IUCN Red List of Endangered Species in 1994 .