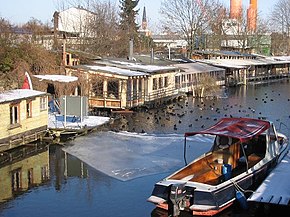 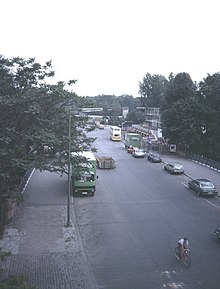 The elongated approximately 6.5 hectares comprehensive Lohmühleninsel lies at the east exit of the Landwehr Canal to the River Spree opposite the Osthafen in Berlin district of Kreuzberg .

In addition to the Oberschleuse, the island offers listed buildings such as the last remaining customs house or the first Berlin gas station with a service area. Three of the four island bridges are also listed . The Lohmühleninsel is also interesting as a former inner-German border area. The larger southern part is now used as a sports and leisure park.

The island, around 600 meters long and 100 meters wide, was created with the Landwehr Canal in the years 1845 to 1850. Its boundary is formed by the canal to the west and the flood ditch to the east , which branches off from the Landwehr Canal at the level of today's Görlitzer Park and parallel to the canal in the Spree flows. In the former sheep or Floßgraben still in 1803 three were Bark Mill , the oak and spruce bark ( tan ) to Borken flour, an additive for leather production , processed. The island's name was given to the island's name because of the un-preserved tale mills from around 1750.

The flood ditch forms the border between the districts of Kreuzberg and Alt-Treptow and was thus part of the inner-German border between West and East Berlin during the division of Germany . One of the last preserved and publicly accessible wall towers of the GDR border troops is located on the east side in the Park Schlesischer Busch .

About half a kilometer northwest of the island was the city's exit gate towards the province of Silesia , the Schlesisches Tor (previously Wendish Gate ) in the Berlin customs wall or excise wall , which replaced the Berlin city wall in the 18th century . When the city grew beyond this excise wall, the collection of taxes in the 19th century was shifted to excise houses built well in front of the gates. The wheelhouse of the Royal Water Inspectorate for the collection of flour and slaughter taxes , which Gustav Möller built in 1859 on Lohmühleninsel (in front of Schlesisches Tor 3), is the only one of these excise houses to have survived. The listed brick building now houses the “Chalet” club and serves as a residential building. The neighboring Treptower petrol station with the coffee house "Zur Pump" (since autumn 2004 under the name "Anhalt") is also under protection as the oldest still preserved petrol station in Berlin, which was also the first petrol station in the city to have an attached service area. The building was built between 1928 and 1929 according to plans by the architects Paul Schröder and Max Pohl.

The short stretch of road in front of the Schlesisches Tor , which is located between the two listed island bridges Schlesische Brücke (Canal) from 1894/1896 and Obere Freiarchenbrücke (Flutgraben) from 1893/1896, connects the districts of Kreuzberg and Treptow with the roads leading to it Schlesische Straße or Puschkinallee connects. The Obere Freiarchenbrücke was named after the small sluice that balances the level between the Flutgraben and Spree at a height of 20 cm - arche comes from Latin roughly meaning ship-like boxes and was also used for sluice in old German .

At the southern end of Lohmühleninsel, the Ernst-Heilmann-Steg from 1980 on Kreuzberger and the historic Treptower Bridge on the Treptower side offer pedestrians and cyclists further access to the island. The name of the footbridge keeps alive the memory of the social democratic politician Ernst Heilmann , who was murdered with lethal injection in 1940 in the Buchenwald concentration camp .

A total of four bridges lead to the Lohmühleninsel, while the Lohmühlenbrücke from 1920/21 spanned the Neukölln shipping canal a good kilometer south just before its confluence with the Landwehr canal. The bridge connects the Alt-Treptower Lohmühlenplatz at the end of Lohmühlenstraße with the Neukölln Maybachufer . The historical industrial complex Lohmühlenstraße / Kiefholzstraße was reconstructed after 1990 and is under protection as an industrial monument . 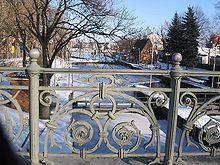 North end of Lohmühleninsel (right) at the Oberschleuse, view from the Schlesische Brücke with the Spree in the background

In the island part north of the road in front of the Schlesisches Tor there are commercial areas and the upper lock, one of the two locks of the Landwehr Canal. The Flatow Sports Hall , which bears the name of the gymnast Alfred Flatow and his cousin Gustav Felix Flatow , borders the street to the south . A plaque commemorates the athletes and the victories they achieved at the 1st Summer Olympic Games in Athens in 1896 . The founding member of the Jewish Gymnastics Association in Germany, Alfred Flatow, died in 1942 in the Theresienstadt concentration camp ; Gustav Felix Flatow died at the same place in January 1945.

The sports hall for almost 200 spectators with a three-part barrel roof was built between 1986 and 1988 based on a design by architects Stephan and Thomas Dietrich. The building is adjacent to the Lohmühleninsel sports park , which has a playing field with artificial turf and various training options for athletes as well as a tennis facility. In addition to the KSF Umutspor e. V. , the youth department of Türkiyemspor Berlin uses the field as a training and occasionally as a venue. In addition, the Berlin gymnastics club 1850 has its headquarters here. The facility is also used for school and company sports . A small park-like part with public paths and a playground forms the southern end of Lohmühleninsel.

Explanations of the historical map from 1902 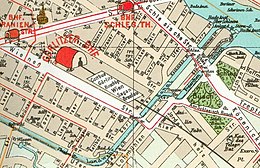 Map from 1902. Explanations in the adjacent chapter

In the adjacent section of the Pharus plan for Berlin from 1902, today's flood ditch is still called the Freiarchengraben . The Ernst-Heilmann-Steg opposite the Treptower Bridge did not exist at that time, it was only built in 1980. The entire area of ​​the marked Görlitzer Bahnhof , which was finally demolished in 1976, up to the Landwehr Canal today forms the Görlitzer Park . The Osthafen opposite Lohmühleninsel on the banks of the Stralau Spree is also missing on the map, as it did not go into operation until 1913. At the turn of the century, various swimming and rowing clubs used this bank, the bathing establishments shown no longer exist today. Furthermore, the Neukölln shipping canal , which was just excavated in 1902, is missing on the map . It branched off in the lower arch of the Landwehr Canal and, among other things, divided the Neukölln Maybachufer, which, in contrast to today, extends far into Alt-Treptow .

There are a growing number of clubs on the island. Many residents of Lohmühleninsel complain about the noise from these clubs along the canal between Treptow and Kreuzberg. Various measures are being taken (setting up a round table, a complaint hotline and naming night watchmen) to try to counteract this.