The American Sign Language (often with ASL is abbreviated) is the dominant sign language in the United States and Canada . Dialects and related sign languages ​​are spoken in the Caribbean islands and Guatemala , in Southeast Asia in the Philippines and in Singapore and Hong Kong, and in Nigeria , Ghana and other countries in Africa . 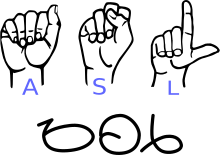 The name American Sign Language (ASL) was chosen in 1960 by the American linguist William Stokoe of Gallaudet University when he analyzed the manual language of deaf students. As the first linguist he discovered that, contrary to the prevailing opinion of educators, this language has all the properties of a language. He demonstrated that language is also made up of a finite number of elements, comparable to the phonemes of spoken languages , and structured on word and sentence levels.

As with any sign language , ASL differs from the surrounding English in terms of grammar, word and sentence formation and semantics . ASL has its origins in the old French Sign Language (LSF) and the sign language of the inhabitants of Martha's Vineyard and partly in the sign languages ​​of the North American Indians . The language originated only in the first American school for deaf children in Hartford, Connecticut ( American School for the Deaf ), in 1817 by Thomas Hopkins Gallaudet and the deaf Frenchman Laurent Clerc was founded.

ASL is gaining more and more importance in international academic encounters as more and more deaf academics from countries with different sign languages ​​study in the USA and use them in these encounters. However, the ASL is not considered a lingua franca , especially in Europe .

The ASL vocabulary is also taught to chimpanzees , bonobos and gorillas . Some acquired a vocabulary of over 1,000 words.

Prior to the advent of American Sign Language, various other sign languages ​​were used by the hearing impaired in the United States. Very often parents and deaf children created their own sign language at home in order to communicate with each other, which was then also used in their environment. Two historical sign languages ​​existed in North America before ASL: Plains Indian Sign Language (spoken by Native Americans) and Martha's Vineyard Sign Language , but both are now extinct.