A TV-SAT or TDF satellite on a postage stamp of the Deutsche Bundespost from 1986 . The illumination zones are indicated.

TV-SAT 1 and TV-SAT 2 (orbital position 19 ° West) were two satellites that had been developed for direct television reception in Germany. Like the TDF satellites and the Swedish Tele-X , the satellites were based on the Spacebus 300 satellite bus from Aérospatiale , which they built in cooperation with MBB . Its huge solar cells generated three kilowatts of electrical power - a very high value for the time - and the transmission power was 230 watts per transponder . For comparison: the Astra 1A satellite, launched in 1988 and built by RCA Astro Electronics (now Lockheed Martin), had a transponder power of just 45 watts. Like the other Spacebus 300 satellites, the TV-SAT satellites were designed for a service life of eight to ten years.

In an effort to use a geostationary position discovered by Herman Potočnik and published as early as 1928 for direct television reception in Europe , the World Administrative Radio Conference (WARC) in Geneva in 1977 decided on a worldwide radio satellite plan . From January 1, 1979, an agreement with a term of 15 years was in effect, which provided that each country could broadcast five TV or more radio programs directly from the satellite to the subscriber. Each country had to share the position with up to eight other countries (and thus satellites). For each geostationary position, 40 transponders at 27 MHz with a transponder spacing due to frequency overlap of 19.18 MHz were envisaged. The Direct Broadcasting Satellites (DBS) should be positioned at an altitude of 36,000 km with a distance of 6 ° (approx. 4415 km) above the equator. A common position 19 ° West was assigned to Belgium, the Federal Republic of Germany, France, the Netherlands, Italy, Luxembourg, Austria and Switzerland. These satellites should be developed and mass-produced in Europe. The Spacebus-300 - satellite bus , Aérospatiale in cooperation with Messerschmitt-Bolkow-Blohm developed should be the start of a European satellite broadcasting future, which ultimately was not until later due to the failure of the satellite TV platform.

The Federal Republic of Germany and France decided on October 2, 1979 in Bonn a framework agreement on the construction of two direct television satellites , which broadcast in the BSS band to WARC SAT-77 and were to be launched in 1983. In 1981, a consortium of German and French companies, the Eurosatellite company , began building the satellites TV-Sat 1 for the Federal Republic and TDF-1 for France with an order volume of 520 million DM. a. If the German minister-presidents of the federal states established that only the federal states are considered constitutional carriers of broadcasting sovereignty when using satellites for broadcasting purposes, and, among other things, the demand for a limitation of a TV satellite footprint to the respective state area, the project was always delayed again. The technical parameters, above all the transmission power and number of programs required for direct satellite reception, ultimately corresponded to the technical status of 1978 when TV satellite was launched in autumn 1987.

In the middle of 1980 the industry expected an early breakthrough of satellite television on the mass market through compact TV satellite reception systems - a success of the competitor Astra was not foreseeable - so the Kathrein company in 1987 had its advertising slogan "Television has got wings." KATHREIN-SatAn “legally protect. In August 1987, before the start of TV-Sat 1, the industry presented the new television transmission standard D2- MAC at the international radio exhibition in Berlin . The transmission was apparently digital for picture and sound from a telecommunications satellite at 19 ° West. (However, only the sound transmission with D2-MAC is digital. The image transmission is analog, but avoids Cross Color and Cross Luminance by time-multiplexed transmission of the brightness and color information, as is the case with PAL through the parallel transmission.) Later, HD-MAC should be used for high-resolution Follow TV.

TV-Sat 1 was launched on November 21, 1987 on an Ariane 2 rocket. One of the solar panels could not be unfolded, for this reason the receiving antenna could not be unfolded. An initial assumption that someone had forgotten to remove the transport locks could quickly be refuted, since all the locks in Kourou were available after the start. After a series of complex tests on the ground and in orbit, the most likely cause of the failure turned out to be that parts of the unfolding mechanism of one of the two solar panels were incorrectly mounted and thus blocked opening. The parts concerned were only installed shortly before the start in Kourou and replaced the transport locks; Simulations have shown that the parts could actually be assembled upside down without any problems.

The satellite was therefore unusable, was switched off at the end of 1989 and put into cemetery orbit. However, technical experiments on the TV Sat 1, which was unusable, showed that its 10-N position control nozzles had a hot-start problem; Helium in the fuel lines could destroy the nozzles when ignited. The knowledge gained from this was valuable for the Galileo spacecraft , which was supposed to use the same nozzles. The nozzle type was then redesigned for Galileo.

TV-Sat 2 entered geotransfer orbit on August 8, 1989 together with the Hipparcos astronomy satellite with an Ariane 44LP rocket , was then positioned in geostationary orbit at 19 ° West and worked technically flawlessly.

TV-Sat 2 had a launch mass of 2145 kg and was also launched on August 8, 1989 by means of an Ariane rocket, it broadcast four television channels ( Eins Plus , 3sat , RTL plus , Sat.1 ) and the DSR radio package on a transponder . He used the area of ​​the Ku band intended for broadcast satellites and known as broadcasting satellite service , with a circular polarization (right circular and left circular) that was new in satellite reception at the time. The D2-MAC standard developed for satellite broadcasts was used for television programs. The high transmission power of 230 watts made it possible to receive television programs with satellite dishes only 45 cm in diameter (even behind window panes). TV-Sat was considered very modern in its time. However, twice a year he got into the earth's shadow at night and during that time he could not be received. Economically, it was a failure for the operator Deutsche Bundespost Telekom . The small number of programs that could only be received in the special D2-MAC standard (already with digital sound) could only inspire a small number of viewers. The same was true for the French sister satellites TDF 1 and 2. The task of TV-Sat 2 was therefore largely taken over by the DFS Copernicus satellites, which were much more successful, but were eventually left behind by the market leader Astra. Kopernikus 1 also broadcast the DSR package. The DSR package and the television programs were fed digitally in D2-MAC into the cable television networks of the Deutsche Bundespost.

In 1994 the broadcasts on TV-Sat 2 were ended and the Deutsche Bundespost Telekom sold the satellite to the Norwegian satellite operator Telenor, which operated it from 1995 to 1998 on 1 ° West. In 1998 it was sold by Telenor to Eutelsat and used at 12 ° West until it was decommissioned in 1999. TV-Sat 2 is now in cemetery orbit .

TV-Sat was placed at the orbital position 19 ° West above the Atlantic, which is unfavorable for Central Europe, the elevation was (exemplary) only 27 ° for TV-Sat reception in the city of Salzburg. The competitor Astra was placed at 19.2 ° East over Central Africa and was able to come up with a more favorable elevation of 34.78 ° in Salzburg. Shadows caused by mountains, tall buildings or trees were much more common with TV-Sat than with its competitor Astra. As experience in direct reception satellite operation shows today, satellite systems whose geostationary position is equal to one degree of longitude of the reception target area have established themselves on the market. The competitor Astra came much closer to this at 19.2 ° East. 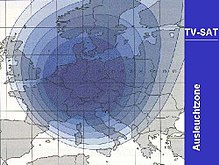 Due to the decision of the European governments to build high-performance satellites (TV-Sat, Tele-X, TDF, Marcopolo etc.) for DTH reception (direct-to-home) and to use MAC as the transmission standard, the European Broadcasting Union (EBU) find a so-called supply criterion for the MAC standards . This provision stipulated that an area with a bit error rate of less than 10 −3 with a signal to noise ratio C / N (Carrier to Noise) of 8 dB in the analog signal and a signal bandwidth of 27 MHz is considered to be covered.

At that time, the supply criterion could only be achieved with reflector sizes of 90 cm in diameter due to the not yet developed internal and external electronics. At that time, this level was also viewed by the EBU and national governments as a reasonable size for the DTH market. With advances in technology, such a minimum signal level would be obsolete today, as a good LNB (≈ 0.8 dB noise figure) with a larger feed horn (without reflector) in the core footprint of the DBS satellites would be sufficient for this supply criterion.

TV-Sat and the French SCART interface

Once it became clear in 1978 that not for satellite TV PAL or SECAM , but for image transfer, the new standard D2-MAC is used, was in the then newly developed SCART interface RGB color information integrated for television transmission. Although the TV-Sat project failed, RGB remained in the SCART connector to this day. It can also be seen as a relic of TV-Sat that the SCART connector RGB is the only one that is unidirectional , unlike all other cables - at that time it was never planned that a TV should have sent its picture back to TV-Sat .