The first electronic component of a satellite receiving system located in the focus of a parabolic antenna or in the signal decoupling of a panel antenna is referred to as the low-noise signal converter (from the English Low Noise Block , LNB for short ; and Low Noise Converter , LNC for short ) .

It converts the satellite frequency from, for example, 10.7-11.75 or 11.8-12.75  GHz to the 950-2150 MHz range  , thereby enabling cable transmission through a coaxial cable and, more recently, also with fiber optics and reception with a satellite receiver . A "digitally suitable" universal LNB does not have to process digital signals, but only has to be able to convert the full frequency range from 10.7 to 12.75 GHz. Initially, DVB signals were only sent in the upper range from 11.7 GHz, but in view of the analog TV switch-off, almost all transponders from 10.7 GHz upwards are now occupied with digital TV signals.

An LNB consists of the combination of a low-noise amplifier ( LNA ) with a block converter (see below). If a feed horn (from the English feed horn for " feed horn ") is attached, it is also referred to as LNBF ( Low Noise Block Feed ) or LNF ( Low Noise Feed ).

After the high-frequency microwaves of a geostationary telecommunications satellite have been bundled by a parabolic mirror or a panel antenna , the LNB fulfills the following additional tasks for satellite reception: 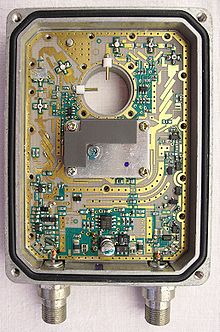 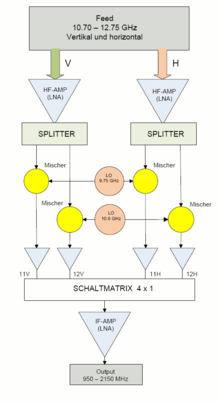 Block diagram of a universal LNB

The LNB is supplied with power via remote feed via the antenna cable. The Marconi standard, which has been established since the late 1980s, enables the level of polarization to be selected via the level of the supply voltage (14 volts vertical, 18 volts horizontal). The switching threshold is 15 V and allows voltage drops on up to 3 diodes in upstream DiSEqC switches and in the supply cable itself. With the universal LNB (10.7–12.75 GHz), a superimposed permanent switching frequency (22 kHz ± 20% ) Alternatively, the later added high band from 11.7 GHz can be selected. In order to be able to serve more than two switching criteria, the digital control bus DiSEqC - later with return channel - was developed jointly by the satellite operator Eutelsat and the Philips company in the early 1990s . With a modulated 22 kHz frequency, this enables the control of up to 256 different components of a satellite receiving system. DiSEqC components can work with a reduced operating voltage of 12 volts in order to reduce power loss.

The entire functional unit is usually integrated in a common weatherproof housing - in the case of panel antennas, in this. In addition to protection against moisture, dust and temperature influences, it must ensure that in the area of ​​the wave entry window, as far as possible, no impurities or water (possibly also as snow or ice) can adhere to the outside. The neck has a diameter of 40 mm (in the commonly received Ku-band), with which the LNB is attached to a clamp (feed holder) of the parabolic antenna. For multi-feed systems there are LNBs with a 23 mm neck diameter.

If you look at the transmission lobe of a satellite , i.e. its coverage zone on the earth's surface ( called footprint ), it becomes understandable that the signal power density on the ground can only be low. Highly bundling antennas ( parabolic mirrors , panel antennas ) are used so that the useful signal stands out from the thermal background noise of the cosmic background radiation in relation to the entire baseband . If they are correctly aligned on the geostationary satellite, they transmit a sufficient amount of useful signal and only little interference into the “feed” of the LNB. At too low signal to noise ratio (SNR, English signal-to-noise ratio given) to which it further by a too small or misaligned antenna, by attenuation of the signal (snow, rain), or by injecting noise sources (reflections ) can occur is no more reception possible.

Since the noise power of the thermal noise depends on the baseband bandwidth, this becomes all the more problematic the larger the frequency range used.

A universal LNB switches between two different frequency ranges in order to cover the entire reception range from 10.7-12.75 GHz, as the frequency bandwidth between the upper and lower limit frequency (2.05 GHz) does not fall into the reception range of the satellite receiver of 950– 2150 MHz fits.

Since every amplifier makes noise and adds this inherent noise to the signal, the SNR in a signal chain can never get better, it can only get worse. An LNB therefore requires a particularly low-noise amplifier in the entire baseband in order to still be able to receive reception even in poor reception conditions. Typical of universal LNBs is since 2004 a self-noise (related terms: noise , noise figure , Eng. Noise figure , noise floor ) of about 0.6 dB (0.6 to 0.7 dB at 21 ° C are considered to be very good) . Lower noise figures of 0.2 and 0.3 dB are not possible in the private sector, since in the first stage of the LNA, according to the manufacturer's data sheets, the amplifier transistor already has a self-noise of approx. 0.3 dB under optimal conditions. This means that the total noise figure can only be higher if several amplifier stages (with low-noise so-called HEMTs ) are connected in series. The reinforcement of the individual levels also plays a decisive role.

When choosing receiver components, weather resistance should also be taken into account. In addition to general air pollution, snow and ice as well as bird droppings (feedhorn receiving side) can also dampen the signal. Occasionally, LNBs are offered with a thin film cover in order to achieve an even lower attenuation value. However, these are very delicate and difficult to clean.

A low self-noise is an important quality feature of this component, but "Low Noise" as part of the name is quite peculiar and can only be explained by historical development.

In the early days of satellite reception (and for special applications still today), the high-frequency signal from the satellite was only amplified and passed to the receiver without conversion to an intermediate frequency. Low noise was particularly important and the corresponding high-frequency amplifiers, which were very complex at the time, were called LNAs ( low-noise amplifiers ). With this construction, only short, low-attenuation cable connections between antenna and receiver are possible.

LNBs that can receive both polarization levels have been used in the private sector since the early 1990s. The additional block refers to the fact that an LNB processes several frequency blocks of different polarization and frequency at once;

LNCs can therefore only be found on old systems and in professional antenna systems and are no longer newly installed in direct reception.

When the components are fully integrated, one sometimes speaks of the LNBF or the LNF . "Feed" means the signal supply.

The various abbreviations are often used synonymously in practice, even by experts.

Only with the advent of the DTH antennas (antennas for direct-to-home reception, where Astra was one of the pioneers) are the feed horns attached directly to the Ku-band LNBs. Previously, the LNBs had a standardized flange that fit onto the counter flange of the feedhorn. This was also necessary because the LNBs did not have a level switch or a low / high band switch in the early years. The level separation was done with so-called orthomodes - for this a separate LNC was necessary for each level - or polarizers. LNBs are often used together in receiving systems with so-called multi - switches .

Differentiation of the LNBs according to the reception area
Until the end of the 1990s, LNBs designed for what is now called the low-band (10.7–11.7 GHz) were common. Since the advent of digital technology, satellite operators have also been using the so-called high band (11.7–12.75 GHz). LNBs, which can convert both frequency ranges directly into the frequency band used by the receiver, have since been referred to as universal LNB . Such a universal LNB is necessary for systems with which (mostly digital) programs are to be received in high band. The designation digitally suitable for the LNB itself is misleading, because every LNB can convert analog and digital signals from both the low-band and the high-band into the corresponding frequencies. It stems from the fact that the older low band mainly contained analog signals, while the later added high band was primarily used for digital programs. In the course of the displacement of analog channels in favor of digital broadcasting technology, the low-band has now also been switched to digital broadcasts. The term digitally suitable for an LNB only means that it can also convert the frequencies / channels of the high band and has nothing to do with any analog or digital electronics in the LNB. LNBs that can only receive the low band have meanwhile been pushed out of the market by the compatible universal LNBs and are no longer used for new installations or repairs. In the course of switching off the analogue satellite supply in Germany, most of these LNBs have been replaced by the universal LNBs at the customer.
Some manufacturers advertise LNBs as HD or 3D compatible. However, an LNB works independently of the video and transmission standard. Since the frequency band has not changed for DVB-S2 (or 3D and HDTV ), every digital LNB works for it. For the vast majority of HDTV channels (exceptions include Tele 5, WDR and Sky), it doesn't even have to be digital.
Wideband LNBs have also been available since 2015. These LNBs each have an outlet for the horizontal and vertical signal. The entire frequency band (10.7–12.75 GHz) is converted to the output frequency range of 300–2350 MHz with an oscillator frequency of 10.40 GHz. Currently these LNBs are mainly used to supply Unicable 2 multiswitches with several satellites. Satellite receivers, on the other hand, are generally unable to receive or can hardly receive more than the intermediate frequencies 950–2,150 MHz.

Differentiation of the LNBs through additional functions

The designs described above relate to the satellite television systems customary in Germany, all of which work in the Ku band . However, there are many other LNBs for other frequency ranges and applications, e.g. B. Meteosat LNBs, L-band LNBs, S-band LNBs, C-band LNBs.