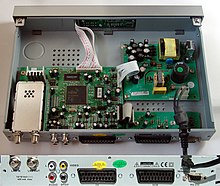 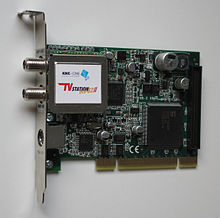 A satellite television receiver (often also satellite receiver , engl. "Receiver" for "receiver") is a device of entertainment electronics, with the television and radio programs by broadcasting satellite via a parabolic antenna can be received. Image and sound signals are forwarded from the satellite receiver to the corresponding output devices (e.g. television ). Compared to terrestrial reception via antenna, considerably more programs can be received. In contrast to reception via cable television , there is no separate connection fee for access to the transmission medium.

A satellite receiver converts the signals received from the Low Noise (Block) Converter (LNB / LNC) (low-noise signal converter) into the frequency range of 950–2150 MHz and then converts them into a video signal that can be played on a television. Usually it also takes over the power supply of the LNB by supplying it with what is known as a remote feed voltage via the receiving cable .

When receiving all frequencies available in a satellite position, the problem arises that four intermediate frequency (IF) bands from 950 to 2150 MHz are available, but only one frequency band can be transmitted to the receiver via a coaxial antenna line.

In the early days of satellite reception, two antenna cables were therefore laid to the receiver in order to receive two polarization levels, so a receiver absolutely required two IF inputs. So-called polarization rotors brought a simplification, using a separately laid control line to the LNB in ​​the LNB feed to select the desired SAT level via a small rotor or an electromagnet; a receiver requires special control outputs for this.

With the advent of inexpensive reception systems in Europe, the industry was looking for more practical solutions for their satellite reception systems, which are now also being sold in hardware stores. Using a so-called Marconi LNB, a change between the two SAT IF levels supplied by the LNB was implemented using different remote feed voltages of 14/18 volts, which in turn made the use of new satellite receivers necessary, which, however, quickly fell in price due to the corresponding quantities. A remote feed voltage of 14 volts corresponded to the reception of the vertical polarization plane, a voltage of 18 volts to the horizontal plane.

A further expansion brought the use of the 11.7-12.75 GHz frequency range, which was formerly only used for telecommunications services and direct broadcasting satellites (DBS) , which meant two additional frequency ranges to be received by the receiver; Switching to these third and fourth reception levels was achieved by superimposing the remote feed voltage with a 22 kHz frequency. A satellite receiver was now able to switch between all four polarization and frequency levels supplied by a satellite using the remote feed control signals (14/18 volts, 22 kHz signal on / off). To switch to other satellites, however, it was still necessary to rotate the entire satellite dish using an elaborate rotating system control ( polar mount ).

In order to enable switching to other satellites without a rotating system, Philips developed the (Digital Satellite Equipment Control) DiSEqC protocol, and the satellite operator Eutelsat developed the specification for an extension of the 22 kHz control signal through pulse modulation, known as the DiSEqC protocol. Philips then sold the rights to Eutelsat.

The DiSEqC protocol is available in versions 1.0, 1.1 and 1.2. Although there should be downward compatibility, DVB-S receivers with DiSEqC 1.2 are seldom compatible with DiSEqC 1.1 and are therefore only suitable for multifeed to a limited extent, they can control a maximum of 4 LNBs, while 1.1 allows up to 64 LNBs. When purchasing the receiver for the use of more than 4 LNBs, it should therefore be ensured that DiSEqC 1.1 is expressly stated in the technical data.

Analog television programs have not been broadcast via satellite since 2012. After a total of 23 years, the analog PAL broadcast on the Astra satellite system ended on April 30, 2012 with the analog switch-off .

An analog receiver could be connected to all types of LNB , including the so-called universal LNB, which receives the entire Ku-band from 10.7 to 12.75 GHz, with transmission above 11.7 GHz mainly digital.

Rupert Murdoch , the Australian-American media entrepreneur, was the first customer of the then still young satellite company SES Astra . As early as 1989 he decided to broadcast his TV programs in the conventional PAL television standard . With this simple, inexpensive and widely available reception technology, he gained rapid growth for himself and the private satellite operator Astra and thus the decisive market advantage.

PAL successfully asserted itself against the partially digital broadcasting standard D2-MAC . D2-MAC was a development of the postal monopoly of public broadcasters and the equipment industry, for direct satellite reception via the TV-SAT satellite. D2-MAC had a limited distribution and a short lifetime.

The frequency lists always contain the five-digit or six-digit downlink frequency (the frequency with which the satellite transmits). In addition there is the polarization and, in the case of digital programs, the symbol rate and the error correction, FEC for short.

The SAT IF is therefore always 250 MHz higher with newer LNBs.

Some pay TV operators do not allow their encryption standard to be sold via conditional access modules , as they fear that the CI interface represents a security gap. For reception they require satellite receivers with a permanently installed decryption module, which means that CI receivers cannot receive such programs despite the common interface.