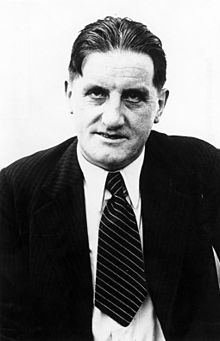 Ernst Franz Sedgwick Hanfstaengl (born February 2, 1887 in Munich ; † November 6, 1975 there ) was a German-American businessman , art dealer , political activist and politician . He was best known as a financial supporter and friend of Hitler in the 1920s, as foreign press chief of the NSDAP in the 1930s and later as a member of a working group under John Franklin Carter that worked for Franklin D. Roosevelt .

Hanfstaengl was born in Munich as the son of the wealthy publisher and art dealer Edgar Hanfstaengl and his wife Katharina Wilhelmina Heine. He got his lifelong nickname "Putzi" from a nanny . After graduating from high school , he moved to the United States, where he studied at Harvard University until 1909 . Among his fellow students at Harvard was the future US President Franklin D. Roosevelt . After studying art in Vienna, Florence and Rome and returning to Germany for a year to do voluntary military service, Hanfstaengl lived in New York City , where he managed the American branch of his parents' company, the Hanfstaengl Art Salon, until 1918. The customers of this business included Henry Ford , Arturo Toscanini and the young Charlie Chaplin .

Since the art salon had been expropriated as "enemy property" by the US authorities towards the end of the First World War , Hanfstaengl returned to Germany in 1919 and settled in Munich. On February 11, 1920 he married Helene Elise Adelheid Niemeyer. In 1921 their son Egon was born. In 1924, their daughter Hertha followed, who died at the age of five. From 1921 to 1927 he studied history at the University of Munich , where he was in 1928 when Karl Alexander von Mueller with the work Europe and the Belgian-Bavarian exchange project in the 18th century to the Dr. phil. PhD .

On the recommendation of his American friend Truman Smith, representative of the US military attaché , Hanfstaengl attended a party event of the NSDAP in Munich's Bürgerbräukeller in 1922 as a spectator . It was here that he heard Adolf Hitler speak for the first time, who at the time had just served a one-month prison sentence for violating the peace. Impressed by Hitler's rhetorical talent and his ability to inspire the masses, he joined the NSDAP and intensified his contacts with Hitler and his supporters. Hanfstaengl also managed to attract the attention of music-loving Hitler through his piano playing.

As a member of the Munich upper class, Hanfstaengl used his contacts to introduce Hitler to financially strong sponsors. By collecting donations he helped to enable the NSDAP to purchase the Völkischer Beobachter as a party newspaper.

In November 1923, Hanfstaengl was involved in the Hitler putsch - the failed attempt by the NSDAP to take power in the German Reich by means of a coup from Bavaria. While Hanfstaengl was able to flee to Salzburg, Hitler initially went into hiding in Hanfstaengl's country house in Uffing am Staffelsee , but was arrested by the Bavarian police a few days later. According to Hanfstaengl's report, his wife Helene, née Niemeyer, is said to have prevented Hitler from shooting himself in view of the imminent arrest. 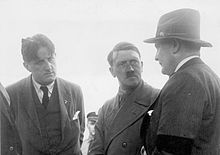 During Hitler's imprisonment in Landsberg am Lech and after his release from prison, Hanfstaengl kept in close contact with the party leader of the NSDAP.

In the spring of 1925 Hanfstaengl took part in the meeting to re-establish the NSDAP. Initially, however, he did not rejoin the newly founded party - allegedly in consultation with Hitler. He officially joined again on November 1, 1931 ( membership number 668.027).

In 1931 Hanfstaengl was appointed Foreign Press Chief of the NSDAP by Hitler, also because of his knowledge of foreign languages ​​and connections abroad. In this capacity he was entrusted with maintaining relations between the party and its high officials and the foreign correspondents working in Germany for the major foreign newspapers, especially the Anglo-Saxon countries. He arranged interviews of Hitler and other NSDAP greats, such as Gregor Strasser , with foreign newspaper correspondents and was also frequently available to answer questions from foreign journalists about the goals and program of the NSDAP or the party's attitude to current issues. As part of his work as foreign press chief, Hanfstaengl tried to organize a meeting between Hitler and the British statesman Winston Churchill - with whose son Randolph Churchill he was friends - in Munich in March 1932 . The meeting ultimately did not take place because Hitler did not attend the meeting at the last moment - allegedly because he had received a disparaging comment by Churchill on the NSDAP's Jewish policy.

In 1933 Hanfstaengl composed a Hitler suite at a “military tempo” on the occasion of the “ seizure of power ”; he conducted the Telefunken recordings himself. The fact that he appeared at a celebration at his old Harvard University in 1934 led to protests among lecturers and students. The management of the university turned down his offer to donate a scholarship for gifted students.

Hanfstaengl's position in the Nazi state and his personal relationship with Hitler and his Nazi elite deteriorated noticeably since 1934. According to Hanfstaengl's memoir, the immediate trigger was that his critical remarks about the Nazi regime were passed on to members of the Nazi elite by Unity Mitford . He was then to be liquidated on February 10, 1937. To this end, he was lured into a military aircraft on the pretext of having to carry out an order in Spain. He should have been forced to parachute over German soil in order to then shoot him down in the air. The plan failed because the pilot recognized Hanfstaengl on the plane. Therefore, he faked engine failure and landed on the small airfield in Klein-Polenz near Leipzig, which enabled Hanfstaengl to escape. Hitler and Göring then tried to dismiss the planned attack as a mere joke.

Hanfstaengl then fled to Switzerland and from there to Great Britain. His escape caused a sensation, especially in the USA, the New York Times reported on it. Attempts to get him to return with promises and threats failed. Hermann Göring wrote to him on March 19, 1937 that the Spanish joke had been intended to give him the opportunity to reflect. According to Goebbels' diaries, Hitler and SS leader Heinrich Himmler urged Hanfstaengl to be brought back to the German Reich in order to “arrest” him. Goebbels worried that Hanfstaengl (“a first class pig”) could pass on his knowledge of internal matters of the NSDAP to the foreign press. On April 13, 1937, he wrote in his diary: “If he unpacks, that will overshadow all the other emigrants .” He therefore made an enticement offer to Hanfstaengl: He should be involved in a film composition. In February 1938, Hanfstaengl asked Himmler to be rehabilitated from London, because he had been wronged with no name.

In Great Britain, Hanfstaengl was interned as an " enemy alien " at the beginning of World War II and transferred to Canada. At the instigation of the journalist John Franklin Carter , who, as an advisor to President Franklin D. Roosevelt, had psychological profiles drawn up for the Nazi leaders, he was transferred to the USA in 1942. Carter had met Hanfstaengl in 1930 when he had arranged an interview with Göring for him.

With the status of a British prisoner of war, Hanfstaengl evaluated radio broadcasts and information from the Third Reich on behalf of Carter, and he was particularly concerned with assessing the credibility of the information. His son Egon Hanfstaengl , who had volunteered for the US Army, was also asked about it. Some of Ernst Hanfstaengl's reports were submitted to Roosevelt. His longstanding personal relationship with Adolf Hitler should enable him to provide explanations for his actions and decisions as well as prognoses for further steps.

In April 1943, Hanfstaengl came to the conclusion that the reports from Berlin about the discovery of a mass grave with the bodies of thousands of Polish officers in a forest not far from the Russian village of Katyn were true. The perpetrators of the Katyn massacre are to be looked for on the Soviet side. However, the American military intelligence service OSS did not agree with this assessment; Roosevelt also rejected the version of Soviet perpetration.

Since the Hanfstaengl dossiers were of little value in the State Department's assessment , Carter was instructed by the White House to cease working with him on July 1, 1944. He is also to his demands for payment, one responsible for him officials increasingly Steinway - wings , better food and the restoration of his teeth have enervated.

After he had been held in various camps for some time after the end of the war, Hanfstaengl returned to Germany on September 3, 1946. In 1947 he applied for recognition as a Nazi victim and, according to press reports, demanded US $ 16,150 as compensation for injustice suffered. On January 13, 1949 he was rehabilitated by the Weilheim Chamber - among other things by the fact that a " wanted list " of people who should have been arrested after a successful invasion of Great Britain had been found in the Secret State Police Office ; it also had his name on it. In 1957 he published a book in English with his memoirs on the early days of the Nazi movement; In 1970 the German-language edition appeared, which was a commercial success.

His two volumes of Hitler in the cartoon world (1933/1934) in which Hanfstaengl political caricatures of the opponents of the Nazis, who from the time before the " seizure of power grandfathered" and Hitler showed had collected and commented, were in the Soviet occupation zone on the list of literature to be discarded is set.

The family business, the art publisher Franz Hanfstaengl , was run by his son Egon Hanfstaengl (1921–2007, godchild of Adolf Hitler) from 1958 until it was dissolved in 1980 .

Ernst Hanfstaengl's grave is in the Bogenhausen cemetery in Munich.