The elephant birds (Aepyornithidae, also Madagascar ostriches or Malagasy Vorompatras ) are an extinct family of ratites with the three genera Aepyornis , Mullerornis and Vorombe . It is known for fossils and numerous subfossil egg finds from the island of Madagascar off the east coast of Africa. The French Alfred Grandidier discovered a fossil of these birds for the first time during one of his research trips to the island between 1865 and 1870.

The aepyornithids had the typical cursorial anatomy (adjusted to speed) of a ground bird: the legs were long and the toes were short, while the flight apparatus was almost completely regressed. The arm bones are lost except for the humerus , the sternum is flat and keeled. The neck is long and has a relatively small skull. Vorombe titan was probably the heaviest bird of all time at an estimated 536 to 732 kg. Aepyornis maximus was also a larger representative of the taxon and should have reached between 2.7 and 3 m in height and over 400 kg in weight. This makes it one of the largest known birds in the history of the earth and the largest birds in historical time, comparable to Dromornis stirtoni or Brontornis burmeisteri from the Miocene or Pachystruthio dmanisensis from the Pleistocene . The giant moa ( Dinornis ) with a crown height of up to 3.6 m and an estimated weight of around 250 kg, which were exterminated at the end of the 14th century, were the only birds that reached similar dimensions during historical times. From Aepyornis maximus subfossil eggshells and complete eggs are also known, the length of which in some cases max. 34 cm and a width of 22.5 cm. 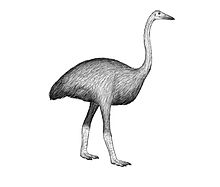 The aepyornithids were endemic to Madagascar . Madagascar separated from the continent of Africa as early as the Cretaceous Period , which some suggested that the Vorompatra lost its ability to fly in situ . Phylogenomic studies support the paraphyly of ratites in the classical view and suggest an independent loss of flight ability within ratites. Mitochondrial DNA suggests that elephant birds are closely related to a taxon of the kiwi , emus, and cassowary within the primitive jaw birds . 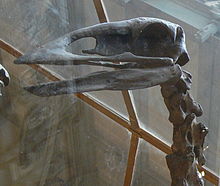 Skull of an Aepyornis maximus

There is no direct evidence of the food that elephant birds commonly ate. Most ratites living today are omnivores . However, there are thickly coated rainforest fruits in Madagascar, which some believe were designed for digestion by ratites. For example, the fruit of the now endangered coconut palm Voanioala gerardii has such a thick skin, and some Malagasy palm fruits have a dark blue-purple color (e.g. Revenea louvelii and Satranala decussilvae ), similar to those fruits preferred by cassowaries. 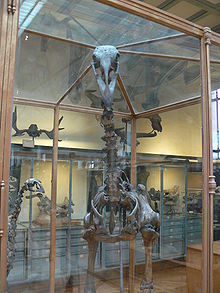 Skeleton of an Aepyornis maximus

lateral view of the skeleton of an Aepyornis maximus

The family Aepyornithidae is divided into three genera :

Vorompatras were once common in Madagascar and all over the island. There is broad agreement that the elephant bird's extinction is due to human influences. The big birds may have served as important meat suppliers. There is multiple evidence of slaughtered elephant birds. In particular, the eggs of the Vorompatras must have been endangered; there is evidence that they were prepared as meals. The slash and burn operations carried out by the residents probably also played an additional role, as it destroyed large areas of the elephant bird's habitat. It is also possible that diseases transmitted by imported poultry played a role.

The date of the extinction of the elephant birds is not known for sure. Archaeological evidence shows survival until at least the year 1000. Occasionally, it is speculated that the Vorompatra survived until the 17th century. The first French governor of Madagascar, Étienne de Flacourt , told of a large bird that laid the eggs of an ostrich and inhabited the Ampatres. This bird looks for the most remote regions in order not to be threatened by humans.

It is often assumed that the Aepyornithidae are the origin of the legends about the bird Roch (other spellings: Vogel Ruch or Rock). A historical reference to this can be found in Megiser (1623). The name elephant bird comes from Marco Polo's description of the roch, in which an eagle-like bird the size of an elephant was described. Eggs of Vorompatra may have been mistakenly interpreted as those of a giant bird of prey , which is why Aepyornis maximus earned this name. Another possibility is that the roch is based on sightings of the now exterminated Madagascan relative of the crown eagle , Stephanoaetus mahery .

Vorompatra is the old Malagasy name for Aepyornis maximus , of which several spellings exist. Vorompatra means "bird of the Ampatres". The Ampatres are today's Androy region. This coincides with Étienne de Flacourt's report, according to which the alleged relics of the elephant bird would inhabit the Ampatres.