The title of this article is ambiguous. Further meanings are listed under OPS . 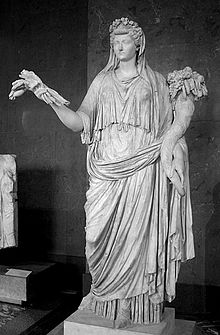 Livia Drusilla as ops, with a sheaf of wheat and a cornucopia

Ops (also Ops Consivia ) is a deity of the ancient Roman religion .

The goddess Ops was later equated with the goddess Rhea in Greek mythology . In the ancient Roman religion the world was ruled by personifications of nature and natural phenomena. Ops stood for harvest blessings and fertility. In addition, she is the patron goddess of newborn babies and was invoked as the patron goddess of Rome during the war . Analogous to the Greek model, she was the wife of Saturnus and the mother of Jupiter .

The Main Inner Belt Asteroid (2736) Ops is named after the goddess.

Ops is from the 3rd century BC. Chr. (The comedy poet Plautus ) to the 5th century AD (the philosopher and grammarian Macrobius Ambrosius Theodosius ) mentioned by numerous Roman sources. Different aspects are documented.

In several comedies, Plautus describes Ops as the mother of Juno and Jupiter, whose father Saturnus is her husband and brother at the same time. With this he ensures the equation of the ops with the Greek goddess Rhea in the relative structure Rhea with brother / husband Kronos and children Zeus and Hera .

The main source, Marcus Terentius Varro , also knows Saturnus and Ops as a pair of gods. But he also calls them terra ops , ops mater (mother earth) and elsewhere relates them to Consus , the god of the harvested crops, which makes them a goddess of the harvest blessing. On the opeconsiva consecrated to her, ritual acts are performed in the Regia sacrarium in Rome. This documents the importance of this goddess as well as preserved stone inscriptions.

In late antiquity, Macrobius Ambrosius Theodosius once again passed down Ops in the Saturnalia as the wife of Saturnus, earth goddess, goddess of fruits and also as the embodiment of the terms ops (= "effort") and opus (= "work"). But he also found her name in ancient writings as the original protective deity of Rome, especially during war.