South West England ( English for South West England is) one of the nine regions of England and is located in the southwest of the United Kingdom . The region roughly coincides with the counties traditionally grouped under the term West Country and was originally defined by the British government for statistical and administrative purposes, but without political legitimacy. Cornwall is often excluded from this geographical and cultural classification because of its clearly Celtic character.

The region largely coincides with the historic area of Wessex (except Hampshire and Berkshire ) and includes the former Celtic kingdom of Dumnonia , which included Cornwall, Devon and parts of Somerset and Dorset. After 1974 it was divided into the counties of Avon , Cornwall, Devon, Dorset, Gloucestershire, Somerset and Wiltshire. After the administrative reform in 1996, a reorganization took place, whereby the county of Avon was dissolved and the other counties only retained a ceremonial status.

The region includes the following counties and unitary authorities :

In 2001 south-west England had 4,928,434 inhabitants (result of the census), of which around 3.5 million were Christians, 750,000 indicated no religion. The population had grown by 12.5 percent in 20 years, making it the fastest growing in England. The largest increase in population since 1981 was in Teignbridge with 26.3 percent. In 2003 the population exceeded the five million mark and rose by 5.8 percent by 2009. The fastest growing area is currently Bristol, which is home to around 10 percent of the population in the metropolitan area.

Bristol's historic docks have long been the main source of income

Since the decline of mining, Cornwall has lived on agriculture and tourism 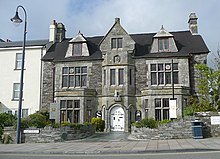 The King Artus Museum in Tintagel, a destination for visitors interested in history

The most economically productive areas within the region are Bristol , the corridor along the M4 Motorway and south-east Dorset, all areas with the best connections to London . Bristol's economy was initially characterized by maritime trade and in the past lived mainly from the export of local, mostly ready-made sheep's wool, the import of tobacco and other colonial goods and the slave trade, and for a long time also from shipbuilding. In the 20th century a new branch of the economy emerged with the aviation industry; well-known examples are Rolls-Royce (military sector ) and Bristol Aircraft Company .

Cornwall is considered an economically weak area. By the end of the 19th century, Cornwall was supplying more than half of the world's tin needs . The name of the place Tintagel (Tin = English tin ) probably goes back to this. Since the decline of mining, only agriculture has been practiced here. In 2003, Cornwall contributed only 6.5 percent to the economic strength of South West England and, as an Objective 1 region, received funding under the regional policy of the European Union . As early as the 1990s, tourism in Cornwall became an important source of income. In 2002 around five million visitors were counted. The economic importance of tourism also grew in the rest of the country. In 2001 there were 13,800 hotels with a total of around 250,000 beds in South West England. In addition to those looking for relaxation, visitors interested in history also come to the country. Stonehenge , which has been a World Heritage Site since 1986 , and other mythical sites, for example from the legends of King Arthur , repeatedly attract international interest.