The title of this article is ambiguous. For the Hagana ship, see HMCS Norsyd .

The Hagana , also written Haganah , ( Hebrew הַהֲגַנָּה ha-Hagannah , German for “the defense” ) was a Zionist paramilitary underground organization in Palestine during the British mandate (1920–1948). Immediately after the establishment of the State of Israel , the Hagana was transferred to the Israel Defense Forces .

As early as the late 19th century, as a reaction to the pogroms in Russia in 1887, an organization of young people under this name had emerged. A direct predecessor of the Hagana was the HaSchomer group founded in 1909 . It was a small association of Jewish immigrants that never exceeded 100 members.

A part of Palestine was promised in the Balfour Declaration of 1917 as the “national home for the Jewish people in Palestine”, whereby the rights of the non-Jewish communities existing there were to be preserved. As a result, there was massive Jewish immigration to Palestine. The Arab riots from April 1920 in the Old City of Jerusalem and May 1921 in Jaffa reinforced the Yishuv , the sense of threat.

The reason for the founding of the organization was a Jewish pogrom carried out by Palestinian Arabs in Jerusalem in April 1920 as a result of a Muslim procession . Six Jews were killed in the process. Around two hundred were injured. The leadership of the Jewish Agency no longer wanted to rely on British colonial troops to defend the settlements. HaShomer was no longer sufficient, which is why it was dissolved in June 1920 and the more centralized Hagana was founded under the leadership of Elijahu Golomb . Its first commander-in-chief was Youssef Hecht, a 28-year-old veteran of the British Jewish Battalion . Hecht, however, was only nominally the highest in rank, as, following the organizational model of the Soviet Union , he was dependent on a council with five full members and two candidates.

The Hagana was run as a militia covering a large proportion of the Jewish population capable of military service. Since it was only possible to practice with small units, the training did not go beyond a troop leader course. The organization served no more than a dozen professional soldiers during the 1920s , many of whom were also political activists. Since gun ownership was illegal under the mandate administration, firearms and ammunition were mostly smuggled into the country via French-controlled Syria.

During the relatively quiet first nine years, the Hagana was nevertheless a rather loose organization of local defense groups in larger towns and in a few settlements. The organization was under the civil leadership of the Histadrut union and was subject to its strong influence.

As a result of the Hebron massacre and further unrest in 1929, which resulted in 133 deaths on the Jewish side, the role of the Hagana changed dramatically. It became a much larger organization, encompassing almost all youth and adults in the rural settlements and having thousands of members in the cities. She began to get foreign weapons and manufacture simple military equipment and hand grenades (see: Israel Military Industries ). At the same time, it transformed from an untrained militia into a serious paramilitary group .

Out of dissatisfaction with the overall rather moderate attitude of the Hagana, most members of the right wing split off in 1931 and formed the Irgun Tzwa'i Le'umi (better known in Israel under the name Etzel ). The underground organization Irgun and its split-off Lechi became known for their secret, mostly terrorist missions.

Havlagah bus during the Arab uprising

Members of the Jewish Settlement Police, 1938

In 1936 the Hagana consisted of around 10,000 active and around 40,000 ready-to-go fighters. During the Arab uprising from 1936 to 1939, members of the Hagana were tolerated as part of the newly formed Jewish Settlement Police , a division of Notrim . Initially, this unit had a purely defensive character aimed at securing Jewish settlements. Only towards the end of the uprising did this unit take a more offensive position. The experience of those years later proved useful to the Jewish side in the Palestine War of 1947-1949.

In order to meet the demands of the Arab uprising, Jewish immigration to Palestine was restricted with the British White Paper of 1939 , after which the Hagana organized demonstrations against the British as well as the illegal immigration of Aliyah Bet , which operated from bases in Switzerland and Turkey .

The SS Patria , a French passenger ship , was blown up by the Hagana in 1940 in Haifa Bay in order to sabotage the transfer of Jewish passengers to Mauritius . Over 250 people died.

Despite the White Paper of 1939 , which laid down the immigration restrictions for Jews and thus deeply angered the Jewish leadership in Palestine, David Ben-Gurion, as chairman of the Jewish Agency, sided with the British after the outbreak of war:

The Irgun , however, took a more extreme position and began attacking British facilities.

In the first year of World War II , the British Army asked the Hagana for assistance, fearing a German breakthrough in North Africa. As a result, many young Jewish settlers, including many who had only recently fled Europe to Palestine, became members of the British army, sometimes under very questionable conditions, as Hagana member Michael Evenari recalled:

“Since the English were completely unprepared for the war, there were no English flak cannons in Palestine. Our cannons were small guns captured from the Italians, which we called "pea shooters". We had to find out for ourselves how they worked and invent better aiming devices for them. Here, drew Hans Jonas , a doctor of philosophy and later well-known professor of philosophy in North America, in particular. He was therefore promoted to "armourer". Only later did we get Bofors, real anti-aircraft guns. We were set up in sections of six each (including a cook) with a cannon for the air raid protection of Haifa at the train station, in the harbor, around the oil refinery and also on the Dead Sea to protect the potash factory. Haifa was then attacked by Italian, Vichy-French and German planes. As far as I know, the port was attacked by ships once. We went into action a few times with our »pea shooters«. "

However, after Rommel was defeated in El-Alamein in 1942 , the British ended their unqualified support of the Hagana. The Jewish soldiers were relocated between Egypt and Haifa several times before being relocated to Cyprus in late 1943. Here they were once again condemned to largely inactive, before the Jewish Brigade was founded within the British Army in 1944 after long negotiations (including those within the UK ) . Her brigade badge was the Star of David , her unit belonged to the British 8th Army . Evenari reports, however, that non-Jewish English artillerymen had to be used in the brigade, which led to tensions and anti-Semitic conflicts. And there were hierarchy problems: “As a battery sergeant major, I was the highest rank among the NCOs. As far as I know, it was an unusual situation, because the King's Regulations only allow British soldiers to command British soldiers. "

The Jewish Brigade consisted of 5,000 soldiers. It was first used in Italy from September 1944 and then moved across defeated Germany to Belgium. It was dissolved in 1946.

In total, more than 30,000 Palestinian Jews served in the British Army during the war.

In the spring of 1941, the Hagana founded the Palmach ( acronym for Plugot Machatz - Einsatztruppen), a military-like facility that focused on training young people. It was comparatively small - until 1947 it consisted of only five battalions (approx. 2,000 men) - but played an important role, since its members had received basic military skills and leadership skills that qualified them for leadership roles in the later Israeli army.

The Hagana ship Jewish State in the port of Haifa , 1947 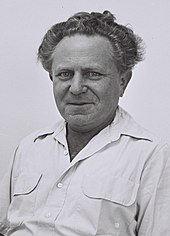 After the war, the Hagana carried out anti-British operations in Palestine, e.g. B. the liberation of interned immigrants from the Atlit Camp , bomb attacks on the railway network and acts of sabotage on radar stations and police stations of the British. She also continued to organize the immigration of Jews, such as the ride of European survivors of the Holocaust with the Exodus , and other forms of Beriha .

In 1946 Yisrael Galili , who had been part of the Haganah leadership since 1935, was appointed chief of staff.

In the American occupation zone in Germany , the Hagana maintained two illegal military schools in Bavaria from 1946: the highland camp near Königsdorf in Upper Bavaria - where the Hitler Youth had previously received military training - and until spring 1947 also a training camp in Wildbad in Middle Franconia .

On May 28, 1948, less than two weeks after the establishment of the State of Israel on May 14, the Israeli Provisional Government formed the new Israeli army . At the same time, all other armed groups were banned. The Irgun accepted the decision after a brief clash between Hagana and Irgun. Eventually the Irgun laid down their arms and Menachem Begin transformed his militia into a political party, the Cherut .

The Hagana Museum in Tel Aviv

Documentation on the history of the Hagana produced by kibbutznik Yair Pelleg can be found in the house of the ghetto fighters of kibbutz Lochamej haGeta'ot north of Haifa . In this kibbutz, founded by surviving ghetto fighters, the central commemorations of the Shoah, the surviving fighters of the Warsaw ghetto uprising and the fallen Palmachniks took place until the Yad Vashem memorial in Jerusalem was founded .

The Hagana Museum is located on Tel Aviv Rothschild Boulevard, at number 23, the former home of Hagana founder Eliyahu Golomb. It is diagonally opposite the Israeli Independence Hall , where the Israeli declaration of independence took place on May 14, 1948 .