Transitional camp for immigrants near Nahariya , 1952 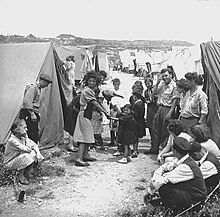 The Jewish Agency was founded on August 11, 1929 at the 16th  Zionist Congress . She was the representative of the Jews provided for in the League of Nations Mandate for Palestine and served as the contact point for the British Mandate Administration . Only she was authorized to negotiate with the mandate administration. The Jewish Agency was also responsible for the internal affairs of the Jews living in Palestine, the yishuv .

In the state of Israel

The Jewish Agency maintains several absorption centers in the State of Israel , in which immigrants can find accommodation for a limited period of time. In the 1950s, on the other hand, because of their large number , oriental , predominantly Arab Jewish refugees and expellees were usually only accepted into so-called Maʿabbarot (מַעְבָּרוֹת, sg. מַעְבָּרָה Maʿabbarah , German for ' interim camp ' ), makeshift arrangements where they often waited for years to move to regular apartments. At the local level there are numerous organizations that offer various social support measures and educational programs for immigrants.

In 1993 the Jewish Agency launched the “Alijah 2000” project. It includes around 200 alija and absorption programs. "Alijah 2000" tries to organize housing and workplaces even before the arrival of the oleh (immigrant) in Israel. The organization is involved in more than 140 subsidiary companies (as of 2016).

( Elected Chairman of the Executive )

Often the candidate supported by the Israeli prime minister is elected chairman. The election of Jitzchak Herzog in 2018 was the first exception in 23 years.