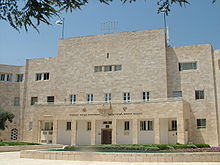 Rechavia ( Hebrew רְחַבְיָה Rəchavjah , English Rehavia , Arabic رَحَفْيَا, DMG Raḥafyā ) is a district of Jerusalem between the city center and the Talpiot district . Since its construction, the district has been known for its numerous well-known residents, including professors from the Hebrew University of Jerusalem , government employees and diplomats, but also intellectuals and thinkers from science and culture. The quarter is still one of the more affluent parts of the city.

Since its construction in the 1920s, the quarter has traditionally been associated with the German-Jewish educated middle class, which resulted on the one hand from the large number of immigrants and refugees from Germany and on the other hand from the influence of urban planning based on the German model the architects Erich Mendelsohn and Richard Kauffmann , who come from Germany, are sometimes strongly influenced in character and dimension by the green districts of Dahlem or Grunewald in Berlin . With the Schocken Library (by the German-Jewish publisher Salman Schocken ), Israel's largest German-language book collection is still in the neighborhood.

Name of the quarter

The architect Elīʿeser Jellīn named the quarter after Rechavjah , a grandson of Moses on the part of his son Elieser .

The Bonem House, in the international style typical of the district from 1935

Rechavia was founded in 1921 on a site owned by the Greek Orthodox Church that was acquired by the Palestine Land Development Company (PLDC). The Jewish National Fund bought the land and commissioned the German-Jewish architect Richard Kauffmann to design a garden settlement. Later Rechavia came back into the possession of the PLDC in exchange for land in the Jezreel plain , although the Jewish National Fund held some land in its possession. Rechavia High School, Yeshurun ​​Synagogue and Bejt ha-Mossadot ha-Le'umijjim (בֵית הַמּוֹסָדוֹת הלְאוּמִיִּים House of National Institutions , built 1928–1936), u. a. Seat of ha-Sochnut ha-Jehudit le-Eretz Jisra'el (הַסּוֹכְנוּתִ היְּהוּדִית לְאֶרֶץ יִשְׂרָאֵל Jewish Agency for Israel ) were built on this land. The garden settlements in Europe were the model for Rechavia, and the architecture was based on the international style . In its first decades the quarter was considered a “German” part of town. The Jerusalem architecture historian David Kroyanker described Rechavia as a “Prussian island in the sea of ​​the Orient.” The library, designed between 1934 and 1936 by Erich Mendelsohn for his long-time patron Salman Schocken , with around 60,000 works is one of the most important examples of German-Jewish cultural heritage in Israel.

The first phase, called "Rechavia Alef", initially with 114 private plots for single-family houses and gardens, was created from 1922 onwards under the design responsibility of Richard Kauffmann , the leading architect and town planner of the Sochnut. Kauffmann designed twenty private houses in the district itself - including "Beit Aghion", the current residence of the Israeli Prime Minister . Rechavia was bordered by King George Street to the east, Ramban Street to the south, Ussishkin Street to the west and Keren Kayemet Street to the north. In order to maintain the quiet character, the district administration only allowed shops to open at the corners of the two main streets. The narrow back streets didn't allow for too much traffic. The tree-lined boulevard in the middle of the neighborhood was a pedestrian zone. After further acquisition of land in 1930, taking Kauffmann's plans into account, “Rechavia Bet” was built in the second construction phase, heading south towards Gaza Street.

The Gymnasia Rechavia was the second modern, Hebrew grammar school of the later State of Israel, after the Hebrew Herzlia grammar school opened in Tel Aviv in 1905 . The grammar school was built in Jerusalem in 1909, moved to its current home on HaKeren HaKayemet Le-Israel-Strasse in 1928, and also became famous as a teaching facility for the later Israeli President Yitzhak Ben-Zvi and his wife Rachel Yanait . Notable graduates of the grammar school include the writers Abraham B. Jehoshua and Amos Oz as well as the Bible scholar Trude Dothan , and the later President of the Supreme Court of Israel Miriam Naor .

Most of Rechavia's street names are named after philosophers and scholars of the Golden Jewish Age on the Iberian Peninsula in the 14th and 15th centuries. So, among others, according to Isaac Abrabenel , Moses Maimonides (Rambam), Abraham ibn Esra , Rabbi Moses ben Nachman (Ramban) and David Kimchi (Radak). Notoriously one of the exceptions is the street named after the Zionist leader Menachem Ussishkin , which was previously named after Jehuda Halevy , but was renamed after him on the occasion of the Zionist politician's 70th birthday.

In the context of literature, the quarter was discussed and sketched in poems and essays during the post-war period by Mascha Kaléko , in Amos Oz 's novel A Story of Love and Darkness (2002) or Yoram Kaniuk's diary novel The Last Berliner (2002). The cultural and historical legacy of German Jewry in the still young Jewish state after 1948 was always discussed in particular.