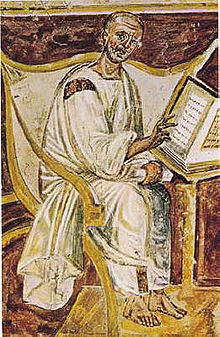 De vera religione ( Latin "About the true religion") is a work by the Christian author Augustine of Hippo and is one of his early writings. He wrote it in 390 , three years after his conversion .

In De vera religione Augustine processes his break with Manichaeism and his conversion to Christianity . He wants to justify his decision to his patron Romanianus. To represent Christian theology , he makes use of the doctrine of Neoplatonism . At the same time, however, he also shows the limits of Neoplatonic philosophy and develops the practice of true cult from the doctrine of the correct image of God. At the time De vera religione was written , Augustine had no church office.

"The access to a good and happy life is opened only by the true religion, which only worships one God". (I.1) This is how Augustine begins his work. In the introductory part he deals with the teachings of the Platonists and Manicheans. He sees the Neoplatonists very close to Christian doctrine, but criticizes their inconsistency. Thus, although they teach the One as the highest and as the origin of all being, they cannot transfer this into the practice of cult: They worship the pagan deities. Their cult practice lacks congruence with the doctrine and thus also any truth. Socrates and Plato took the right path, but could not bring their teachings to the people in order to practice such a true religion. This step was only taken through Jesus Christ .

In spite of the rejection of any idolatry , Augustine expressly emphasizes: All being and thus all being is good, because it is from the true God who is supreme. Bad and evil are only deficient insofar as they have less being and are turned towards death. So there is nothing inherently evil.

Man can only achieve happiness in so far as he turns to the highest being, God. If he sins, this is done in free will to turn away from God and draw towards death. The worship of God takes place in the spirit of this freedom. Augustine presents Judaism as a counterexample: They worship God in order to “buy” a carefree earthly life. The price of this life is compliance with the laws YHWH placed on them in the old covenant . In the New Testament covenant , man stands in freedom before God. God does not want to be worshiped for the sake of earthly goods, but for himself. So the cult finds its fulfillment in the encounter with God.

For Augustine, the following applies: Caring for physical well-being only deprives people of their happiness. He calls for us to turn away from the lowly, from the earthly and to place the search for God as the highest at the center of our lives.

Augustine now asks how far reason can advance from the visible to the invisible. He notices that the spirit is able to judge the senses and the earthly and draws the conclusion that reason is superior to everything transient. The criterion of the judgment of reason is true equality and unity, that is, truth. Augustine realizes that the truth cannot err and is thus raised above the spirit, which can err. God and truth are one and the same; only he can judge us. Truth and therefore God can only be recognized by the spirit.

At this point Augustine can no longer follow Neoplatonism. Because in the Neoplatonic theurgy the human being is seen as passive in the encounter with God. An intellectual experience of God is impossible for the Neoplatonist. The mind is only prepared for this encounter; it can never reach God on its own. This leads to the postulate of two truths: that of human knowledge and that of divine works. The Neoplatonist can no longer understand what he worships. For Augustine, however, only those cult elements are sanctified that the executor understands.

Augustine regards cultic behavior as belonging to human reason. He cannot therefore accept the atheistic thesis according to which man does not worship anything. Because man always worships something by hoping for something bliss and happiness. So the atheist runs the risk of succumbing to the temporal.

The ephemeral, however, is not worthy of man's admiration, for it is of a lower being than his reason. This can recognize truth everywhere, even in the lower, because everything is from God. It is through whom we judge and so we can find it in every judgment. The truth is above man, but it cannot be withdrawn from him unless he turns away from it. By worshiping the truth, man becomes invincible. Through them man becomes free in God. God is the light in whose light man comes to knowledge. Truth knows neither time nor space, but enables both. So it is not a private good. In so far as it is the object of the teaching and practice of Christianity, the true religion can be seen in its teaching.