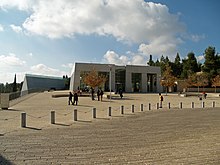 Yad Vashem (English transcription from Hebrew יד ושם“Monument and Name”; in German transcription Jad Washem , occasionally also Yad Washem ) is the name of the "Memorial of the Martyrs and Heroes of the State of Israel in the Holocaust ", the most important memorial which commemorates the Nazi extermination and documents it scientifically.

The memorial is located in Jerusalem . It was established as a state agency by the Yad Vashem Act, which the Knesset passed on August 19, 1953. Yad Vashem is visited by over two million people annually.

Yad Vashem ( Hebrew יד ושםfor “monument and name”) got its name from Isa 56,5  EU : “I will erect a monument to all of you in my house and within my walls , I will give you a name that is worth more than sons and daughters: an eternal name I give it to them that will never be redeemed. "

The first considerations for a Holocaust memorial in Jerusalem go back to 1942 and were discussed at a board meeting of the Jewish National Fund . In 1945, Yad Vashem established a provisional board of directors that included David Remez (chairman), Shlomo Zalman Shragai, Baruch Zuckerman and Mordechai Shenhavi. After the establishment of the State of Israel, its first President Chaim Weizmann explicitly endorsed the project of a Holocaust memorial in 1948. However, due to the Palestine War of 1948–1949, implementation was delayed considerably.

On August 19, 1953, the Israeli parliament, the Knesset, unanimously passed the Yad Vashem Act. The management of the planned memorial had already started various projects: collection of the names of the victims of the Holocaust, documentation of personal testimonies of survivors, preparatory studies for future research and for planned publications. On July 29, 1954, the foundation stone for the central museum building of Yad Vashem was laid on the Mount of Remembrance (Mount Herzl | Har ha-Zikaron) west of Jerusalem. The museum and other parts of the memorial that had already been completed were opened to the public in 1957.

Since then, Yad Vashem has been continuously expanded and expanded and currently comprises the following departments and institutions:

Museum of the History of the Holocaust

The "Museum of the History of the Holocaust" documents the history of the persecution of Jews in nine underground galleries . The genocide of European Jews is depicted on the basis of video installations, photographs, exhibits, documents and works of art. The exhibition is arranged chronologically and begins with Jewish life in Europe before the Holocaust. It then leads on to the emergence of National Socialism in Germany , the Second World War and the destruction of Jewish life in Poland , the ghettos (with the replica of the "Ulica Leszno", the main street of the Warsaw ghetto ) to internment in concentration camps and extermination camps such as Auschwitz . This is followed by the resistance and the death marches . The exhibition ends with the situation of the survivors, their search for relatives, life in DP camps and emigration to Israel or other countries. Videos with statements by Holocaust survivors are presented on more than 100 screens.

The new building of the museum ( architect : Mosche Safdie ) was opened in March 2005.

The extensive area includes a large number of sculptures and individual memorials. Special mention should be made of: 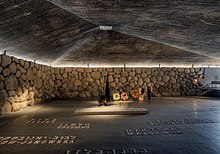 The "Hall of Remembrance" ( Hebrew אוהל יזכור,Ohel Jizkor) with the memorial flame for the victims of the Holocaust. This flame, in the form of a broken bronze chalice, is in the middle of the hall. In front of it there is a stone slab under which ashes from the concentration camps are buried. In the hall, the names of the 22 largest concentration camps are engraved on the floor, exemplifying all the places of extermination. Architect: Arieh Elhanani

Avenue of the Righteous Among the Nations 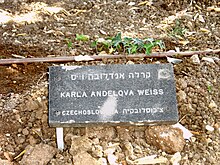 The "avenue of the righteous among the nations " is lined with trees that have been planted for the "righteous". The Righteous Among the Nations refers to non-Jewish persons and organizations that opposed the Nazi regime in order to save Jews. Their names and their countries of origin are noted on boards next to the trees. Examples are Oskar Schindler , Chiune Sugihara , Berthold Beitz , Giorgio Perlasca or Aristides de Sousa Mendes . The project started in 1962. In August 2018, a total of 26,973 people were listed as “Righteous Among the Nations”, 616 of them are Germans. In 2017, 460 new recognitions were added.

Garden of the Righteous Among the Nations 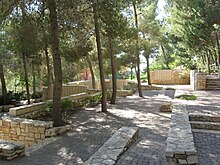 The "Garden of the Righteous Among the Nations"

In the “Garden of the Righteous Among the Nations”, plates with their names have been placed for non-Jewish rescuers since 1996. This is also where the award ceremonies for these people are held. According to the Federal Foreign Office, the memorial had received almost five million euros from the federal government through project funding by the end of 2009. The contract of February 1, 2012 is intended to further secure support. Germany has pledged further financial aid of 10 million euros.

Monument to the children 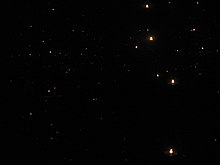 The five candles in the mirrored hall in Yad Vashem

The “ Memorial for the Children ” erected in 1987 is dedicated to the memory of the 1.5 million Jewish children murdered by the National Socialists . The monument is laid out as an underground space in which five candles are reflected in the darkness in such a way that a whole starry sky is created. In the background, the names , age and place of birth of the children are played on a tape. This endless tape takes about three months to reproduce all the names.

The hall of names

In the “ Hall of Names ”, the last room in the tour of the museum on the history of the Holocaust, the names and personal data of the Jewish victims of the National Socialist mass murder are collected. The information on “ memorial sheets ” provided by relatives and friends of the murdered serves as the basis for this . Often the memorial sheets are the only memories of the victims.

Memorial in memory of the deportees

Memorial in memory of the deportees

The “Memorial to the Memory of the Deported ” reminds of the transports to the concentration camps with an old Reichsbahnwagen ; the wagon stands over the slope on a bridge construction that leads nowhere and is an original transport wagon that was handed over to Yad Vashem by the Polish government.

Valley of the Communities

Valley of the Communities

On an area of ​​about one hectare in the “Valley of the Communities” (Hebrew: ק הקהילות, Bik'at haKehilot ) on 107 stone walls, the over 5000 Jewish communities that were wholly or partially destroyed during the Shoah are commemorated.

The Art Museum (Holocaust Art Museum) houses an art collection of 10,000 drawings and paintings by concentration camp inmates. A small part, 100 works, was made accessible to the public in the German Historical Museum in Berlin from January 26, 2016 to April 3, 2016.

Pillar of Heroism , "Pillar of Valor"

The website Yad-Vashem.org.il contains a database with the names and details of the persecution of more than 4.2 million Holocaust victims. The data collection is part of a project to document the names of all victims and their life stories. After 50 years of research, this database represents the digitized version of the research results. In the last ten years, more than 1,500 people have digitized the data. According to the company, it is the most comprehensive data collection of its kind. Another database on this website allows research into the Europe-wide trains to the camps.

In many European countries there are partnership associations that represent the goals of Yad Vashem, for example the Austrian Friends of Yad Vashem: They have been supporting the goals of Yad Vashem since 2003. The main tasks consist of remembering the Holocaust in Austria through special commemorative and educational projects. Jewish culture, which has been lost in many places, is to be revived and kept in memory through cultural events.

In June 2012, the outer walls and floor of Yad Vashem were sprayed with around ten large-format graffiti in Hebrew by three ultra-Orthodox Jews. Examples: “The Zionists wanted the Holocaust”, “Hitler, thank you for the Holocaust”, “If Hitler had not existed, the Zionists would have invented him”. The graffito "to no longer allow the Zionists to hold manipulative memorial ceremonies in Auschwitz" was addressed to the Polish government.

75 years after the liberation of Auschwitz , the 5th World Holocaust Forum took place in Yad Vashem on January 23, 2020 , attended by 50 heads of state, including the current heads of state of the then allied powers , Russia's President Vladimir Putin , the Vice President of the USA , Mike Pence , French President Emmanuel Macron and the British heir to the throne Prince Charles . Federal President Frank-Walter Steinmeier was the first German head of state to speak in Yad Vashem at the central commemorative event. He began his speech in Hebrew with the blessing Shehechejanu : Praise be to the Lord [...] that he lets me be here today. The Federal President confessed to the German guilt for the Holocaust and assured the protection of Jewish life: We fight anti-Semitism! We defy the poison of nationalism! We protect Jewish life! We stand on the side of Israel. I renew this promise here in Yad Vashem in front of the world . The previous World Holocaust Forums took place in Krakow in 2005, in Kiev in 2006, in Krakow in 2010 and in Prague in 2015.