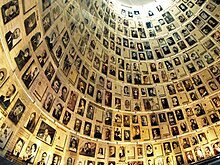 The US Chief of Staff Martin E. Dempsey on a tour.

The Hall of Names in Yad Vashem is the repository of the names of Holocaust victims . For the Jewish victims of the Holocaust , Yad Vashem collects memorial sheets that are submitted by survivors, family members or friends and acquaintances and document the names of the victims. Apart from collecting the memorial sheets, names from lists of deportations , concentration and extermination camps and ghetto files have been added and can be viewed in the central database.

In 1968 a "Room of Names" was opened in Yad Vashem, in which the handwritten memorial sheets were kept and which was replaced by the Hall of Names in the 1970s. In the 1980s, Yad Vashem microfilmed nearly 1.1 million memorial sheets .

In 1999 Yad Vashem started a major project to computerize more than 1.1 million memorial sheets. Since 2004 the Central Database of the Names of the Holocaust Victims has been available on the Yad Vashem website. To date, four and a half of the six million Jews who were murdered by the National Socialists and their accomplices have been recorded here by name.

600 photographs of victims are shown in the conical ceiling and symbolize the 6 million Jews murdered in the Holocaust. From here you can get to the computer center, where you can search for the names of the Holocaust victims in the central database. In addition, new memorial sheets and registration forms for Holocaust survivors can be filled out here.