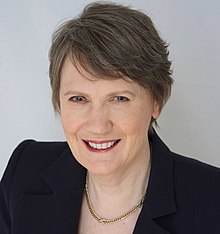 Helen Elizabeth Clark , ONZ , (* 26. February 1950 in Hamilton ) is a New Zealand politician of the Labor Party . From December 5, 1999 to November 2008, she was the 37th Prime Minister of New Zealand . From 2009 to 2017 she headed the United Nations Development Program , holding the third highest office of the United Nations .

Clark was a candidate for the office of UN Secretary-General in the South Pacific region in 2016 .

As a politician, she was first Minister for Housing and Nature Conservation, then Minister of Health and later Deputy Prime Minister. In the 1990s, under Jim Bolger and Jenny Shipley's reign of the National Party , she was opposition leader in the House of Representatives .

In 1999, Clark replaced her predecessor Jenny Shipley with a minority government , a coalition with the Alliance Party and the Green Party . From 2002 she headed a coalition government made up of the Progressive Coalition Party , Green Party and United Future New Zealand .

At the beginning of her term of office, during which the country experienced a strong economic boom, the Social Democrat Helen Clark New Zealand tried to cautiously turn back privatizations . When Clark was confirmed in office against challenger Don Brash in 2005, New Zealand had the lowest unemployment rate in any developed country. From August 29, 2008 to November 19, 2008, Clark was New Zealand's Secretary of State .

In the elections of November 8, 2008, Clarks ruling coalition lost the majority in New Zealand's parliament to the opposition alliance led by John Key , who succeeded them.

Helen Clark has always emphasized that privatization and deregulation have not brought the hoped-for successes. On the contrary, this economic policy has led to a disaster, so that the state had to buy back the railways and airlines. The privatization of telecommunications only led from a state to a private monopoly. For example, the private energy companies would have only withdrawn their profit for years and invested neither in maintenance nor in the renewal of the networks. Also the sale of banks - e.g. B. Postbank and Bank of New Zealand - was not a success. Because big banks have no interest in the little man's money, in some cities you couldn't even open an account for years.