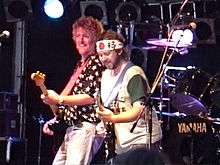 Vincent Gunia, who mostly called himself Paul Vincent as a musician, played during his school days until the late 1960s a. a. in the beat bands Park Lane and Missus Beastly . After leaving high school, he moved to Munich with the aim of making a name for himself in the local music scene. Vincent met Olaf Kübler , jazz saxophonist and manager of the band Amon Düül II , through his musician friend Keith Forsey . In 1970 he produced the album Hallelujah Babe with Forsey in the formation Hallelujah , which was recorded in London's Tangerine Studio . At the same time, he worked in Munich with producer and musician Klaus Doldinger and was guitarist in his jazz rock band Motherhood .

Through his collaboration with Doldinger and Kübler, Paul Vincent was also booked as a studio musician for numerous rock, pop and hit productions between 1970 and 1985 ; so he played u. a. for artists like Peter Maffay , Peter Alexander , Michael Holm , Rex Gildo , Gitte , Joy Fleming , Roberto Blanco , Ulla Meinecke , Stefan Waggershausen , Mireille Mathieu , Katja Ebstein , Edo Zanki , Niagara and Nicole .

Since many international artists were also recording in Munich studios at the time, Paul Vincent also played as a guest musician a. a. for Freddie Mercury , Sting , Eric Burdon , Meat Loaf and Gianna Nannini .

Between 1976 and 1980 he was a. a. Guitarist, co-producer, composer and arranger for Udo Lindenberg and member of his panic orchestra .

Since 1979 Gunia has composed and produced music for German television series and films . For example, he wrote the dramaturgical music of some Tatort episodes, almost all of the music for the television series Doppelter Einsatz , the title melodies and the soundtracks for Aufachse , Mission Eureka and Ein Haus in der Toscana, as well as the dramaturgical music of all previous seasons of In All Friendship ( ARD / MDR ). Gunia also composed for predominantly German film productions, including African Timber , Der Schneemann and Die Sturzflieger .

He also published The Rock Guitar Book in 1993 and published regularly as a columnist in the music journal Soundcheck from 1987 to 2005 .

After multiple nominations in previous years, Gunia received the German Television Award in 2001 together with Tito Larriva , Sema Mutlu and Derya Mutlu in the category of best film music for the music for the TV movie The Scream of the Butterfly ( ZDF / arte ).

His label Luxus Musik markets Gunias own sound carriers, but also those of other artists such as the Wolle Kriwanek Band or the guitar duo Morscheck & Burgmann .

Paul Vincent was married to the musician and author Mono Gunia, who had recorded an album with the band Drosselbart in 1970 under the name Jemima . He died unexpectedly on October 25, 2016 as a result of a serious heart attack.