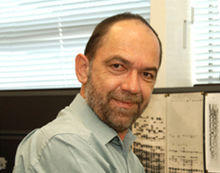 Alec John Jeffreys developed an early interest in science that was encouraged by his parents. At the age of eight he received his first chemistry set, and later a brass microscope. After graduating from high school, Jeffreys studied biochemistry at Oxford University . After completing his doctorate, he spent some time at the University of Amsterdam. From 1977 he worked at Leicester University .

On September 10, 1984, he discovered the genetic fingerprint of what he still considered his eureka designated-moment. He did research on mini satellites , hypervariable areas of DNA in the human genome. Even if he wasn't interested in developing a genetic fingerprint, but examined blood samples from different family members side by side for these mini satellites, he immediately recognized the range of his discovery. The image of the family members' mini satellites showed him that they can be assigned to each individual person like a barcode, but that family relationships can also be read off. Even today, every genetic fingerprint used to investigate the crime scene and every paternity test is based on the variation it discovered. In 1991, Jeffreys reported in the journal Nature about the first successful identification of a murder victim - a 15-year-old girl whose body was only found eight years after the crime. The first person convicted by this technique was the double killer Colin Pitchfork . Ever since this breakthrough, Jeffreys is still researching the variation in the human genome, and above all, how this variation comes about and is passed on from generation to generation.

His research results have helped Jeffreys receive numerous awards and prizes. He was in 1994 by Queen among others Elizabeth II. As a Knight Bachelor for beaten knight . Other awards include the William Allan Award (1992) and the Albert Einstein World Award of Science , which he received in 1996. In 2004 he was awarded the Royal Medal of the Royal Society and in 2014 the Copley Medal . In 2005 he received the Albert Lasker Award for Clinical Medical Research . He is also named by experts as a candidate for the Nobel Prize in Chemistry . In 2017 he was accepted into the Order of the Companions of Honor . He has been a member of the Academia Europaea since 1989 and of the National Academy of Sciences since 2005 .

Jeffreys is married with two grown daughters and two grandchildren. During the summer Jeffreys can often be found at his surfing cabin in Cornwall, England, where he is passionate about his hobby, surfing.