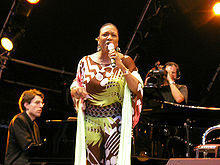 Dee Dee Bridgewater was born as Denise Garrett. Her mother and grandmother were already successful singers. Her father, who promoted her talent, was a music teacher and played as a trumpeter in the band of Dinah Washington . From 1966 Bridgewater appeared as a soul and jazz singer in various clubs in Michigan . In 1969 she was discovered by John Garvey , who took her on a tour of Russia. In that year she also met the trumpeter Cecil Bridgewater , whom she married soon after. When this received an engagement from Horace Silver , she moved with him to New York City . Bridgewater sang from 1971 for four years as lead singer with the Thad Jones - Mel Lewis band. In 1973 she sang the lead vocals for Coffy Baby on the soundtrack for the Blaxploitation classic Coffy , for which Roy Ayers was responsible .

From 1974 to 1976 she played on Broadway in the musical The Wiz . For her role as Glinda she received the musical prize Tony Award in 1975 and a Grammy for the soundtrack to the musical the following year . In 1974 her debut album Afro Blue was released . In the 1970s she performed with many jazz greats such as Sonny Rollins , Dexter Gordon , Dizzy Gillespie , Clark Terry and Ray Charles . In 1986 she left the United States and went to Paris , where she lived for the next fifteen years and met her second husband. Today she lives near Las Vegas . Her successful career as a jazz singer in Europe began with the album Live in Paris (1987). She performed at the most important jazz festivals. She is now one of the best jazz singers of her generation. Her CD Dear Ella as a tribute to Ella Fitzgerald won a Grammy in 1997. Bridgewater was successful as an actor in the play Lady Day , in which she played Billie Holiday , and in Cabaret . Bridgewater has been committed to fighting world hunger as the FAO's UN ambassador since 1999 . Her daughter is the jazz singer China Moses .

Her Billie Holiday tribute album Eleanora Fagan (1915–1959): To Billie with Love from Dee Dee was awarded the 2011 Grammy for Best Jazz Vocal Album . In 2012 she received the Edison Jazz Award for her oeuvre , and in 2019 the German Jazz Trophy .

Love And Peace: A Tribute to Horace Silver