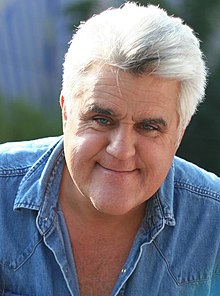 Leno, son of a Scottish mother and an Italian father, began his career in small New York comedy clubs is where he joined as a standup tried -Komiker. Since he sometimes performed eight to ten appearances per evening, television soon noticed him. He made several appearances on David Letterman ( Late Night with David Letterman ) and Johnny Carson ( The Tonight Show ) and was soon so popular with viewers that NBC decided to make him Carson's successor. Since leaving in 1992, Leno has hosted The Tonight Show, the world's oldest existing late night show .

In 1989 he played in the American action comedy by Lewis Teague with the title Detroit City - A Crazy Job (original title: Collision Course ) the police investigator Tony Costas.

In March 2013 it was announced that Leno would be replaced by Jimmy Fallon after his contract expired in February 2014 . His last show was on NBC on February 6, 2014. In the same year he was awarded the Mark Twain Prize for his humorous work.

Leno had two guest appearances as a car fanatic in the television series Listen, Who Hammers as well as a recurring role as an automotive mechatronics technician in some episodes of the series Last Man Standing .

Jay Leno at the 1993 Emmy Awards in his Hispano-Suiza

Leno is also known internationally as a collector of classic cars , current sports cars and motorcycles . His collection includes 169 cars and 117 motorcycles (as of 2014) . He writes his own columns on the subject, including in the American magazine Popular Mechanics . He also runs a website and a YouTube channel called Jay Leno's Garage , on which he publishes videos in which he presents his vehicles, explains technical facts and - if known - tells the story of the respective vehicle. The web series for NBC.com soon made it onto television (CNBC) and (as of 2019) more than 50 episodes were broadcast, which have now also been broadcast in other countries.

The motorcycle company Orange County Choppers built a bike for him, based on the Brough Superior from 1939. The manufacturing process was accompanied for the TV series American Chopper and broadcast in two parts on the Discovery Channel under the title Leno Bike . Leno also posed with the motorcycle on the cover of Hot Bike Magazine .