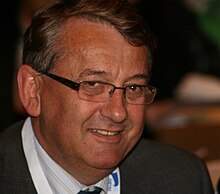 Per-Kristian Foss (born July 19, 1950 in Oslo ) is a Norwegian conservative politician of the Høyre party . From 2001 to 2005 he was Norwegian Finance Minister in the cabinet of Kjell Magne Bondevik .

Foss studied Political Science, Law and Criminology and graduated in 1977. Between 1973 and 1977 he was chairman of the youth organization Unge Høyre . In 1981 he first moved into the Norwegian Parliament, the Storting . There he was a member until 2013 and he represented the constituency. During his time as minister, however, he was replaced by party colleagues. From 1989 to 1993 he was the chairman of the finance committee. Between October 2009 and September 2013 he was a Vice-President of Parliament.

On October 19, 2001, he was appointed Minister of Finance in the Bondevik II government. He held the post until the end of the government on October 17, 2005. In 2005 he was awarded the Saint Olav Order .

Since 2014 he has been the head of the Riksrevisjonen .

In 2002 Foss married his partner Jan Erik Knarbakk , managing director of Schibsted-Verlag, a subsidiary of the Norwegian media group Schibsted .