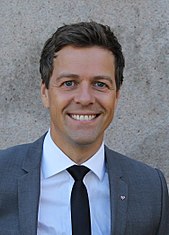 Knut Arild Hareide (born November 23, 1972 in Bømlo , Norway) is a Norwegian politician of the Christian People's Party (KrF), of which he was party leader from 2011 to early 2019. Between June 2004 and October 2005 he was the environment minister of his country and since January 2020 he has been the transport minister in the Solberg government .

Hareide attended the Norwegian Business School in Bergen from 1992 to 1997 and studied economics and sociology. He then started working for the Schibsted media group until 1998 . There he returned again for the periods 2001 to 2001 and 2005 to 2009, in which he did not hold any political offices.

Between 1991 and 1995, Hareide was a member of the local parliament in his home municipality of Bømlo. From August 1998 to March 2000 he worked as a political advisor in the Ministry of Churches, Education and Research. In October 2001 Knut Arild Hareide became State Secretary in the Ministry of Finance, which he remained until August 2003. On June 18, 2004, he was appointed Minister of the Environment. He held this office until the end of the Bondevik II government on October 17, 2005.

Member of Parliament in Storting

In the period from 1997 onwards, Hareide missed three times to move into the Norwegian parliament in Storting for the former Hordaland province . In the 2009 election he ran in the former Fylke Akershus and Hareide became a member of Storting for the first time. He ran again for Hordaland for the 2013 parliamentary election and has since represented the constituency of Hordaland. In his first legislative period, he chaired the Committee on Transport and Communication from 2009 to 2013. Between November 2011 and March 2012 he was also chairman of the special committee to deal with the attacks of July 22, 2011 . He has been a member of the KrF parliamentary group since June 2011 and was chairman of the parliamentary group from October 2013 to January 2019.

In April 2011, after Dagfinn Høybråten had resigned, he was elected as the new party leader of the KrF. From 2003 to 2007 he was deputy chairman of his party. He had given up his post voluntarily in 2007 in order to withdraw from politics. In the 2013 parliamentary elections, he advocated an end to the Stoltenberg II government and the KrF subsequently supported a bourgeois government under Erna Solberg . After the 2017 election , when the Hareides party had its worst results since the end of World War II, they eased support a little.

In autumn 2018, Hareide, as party chairman, campaigned for the KrF to change direction. Instead of continuing to support the bourgeois minority government of Solberg , he recommended that the party seek cooperation with the Social Democrats and the Center Party . A party congress voted against this line on November 2, 2018. After the conclusion of the coalition negotiations with the Conservative government, which were then led by his party colleagues, Hareide resigned from his position as party chairman in January 2019. In September 2019, he regretted his party's decision in an interview and stated that it was still possible to form a left-wing government.

In October 2019 he announced that he did not want to run again for a seat in Storting in the 2021 election . Hareide said that he would withdraw from state politics after the election, but that he wanted to remain active in the party. After the FrP withdrew from the Solberg government and the KrF was awarded a further ministerial post, he was introduced as the new Norwegian Minister of Transport on January 24, 2020. Hareide took over the office of FrP politician Jon Georg Dale . The FrP boss Siv Jensen criticized this decision because the appointment of a politician who only recently fought against the government does not constitute an invitation to the FrP to cooperate. However, since the government does not have a majority in parliament, such cooperation might be necessary.

Politically, Hareide is located either in the center or in the left wing of his party. While he largely takes the positions of his party in family and social policy matters, he also advocated a modernization of the KrF. In 2013, for example, he voted for the end of the obligation that KrF members must profess Christianity.

In 2016, following the Orlando attack, his participation in the Oslo Pride parade sparked controversial discussions. People from the political left in particular praised his decision. Inside the party, however, his participation met with criticism and led to several party withdrawals. When his party colleague Geir Jørgen Bekkevold married a lesbian couple as a pastor in 2018 and this met with criticism from party members, he supported Bekkevold. At the same time, however, he also emphasized the marriage between women and men as a "stable framework for children to grow up".

Hareide spoke out against a law that would allow pregnant women to have an abortion after the twelfth week if there is a high risk that the child will have a serious illness. However, he said before the internal party vote on whether or not the party should join a left government that he would not necessarily see the removal of this paragraph as crucial in a coalition negotiation.

In his book Det som betyr noe , published in 2018, Hareide wrote that economic liberalism and closed borders are incompatible with his party's values. In March 2019, at a Christian gathering, he condemned the fact that many Christians support populist ideas. He was then booed by parts of the audience.

Hareide has been married since 2012 and has three children.