General election in Norway in 2021

The parliamentary elections in Norway 2021 ( Norwegian Bokmål : Stortingsvalget 2021 , nynorsk : Stortingsvalet 2021 ) took place on September 13, 2021. 169 members from 19 constituencies were elected for the Norwegian national parliament in Storting . The elected parliament will meet on October 1, 2021, and the opening ceremony will take place on October 11, 2021. Due to the nationwide regional reform, the constituencies are no longer congruent with the provinces ( Fylker ), unlike in the previous elections .

The Solberg government is currently in power as a minority government after the Fremskrittspartiet (FrP) left the government in January 2020 .

→ Main article : “Awarding a mandate” in the Storting article

The 169 members of the Storting will be elected for the 2021–2025 legislative period. The 19 constituencies will be carried over from the previous parliamentary elections. For the first time, however, the constituencies used are no longer congruent with the Fylkern , i.e. the Norwegian provinces. The reason for this is the regional reform carried out from 2018 to 2020 , in which several Fylker were merged. The Storting decided in June 2018 that the constituencies should be retained. Only in the case of individual municipalities, which were changed as part of the municipal reform , there were changes in district membership. This case applies, for example, to the municipality of Lunner , which belonged to Oppland until the end of 2019 , but, in contrast to the other municipalities of Oppland, did not move into the new Fylke Innlandet , but into the also new Fylke Viken . Lunner subsequently went to the Akershus constituency .

The number of parliamentary seats per constituency is calculated based on the area and population of each constituency. This calculation is from the local Ministry redone every eight years and is due for election in 2021 on the values from 1 January 2020. Compared to the election in 2017 the distribution of seats something falls out different because it mainly in Akershus and Oslo was a major population increase. In each constituency, all but one of the seats are determined on the basis of the local election results. The remaining seat serves as a compensation mandate , which should guarantee an approximately proportional representation nationwide. Compensation mandates are only given to parties that receive at least four percent of the vote nationwide. Parties that are not taken into account in the compensation mandates because they achieve values ​​below the 4 percent threshold can still move into the Storting via the mandates won in the constituencies.

If a person runs in several constituencies at the same time and is elected in more than one, they can choose which constituency they represent. Smaller parties in particular, including parliamentary parties such as Kristelig Folkeparti and Venstre , decided to run in different constituencies with the same lists. Occasionally people ran for candidates within the party for different constituencies, although the party there was on different electoral lists. For example, FrP politician Jon Helgheim ran in Oslo after he had previously lost a fight vote in Buskerud . 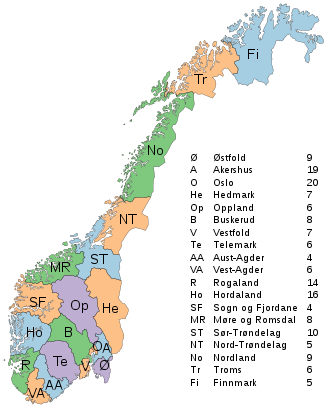 Constituencies 2021 with number of mandates

On March 6, 2020 it was announced that the election would be scheduled for Monday, September 13, 2021. The individual local parliaments themselves were allowed to decide whether they could also vote on September 12, 2021, i.e. on Sunday. 159 of the 356 Norwegian municipalities chose to have two election days. From August 10 to September 10, 2021, early voting was also possible in all municipalities . The elections in Norway take place on Mondays, and the law also requires September as an election month. In contrast to many other countries, Norway does not provide for early elections in the Basic Law . Neither the government nor the parliament can order such.

The sampling also takes place in parallel to the storting election. The Norwegian Sami registered in the Sametingets valgmanntall are allowed to vote for the 39 MPs for the Sameting .

The municipalities are required to count the votes cast twice. The first count must be done manually, the second can be done automatically. 189 of the 356 municipalities stated that they carried out a second machine count.

In the 2017 parliamentary elections, the Social Democratic Workers' Party (Ap) emerged as the largest parliamentary group. Members of the Arbeiderpartiet, the conservative Høyre (H), the right-wing Fremskrittspartiet (FrP), the Senterpartiet (Sp), the socialist Sosialistisk Venstreparti (SV), the liberal Venstre (V), the Christian Democratic Kristelig Folkeparti (KrF) moved into parliament , the green Miljøpartiet De Grønne (MDG) and the Rødt (R) party . The parties MDG and Rødt each received only one mandate. Parliament's president was Høyre politician Olemic Thommessen , who resigned in March 2018 and was replaced by his party colleague Tone Wilhelmsen Trøen .

Some Storting members of the 2017–2021 legislative period announced that they did not want to run for a seat in parliament again. Among the better-known of these are Defense Minister Frank Bakke-Jensen , former Venstre Chair and Minister Trine Skei Grande , Transport Minister and former KrF Chair Knut Arild Hareide , Health Minister Bent Høie , former Minister Trond Giske as well as the former Finance Minister and FrP- Chairwoman Siv Jensen .

From the parliamentary elections on September 9, 2013 , the Solberg bourgeois government emerged on October 13, 2013 . It was initially a minority government of the conservative Høyre and the right-wing Fremskrittspartiet (FrP). The government was therefore mostly dependent on the votes of the Christian Democratic Kristelig Folkeparti (KrF) or the social liberal Venstre . Following the election in September 2017, the Venstre party began coalition negotiations with the Solberg government, and in January 2018 the new minority government with the participation of Venstre politicians was presented.

This new minority government was supported by the KrF in Storting, since, in contrast to the time of the 2017 election, the support of the Venstre party alone was no longer sufficient. In November 2018, the KrF held a vote on the future direction of the party. The then KrF chairman Knut Arild Hareide spoke out in favor of a left-wing government under Arbeiderpartiet politician Jonas Gahr Støre . Hareide lost the vote, his party colleague Kjell Ingolf Ropstad started negotiations with the government and later became the new KrF chairman. In January 2019, the new government team was finally presented, with the government now having a majority in parliament for the first time.

The Senterpartiet was one of the winners in the state-wide local and fylkesting elections in September 2019 . The governing parties and the Arbeiderpartiet, however, had to accept a loss of votes. In January 2020, the FrP finally announced its exit from the Solberg government after a dispute over the repatriation of a suspected IS supporter. On January 24th the new cabinet was presented and a minority government was formed again with the participation of Høyre, Venstre and KrF.

The electoral lists had to be submitted by the parties by March 31, 2021, and the state had to decide by June 1, 2021 whether the submissions comply with electoral laws. A total of 361 lists were approved by 25 parties in the 19 districts. 5174 candidates were listed on the lists, but due to multiple listing, there were only 4152 people behind them. Behind the 5174 list places were 2052 women and 3117 men. The lists were topped in 241 cases by men and in 120 cases by women. The mean age was calculated to be 50 for men and 46 for women. The following parties ran in all constituencies, some of which made the same list in several constituencies:

The following parties are running in individual constituencies:

Party leaders of the parliamentary parties

Electoral lists of the parliamentary parties

The Høyre party ran in all constituencies with different party lists. The Prime Minister and party leader Erna Solberg was elected to first place on the Høyre electoral list in Hordaland.

The Fremskrittspartiet competed in all constituencies with different party lists. Party leader Sylvi Listhaug , who was elected to succeed Siv Jensen in May 2021 , was elected to first place on the FrP electoral list in Møre og Romsdal.

The Senterpartiet appeared in all constituencies except Vest- and Aust-Agder with different party lists. The party leader Trygve Slagsvold Vedum was elected to first place on the Senterpartiet electoral list in Hedmark.

The Sosialistisk Venstreparti (SV) ran in all constituencies with different electoral lists. The party chairman Audun Lysbakken was elected to first place on the SV electoral list in Hordaland.

The Venstre party did not run in all constituencies with different party lists. The party leader Guri Melby was elected to first place on the Venstre electoral list in Oslo.

The Kristelig Folkeparti (KrF) did not run in all constituencies with different party lists. The party chairman Kjell Ingolf Ropstad, for example, was elected to the top of the KrF electoral lists in Vest-Agder and Aust-Agder.

Miljøpartiet De Grønne (MDG) did not run in all constituencies with different party lists. The party leader Une Aina Bastholm was elected to first place on the MDG electoral list in Akershus. In the 2017 election, Bastholm moved into the Storting for Oslo.

The Rødt party ran in all constituencies with different party lists. The party leader Bjørnar Moxnes was elected to first place on the Rødt electoral list in Oslo.

The plans to hold discussions between the three party chairmen, Solberg, Støre and Vedum, who were considered candidates for state ministers, led to criticism. Because of the government cooperation sought by the Arbeiderpartiet and Senterpartiet, this was sometimes perceived as "2 against 1".

According to the preliminary counts, the parties Arbeiderpartiet , Høyre , Senterpartiet , Fremskrittspartiet , Sosialistisk Venstreparti , Rødt and Venstre each achieved over four percent. This means that they can also receive compensation mandates. According to the preliminary results, the two parties Miljøpartiet De Grønne (MDG) and Kristelig Folkeparti (KrF) fall just under the four percent . Both parties would thus be excluded from compensation mandates, but would still have won mandates. Far below the four percent the party falls Pasientfokus made solely in the most sparsely populated constituency Finnmark came into office, but there was the preliminary results show that achieve a mandate.

Surveys averaged over monthly survey results, from the 2017 election to September 2021

Elections and voting in Norway