Referendum in Norway in 1994

On November 27th and 28th, 1994, a referendum took place in Norway on the country's accession to the European Union . With a turnout of 88.6 percent, 52.2 percent of those who voted refused to join the EU.

After the establishment of the European Economic Community in 1957, there was a clear and sustained economic upswing in all EEC member states. For many of the neighboring states of the EEC, which initially only consisted of France, the West German Federal Republic, Italy and the Benelux countries, joining this economic union seemed desirable. As a member of NATO, Norway was politically closely linked to the states of the EEC and made two attempts in 1962 and again in 1967 to apply for membership in the EEC. However, both were blocked at the instigation of French President Charles de Gaulle , who in particular did not want the United Kingdom to join the EEC. After de Gaulle resigned, the way to Europe seemed clear and Norway applied for membership again in 1970. Although the motion was apparently supported by most social groups, it was rejected by the population in a referendum on September 24th and 25th, 1972 with a majority of 53.5 percent of the voters. The outcome of the referendum led to a government crisis and the resignation of the government under Prime Minister Trygve Bratteli , which had favored accession. The project of joining the EEC was initially shelved .

Twenty years later, the political landscape in Europe had fundamentally changed. The Soviet Union disintegrated between 1989 and 1991, German reunification took place in 1990 and the East-West conflict , which had determined European politics for decades, seemed to have ended permanently. The European Union , as the union of states has called itself since the Maastricht Treaty in 1992, continued to appear attractive as an anchor of stability in a time of upheaval and as a zone of economic prosperity.

However, since the last EU referendum there has also been an important economic policy change in Norway. In the 1960s , 1970s and 1980s more and more oil and natural gas fields were discovered in the North Sea , in which Norway played a significant part through the division of the North Sea into exclusive economic zones . As a result of the 1973 oil crisis , oil prices climbed to unprecedented levels, so that Norway, whose economy had previously been largely determined by fishing and small industries, advanced to become an oil exporter and one of the richest countries in the world by gross domestic product . Due to the wealth of natural resources, joining the EU appeared to be less of an economic necessity than in the previous decades. Political considerations became all the more important. Those in favor of joining the EU argued that otherwise Norway would become increasingly marginalized and isolated in Europe.

Norway's application for EU membership in 1992

On November 25, 1992, the Prime Minister of Norway, Gro Harlem Brundtland, submitted Norway's official application to join the EU to the Council of the European Communities . Norway thus followed the example of Austria, Sweden and Finland, which had recently submitted similar applications. On December 7, 1992, the Council decided to start an admission procedure. In a statement by the European Commission , the fields of agricultural policy, fisheries and state monopolies such as the alcohol monopoly were named as problematic areas . Norway will have to adapt to European conditions there. The problems were judged to be solvable and the Commission's recommendation was to "start accession negotiations with Norway as soon as possible".

Accession was highly controversial in Norway. The discussions on the accession question centered on the possible consequences of accession for the Norwegian welfare state and environmental issues, as well as the question of the extent to which Norway would retain control over its natural resources (oil, natural gas, hydropower). As in 1972, fisheries policy became an important issue. Opinions varied within the Norwegian fishing industry. On the one hand, efforts were made to keep Norwegian waters free from the fishing fleets of other EU countries, on the other hand, those responsible in the fish processing industry were aware of the importance of the common market for the sale of Norwegian fish products. In a resolution of May 27, 1993, the European Parliament condemned Norway's decision to continue commercial whaling , which provoked negative reactions there. Norway's business associations were in favor of joining the EU, while the unions were largely skeptical of the EU. Most of the farmers' associations rejected EU membership because they were concerned about incompatibilities between EU agricultural policy and the situation in Norway.

Of the political parties in Norway, the bourgeois parties Kristelig Folkeparti , Venstre , Senterpartiet , as well as the left party Sosialistisk Venstreparti spoke out against EU membership, in favor of the Social Democrats ( Arbeiderpartiet ) and the Conservatives ( Høyre ). All political parties agreed to hold a referendum on the controversial question of membership.

Before the referendum in Norway, similar votes took place in Austria (June 12, 1994), Finland (October 16, 1994) and Sweden (November 13, 1994), with the majority of voters voting in favor of their countries joining . The closest result was in neighboring Sweden, where two weeks before the vote in Norway, 52% of voters voted “yes”.

The question that voters answered with “Yes” or “No” was:

" Should Norway become a member of the EU (European Union)? "

The following table shows the voting results by voting district: 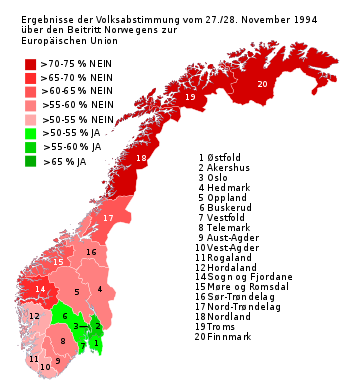 As a result, EU accession was rejected by the majority of those who voted. What was remarkable is the great similarity to the 1972 vote , also with regard to the regional distribution, with the percentage of those in favor of membership having increased slightly overall (from 46.5 to 47.8%). After 1994, the project for Norway to join the EU soon disappeared from the political agenda to this day. However, there was broad consensus among the responsible politicians in Norway that the country should come as close as necessary and possible to the EU. Norway is (in contrast to, for example, non-EU country Switzerland ) a member of the European Economic Area (EEA). The EEA was originally intended as a kind of transitional state for countries that wanted to join the EU in the foreseeable future and needed an adjustment period to harmonize with EU conditions. In the case of Norway, this “provisional” has developed into a longer-lasting condition. Since 1994, Norway has adopted a total of more than 5,000 EU laws and regulations. Norway participates in 35 different EU programs (in the fields of research, culture, development, etc.) (as of 2009) and has joined the Schengen Agreement . Norway also contributes to Community spending by the European Economic Area (between 2009 and 2014 a total of 1.79 billion euros). This quasi-integration of Norway into the EU without simultaneous membership took place without causing major protests in the country.