Referendum in France in 1972 to expand the European Economic Community 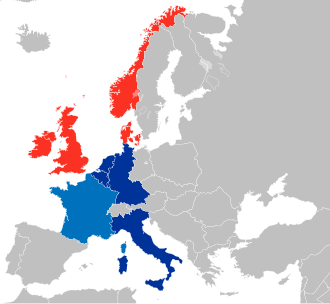 On April 23, 1972 , a referendum was held in France in 1972 to expand the European Economic Community . Voters were invited to give their opinion on the planned accession of the United Kingdom , Ireland , Denmark and Norway to the European Economic Community (the so-called northern enlargement ). 68.3 percent of those who voted approved the EEC expansion. The turnout was 60.2 percent.

Since the formal establishment of the EEC in 1957, it has proven to be a successful model for economic policy and at the same time an anchor of stability in Europe. Other states then also aim to join the EEC. Two applications for membership by the United Kingdom in 1961 and 1967 were blocked by French President Charles de Gaulle with a veto. Formally, this was justified with incompatibilities in economic policy. The main reason, however, lay in the fact that the UK's EEC membership contradicted de Gaulle's conception of a de facto French-led “core Europe” (a Europe européenne as opposed to an Anglo-American dominated Europe atlantique ). After de Gaulle's resignation in 1969, Georges Pompidou was his successor. Pompidou was no longer fundamentally opposed to the UK's accession to the EEC. The EEC's accession negotiations with the United Kingdom, Denmark, Norway and Ireland have resumed. At a press conference on March 16, 1972, President Pompidou announced the holding of a referendum in which French voters would decide whether to approve the EEC enlargement.

Of the major parties, the French Communist Party under Georges Marchais recommended a “no” from the opposition parties , the socialists under François Mitterrand an abstention, the centrists under Jean Lecanuet and the left-liberal Parti radical under Jean-Jacques Servan-Schreiber a “yes”. The ruling Gaullists ( Union des Démocrates pour la République and independent republicans) recommend a “yes” vote. Opinion polls before the referendum found that around two-thirds of those questioned saw the referendum as a decision on an important issue, but that a narrow majority saw the referendum as a primarily domestic issue, with President Pompidou looking to strengthen his political position went. The opponents of the EEC expansion argued above all that an expansion of the EEC would primarily serve the interests of the large business enterprises and would ultimately lead to a deterioration in the living conditions of the common population. In addition, the admission of the United Kingdom, with its special relationship with the United States , made the EEC increasingly dependent on the USA. The polls showed, however, that even Communist Party voters disagreed with the majority of these analyzes. Furthermore, 67% of the respondents thought that the common market was basically a good thing for France, while only 8% thought the opposite.

Over time, the opinion polls showed that the camp of “no” supporters steadily increased the closer the voting date came. Whereas in mid-March 1972 the “no” proponents were still around 10%, a few days before the date it was almost 30%.

The question asked during the referendum, which had to be answered with Oui / Non (Yes / No), was:

"Against the background of the new perspectives that are opening up for Europe, do you agree to the bill that the President of the Republic has presented to the French people, which envisages the accession of Great Britain, Denmark, Ireland and Norway to the European Communities?"

- Question of the referendum of April 23, 1972 : Conseil constitutionnel

In a survey on April 10, 1972, more than 50% of those questioned stated that they either found the question not clear (“La question ne paraît pas claire”) or even incomprehensible (“Ne connaît pas le texte”).

Majorities based on departments and overseas possessions

After the approval of the French voters, the way to the expansion of the European Economic Community was free. The United Kingdom, Denmark and Ireland joined the EEC on January 1, 1973. However, in a referendum on September 24th and 25th, 1972, the Norwegians by a majority rejected their country's planned entry into the EEC, so that this did not take place.