Catholic Parish Church of the Holy Trinity in Rust 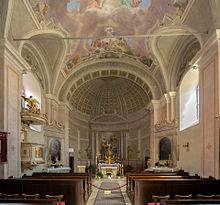 The interior of the parish church with the painted apse

The Roman Catholic parish church Rust am See is at the east end of Kirchengasse in the statutory town of Rust on Lake Neusiedl in Burgenland . The parish church consecrated to the Holy Trinity belongs to the dean's office in Rust in the Diocese of Eisenstadt . The church is a listed building .

The church was built by the evangelical citizens with the master builder Ulrich Meyer from Zurich, the foundation stone was laid in 1649, the consecration took place in 1651. In 1674 the church building was violently taken away from the evangelical community and in 1680 it was re-consecrated. In 1976 the exterior was restored.

The simple early baroque church building with a three-eighth closure has a high west tower. A school building is built on the north side at Kirchengasse 16. The basement of the square tower appears to have been broadened by the choir staircase with a console core attached to the north and the round stairwell attached to the south. Above a small flight of stairs is the west portal with an explosive gable above columns, in the top there is an inscription with the names of the builders. At the height of the facade gable is a walkway with a stone balustrade on consoles. And it is remarkable that at the foot of the stone pyramid helmet of the tower there is a second passage with a view of the city of Rust. The exterior of the parish church is simple.

The high altar shows the high altar painting Trinity in the painted mock architecture of the apse, painted by Franz Sigrist (1798), according to the inscription renovated and largely repainted by Joannes Kraus in 1881 . The rococo tabernacle on a free-standing canteen was created by the sculptor J. Georg Schweizer (1774) with the gilder Andreas Sedlmayer from Ödenburg. The side altar paintings show St. Joseph and on the right St. King Stephan, also by Franz Sigrist.

The organ dates from 1783 and was created by Petrus Beking . It has nine registers on a manual with a broken octave and a pedal with a short octave . It has purely mechanical slide chests . The disposition is: