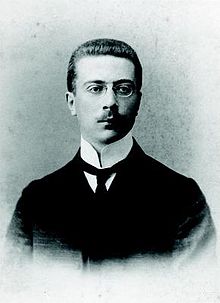 Ernst Hellinger studied mathematics at the universities of Heidelberg , Breslau and Göttingen with David Hilbert . He became friends with Max Born during his studies . In his doctoral thesis from 1907 he developed a new type of integral , the so-called Hellinger integral . He later developed the Hilbert-Hellinger theory together with Hilbert . In 1914 he became a professor in Frankfurt. In 1914, in the field of theoretical mechanics , Hellinger contributed significantly to the formulation of the canonical principle of variation, which half a century later would play a major role in the development of the finite element method .

In 1936, as a Jew, he was forced into retirement by the National Socialists . Even after the Reichspogromnacht in 1938 he refused to flee and was arrested on November 13th and deported to the Dachau concentration camp . Following the intercession of influential friends, he was released from the concentration camp after six weeks on condition that he would emigrate. In February 1939 Hellinger traveled to the USA .