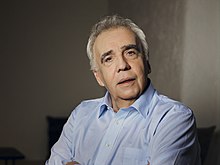 Johannes Voggenhuber (born June 5, 1950 in the city ​​of Salzburg ) is an Austrian politician ( Greens , now ), author and publicist. From 1990 to 1996 he was a member of the Greens to the Austrian National Council and from 1995 to 2009 a Green member of the European Parliament . He ran for Initiative 1 Europe with the support of the NR - parliamentary group now unsuccessfully in the European elections in Austria 2019 and then ended his political career.

Voggenhuber worked as an insurance clerk and from 1977 to 1982 spokesman for the United Citizens' Initiative Salzburg / Citizens' List and their parish group in the Salzburg Citizens' List. From 1982 to 1987 he was the city councilor of Salzburg responsible for urban planning, old town renovation, traffic, environment, construction and commerce. From 1984 to 1986 he was chairman of the Hainburg Unification Committee for the merger of the Greens and Alternatives, VGÖ and a joint candidacy for the National Council. From 1988 to 1991 he was federal manager of the Green Alternative and from November 5, 1990 to March 13, 1996 a member of the Austrian National Council . From 1990 to 1992 he was also chairman of the Greens in the National Council .

Federal spokesman for the Greens