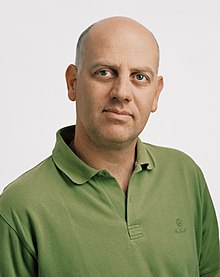 From 1991 to 1996 canon was the first non-executive city council of the Greens in Vienna. From March 1996 to December 1997 he was federal spokesman for the Greens and from 1997 to 2004 club chairman of the Vienna Greens . From 1997 to February 27, 2019, the canon was a local councilor and member of the state parliament in Vienna . In September 2019 he resigned from the party after the Federal Office for the Prevention and Fight against Corruption started investigations against him on the basis of an anonymous complaint.

Canon studied economics with a focus on environmental economics at the Vienna University of Economics and Business , where he has also been teaching since 1987. He is the founder and was a board member of the association "S²arch - Social Sustainable Architecture", which runs development projects in South Africa . In 2000, Chorherr helped found the private learning center Walz in Vienna, which has been recognized as a school with public rights since 2002 . In 2008 he founded the Ithuba Skills College in South Africa , a school in a township southeast of Johannesburg.

In October 2017, it became known through publications by the daily newspaper Kurier that Chorherrs Verein received some very high donations from real estate investors. Payments by a former manager of the London hedge fund Lawnsdowne (EUR 300,000), Signa Holding GmbH and a financial consultancy (EUR 100,000 each), in which Michael Tojner , investor in the controversial high-rise project " Heumarkt neu ", was a minority shareholder at the time , were highlighted. A complaint was brought against the canon with the economic and corruption prosecutor's office for abuse of office and forbidden acceptance of gifts. Canon has also announced lawsuits against the spread of the corruption allegations, but these have not been brought in weeks. In February 2018 it was announced that Canon has resigned from all his functions in the s2arch association . In March 2019, the Vienna City Audit Office determined that the funding for the canons' association s2arch in the amount of EUR 50,000 per year was not based on the internal requirements for non-governmental organizations, but rather without a call for proposals as a 'special project'. The association received this funding for eight years without sufficient evidence of its services, as the responsible MA27 had received the instruction to urge missing documents only once and then to accept the missing without sanction. A review of the travel expenses was also not possible due to the lack of documents.

In June 2019 Chorherr announced a cooperation with the real estate entrepreneur Erwin Soravia.

In September 2019 it became known that the Public Prosecutor's Office for Economic Affairs and Corruption (WKStA) inspected files of MA 21 in connection with the investigations against Canon and seven other people on suspicion of abuse of office, corruption and bribery .

At the end of 2019, Chorherr and Helmut Gragger opened an organic wood-fired bakery in the Nordbahnviertel in Vienna.

His father was the long - time editor -in- chief of the Austrian daily newspaper Die Presse , Thomas Chorherr .

Christoph Chorherr is a lieutenant in the militia of the Austrian Armed Forces .

From 1997 onwards, canon was a local councilor and member of the state parliament in Vienna . Since the 2001 state elections, from which the Social Democrats emerged with an absolute majority, Chorherr has negotiated and partially implemented over 50 red-green projects with them. These include a biomass power plant and passive house settlements .

From the municipal council elections in 2010 , after which the Greens formed the first red-green state government with the SPÖ , canon was deputy chairman of the council committee for housing, housing and urban renewal and a member of the council committee for urban development, transport, climate protection, energy planning and citizen participation. He was also the spokesman for urban planning for the Vienna Green Party.

In the Viennese municipal council elections in autumn 2005, Chorherr achieved the largest number of preferential votes of all non-top candidates, which, in addition to discussion events, is due to the popularity of his weblog and was also seen as a vote for the Realo wing of the Vienna Greens.

On February 27, 2019, he resigned from his state parliament and municipal council mandate, and Ursula Berner took his place . In September 2019, Chorherr resigned his membership of the Greens because of the donation allegations.

Christoph Chorherr is still active as a speaker at political events such as the municipal summer talks.

Federal spokesman for the Greens