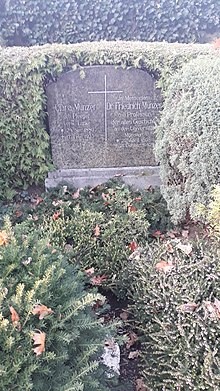 The grave of Friedrich Münzer and his second wife Clara in the Münster Central Cemetery .

Friedrich Münzer (born April 22, 1868 in Opole ( Upper Silesia ), † October 20, 1942 in Theresienstadt ) was a German classical philologist who is known for the development of prosopography , especially for demonstrating how family relationships in the Roman Empire with were connected to the political struggles.

Münzer came from a Jewish merchant family, went to the University of Leipzig to study and in 1887 to the University of Berlin , where he wrote his dissertation De Gente Valeria under the supervision of Otto Hirschfeld . Opponents were Bogdan Krieger , Walter Henze and Ernst Kornemann . In 1893 he went to Rome , where Georg Wissowa won him over to write biographical articles for Pauly-Wissowa . From Rome he traveled on to Athens , where he took part in excavations on the Acropolis . Here he met Clara Engels, whom he married two years later on September 4, 1897.

In the meantime (1896) Münzer had been appointed unpaid lecturer at the University of Basel , so that he and Clara had to live on the support of their parents and his biographical articles. In 1902 he was given the second chair for classical philology in Basel. In 1912 he accepted a call to Königsberg , where he became a German civil servant.

Clara died on December 15, 1918 during the flu - pandemic ( Spanish flu ). In 1921 Münzer accepted a chair at the University of Münster . His most important work, Roman Noble Parties and Noble Families , was published in 1920 and brought him fame for the first time in his life. In 1923 he became dean , in 1924 he married the widow Clara Lunke, née Ploeger, and thereby became the stepfather of two teenage children.

Münzer was generally apolitical, but politics began to take an interest in him in 1933 when communists, “non-Aryans” and opponents of the NSDAP were removed from the public service. Civil servants prior to 1914 were officially released, but his biographers provide evidence of his continued employment at the request of influential colleagues and former students. In January 1935, a new law called for the removal of all lecturers and professors older than 65 years (making room for Nazi sympathizers). Münzer retired on July 23, 1935.

His second wife died in 1935. On November 14th of the same year he was officially classified as a Jew, whereupon many colleagues and acquaintances distanced themselves from him. Nevertheless, he continued to work on the biographies for Pauly-Wissowa, and they were also accepted there, contrary to the law that forbade Jews from any journalistic work. In 1938 another law forced him to adopt a Jewish surname, so that from now on he was officially referred to as "the Jew Friedrich Israel Münzer". In a letter to the ancient historian Ronald Syme on December 12, 1938, he wrote that the changed situation depressed him deeply, but that he saw his situation as significantly better than that of many others.

Despite urging some friends, he refused to emigrate. In July 1942 he was taken to the Theresienstadt concentration camp by the Gestapo . His adoptive daughter Margarete managed to obtain some privileges for him, such as writing and receiving letters and getting his suitcase undamaged. Eventually she even managed to get him released from the concentration camp, but an enteritis epidemic (inflammation of the intestinal wall) had broken out in the camp, to which he succumbed on the same day that Margarete received the news that her father was to be released.

His letter copy book, in which his letters from 1906 to 1914 are copied, is in the university archive of the Westphalian Wilhelms University of Münster .

Münzer's greatest achievements include his more than 4000 prosopographical articles for Pauly's Realencyclopadie of classical antiquity , which even today are not outdated in their completeness and are still used.

See also : List of Classical Philologists at the University of Basel

Professor of Ancient History at the Albertus University in Königsberg

Professors for Ancient History at the Westphalian Wilhelms University