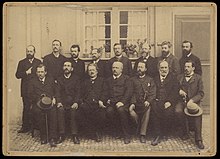 Mähly grew up as the son of a master cooper in Basel , he attended the humanistic high school , in 1845 he founded the Paedagogia Basiliensis , the oldest secondary school in Switzerland. He completed his studies in Classical Philology in Basel, Göttingen and Berlin with a doctorate in 1850, after which he taught at various secondary schools. From 1853 Mähly was a private lecturer and from 1864 an associate professor at the University of Basel , where he lectured alongside Friedrich Nietzsche . In 1875 he was appointed professor of Latin philology at the University of Basel. As a scientist and lecturer, he was considered unsystematic and superficial, "because of the sheer spirit, solidity was neglected". A larynx disease, which prevented him from speaking more and more, forced him to give up professorship and teaching in 1890. In the following years he still tried to supplement his meager retirement salary through an excessive journalistic activity.

Mähly was brilliant and versatile, he read and spoke Latin and Greek fluently and was a popular speaker and company. He wrote poetry in the High German language and dialect and has written a lot on historical and literary subjects. While most of his works are of a rather popular nature and he lacked self-criticism of his own poetry, he "distinguished himself from the literature of his age through acumen, vision and judgment."

Meyer's classic editions published the "History of Ancient Literature" he wrote. On the literature of antiquity, the works he wrote were published: "Antology of Greek and Roman Poets" and "Euripides - Selected Dramas".

See also : List of Classical Philologists at the University of Basel