This article deals with the late Roman local ruler Syagrius. For the consul of the same name in the 4th century see Flavius ​​Afranius Syagrius . 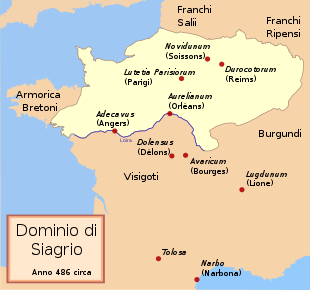 Assumed sphere of influence of Syagrius; the expansion is uncertain and in this form probably exaggerated.

Syagrius († approx. 486/87) was the last independent " Roman " ruler in Gaul . In 486/87 he was defeated by the Frankish military leader and rex Clovis I in the battle of Soissons and was later executed on his orders.

Syagrius possibly came from the prominent Gallo-Roman senatorial family of the Syagrii from Lugdunum . His father Aegidius had been magister militum per Gallias since 456/57 and thus commander in chief of the troops in Gaul . After his friend, Emperor Majorian , had been executed in 461 on the orders of the influential magister militum per Italiam Ricimer , Aegidius fell out with the Western Roman government in Ravenna in 462 . In 461/62 Agrippinus , a rival of Aegidius and now the new Gaulish army master, mobilized the Visigoths against Aegidius on behalf of Ricimer, who was able to defeat them in the same year at Orléans (presumably with the help of the Salfranken under Childeric I , but this must remain open). Nevertheless, Aegidius had to evade due to the existing pressure and established a special empire in the area north of the Loire up to the Somme .

Aegidius probably moved into Soisson's residence, where there were Roman armories ( fabricae ), but this is not certain. Rather, it is derived from the fact that Gregory of Tours (whose historiae are the main source for these events, and for Aegidius there are some additional information in other sources) reports that Aegidius once ruled this city, from where Syagrius around 486 prevailed. Since his rebellion, Aegidius has ruled as an independent Gallo-Roman ruler, although it is unclear how far his area of ​​influence actually extended, since the sources actually do not report anything about the so-called "Empire of Soissons". According to many researchers, he was on good terms with the Salfranken Childerich, even if this is sometimes doubted, and was considered to be the guardian of the Gallo-Roman culture in this area. According to researchers such as Patrick J. Geary and Guy Halsall, Aegidius relied on the remnants of the Roman army on the Rhine in northern Gaul and in this regard was less an ally than a rival of the Frankish-Roman general Childerich (see below).

Aegidius died in 464 or 465. It had become customary in Gaul since Arbogast that soldiers sometimes choose their commanders themselves , and so Syagrius succeeded his father and resided (this is considered certain) in Soissons. However, we are insufficiently informed about developments in the Gallo-Roman "Empire of Soissons". The sources mention the comes Paulus , who took action against Saxon looters a few years after the death of Aegidius (perhaps in alliance with the Salfranken), but fell in a battle near Angers . Gregor reports on this in his historical work, whereby he was apparently able to rely on a (now lost) contemporary report, the so-called Annals of Angers :

“Then Paul, the Roman commander, attacked the Goths with the Romans and Franks and made rich booty. But when Adovacrius [a leader of Saxon looters] came to Angers, King Childeric appeared the next day and, after Paul was killed, won the city. That day the church house went up in flames. "

It is often assumed in research that Paul acted on behalf of Syagrius or that Paul even acted as governor in Soissons in his place. But this is pure speculation, because from these descriptions it does not emerge whether Paul acted on behalf of someone else (in which case it could not be ruled out that he was active as a representative of the legitimate Western Roman government) or perhaps not acted on his own. All of this must ultimately remain open.

Syagrius first recognized the nominal sovereignty of the Eastern Roman emperors and the Western Roman emperors Anthemius (467 to 472) and Julius Nepos (474/75) appointed by them. Syagrius was able to benefit from the war against the Visigoths started by Anthemius in 470; With the support of the Salian Franks, the Goths were initially defeated at Bourges, but this was of little use to Emperor Anthemius, as the last regular Western Roman troops in southern Gaul were soon destroyed by Gothic troops. Syagrius was probably able to consolidate his sphere of influence in the meantime, but the development in his sphere of influence is again not in fact tangible for the next few years. There are some indications that after the deposition of Julius Nepos in 475 there was a rift with the Eastern Roman emperor, who now apparently formed an alliance with Syagrius' rival Childeric.

According to Gregory of Tours , Syagrius is said to have carried the title " Romanorum rex " ("King of the Romans"), but it is unclear whether he called himself that or whether it is a foreign name. While older research tended to distrust Gregor's message, more recently several researchers have tended to believe that Syagrius, when he could no longer rely on imperial legitimacy, had his men proclaimed an army king ( rex ) - he would have followed the example of the leaders of the foederati in Roman service. It is noteworthy that Syagrius did not have himself proclaimed emperor and thus, unlike rebellious Roman generals in the early 5th century, did not claim to rule in the empire, but rather limited himself to northern Gaul.

In 484 the powerful King of the Visigoths, Euric , died , who until then had been the politically decisive figure in Gaul; He was succeeded by his young son Alaric II. Relations between Syagrius and the Salfranken deteriorated at the latest with the death of Childerich in 481/82, when his son Clovis I came to power and his father as rex of the Franconian foederati and administrator of the Belgica secunda province replaced. However, it is quite possible that tensions between Aegidius / Syagrius and the Salfranken had already existed before. It is considered that both sides competed for years over who would be in command of the remnants of the Roman army in Gaul, which Aegidius had initially joined. In this sense, the collective term "Franks" used in the sources is sometimes to be understood as the Roman troops on the Loire, which were probably mainly recruited from federated Franks.

Whatever the relationship between Aegidius / Syagrius and Childerich / Chlodwig was, now it came to open war. Clovis was evidently anxious to use the weakness of the Visigoth Empire and to enlarge its sphere of influence at the expense of the Gallo-Romans , which sealed the fall of Syagrius. Gregor again reports on the following events (all later sources depend on him), albeit very briefly. In 486 or 487, Clovis undertook an attack on Syagrius in alliance with his relative Ragnachar , who was defeated in a battle . The surviving bucellarii of Syagrius were probably taken over by Clovis; a note by the Greek historian Prokopios of Caesarea also suggests that the remnants of the Roman border troops in northern Gaul also converted to the Franks. Clovis initially moved into his new residence in Soissons.

Syagrius himself fled to Alaric II in Toulouse in southern Gaul , which may be interpreted as an indication that Syagrius and the Visigoths had previously maintained good relations. Alaric finally delivered Syagrius to Clovis, on whose orders Syagrius was executed. It is uncertain whether Syagrius was handed over to Clovis shortly after his defeat or only a few years later. Clovis had considerable resources after his victory over Syagrius, but it is questionable whether he could have exerted sufficient pressure on the still much more powerful Visigothic empire. It is therefore possible that Syagrius was only handed over to Clovis a few years later, when Clovis had become a more dangerous opponent of the Visigoths.

In a source from the 7th century it is noted that with the death of Syagrius the Roman rule in Gaul ended. Regardless of the fate of Syagrius, the gens Syagria is documented until the 8th century and can therefore be regarded as an example of a Gallo-Roman senatorial family that has come to terms with the new political conditions despite all historical breaks.