The Archdiocese of Danzig ( Latin Archidioecesis Gedanensis , Polish Archidiecezja gdańska ) of the Roman Catholic Church in Poland comprises areas in northern Poland and extends from the mouth of the Vistula to Pomerania . 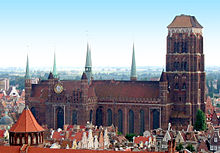 The Treaty of Versailles in 1920 resulted in major shifts in state borders in the Danzig area. West Prussia fell to the resurrected Polish state and Danzig , which was also separated from Germany, was given the status of a free state under the protection of the League of Nations as the Free City of Danzig . The Holy See took the new national borders into account by spinning off the Catholic parishes in the area of ​​the Free State of Danzig as the Apostolic Administration from the diocese of Culm , seat of Pelplin . In 1925 it was elevated to a diocese and placed directly under Rome. The Free State of Danzig wanted a local bishop. The first bishop, however, was Count Eduard O'Rourke . The aristocrat with Irish roots, who came from Belarus and had worked in the Baltic for many years, was nationally neutral, which, from Rome's perspective, should help keep the nationality dispute between Germans and Poles out of the church. This has only succeeded to a limited extent.

In May 1933, the National Socialists won the election for the Danzig People's Day and from then on had an absolute majority in parliament. Immediately afterwards they tried to put pressure on the Catholic Church and to restrict its rights. Many newly appointed Poles joined the Danzig Catholics because of the Treaty of Versailles . The Polish customs, the armed Polish post office in the city center, as well as the newly built naval port in Gdynia and the ammunition depot on the Westerplatte all brought the Polish military directly into the civilian trading town and the surrounding area. Thus, even the Catholics were divided, so that their resistance was weak from the start. Bishop O'Rourke himself was quite isolated, but there were also German-national Catholics who were close to the center , sympathizers of the Nazis and of course the Polish minority. In 1935 the second diocesan synod was held, at which, among other things, the establishment of Polish national parishes was controversially discussed. The bishop implemented his plan in this regard in 1937, which led to furious opposition from the Danzig Senate and many German Catholics. In 1938, O'Rourke surrendered to pressure and resigned from his bishopric. His successor was Carl Maria Splett after the Gdansk government rejected the Polish candidate for the Vatican, Franz Sawicki , and threatened his arrest.

On the first day of World War II , Catholic priests of German and Polish origin were captured in Gdansk. The younger ones were forced to build up the Stutthof concentration camp , the older ones did clean-up work on the destroyed Westerplatte . Conditions for the Catholic Church immediately deteriorated. First, the native-speaking chants and sermons (during the otherwise completely Latin rite of mass) were banned for the Polish minority in Gdansk. Then the Roman Catholic schools were nationalized. On orders from the Gestapo , Bishop Splett even had to forbid confession in Polish in 1941 .

In 1945 the area of ​​the Diocese of Danzig fell to Poland after the decisions of the Potsdam Agreement . Bishop Splett, who had not escaped, was arrested. In 1946, the Polish communists had the German bishop sentenced to a long prison term in a show trial for anti-Polish behavior. After eight years, however, he was able to leave for the Federal Republic. Until his death in 1964 there was only one Polish diocese administrator in Gdańsk, he himself remained - with the support of the Holy See - diocesan bishop, which led to tensions between Poland and the Vatican.

In the 1960s, the boundaries of the diocese of Danzig were adapted to the new pastoral requirements and its area was expanded far into the surrounding area at the expense of the diocese of Culm. In 1972 the first bishop of Polish origin since the diocese was founded was appointed. In the 19th century, powerful Polish bishops from Pomerania were often in office in Culm, which was previously responsible for Danzig. A fair in Kashubian was held for the first time in the mid-1980s . In 2007 there were regulars in around 20 parishes.

With the reorganization and restructuring of the Catholic Church in Poland through the Apostolic Constitution Totus Tuus Poloniae Populus , decreed on March 25, 1992 by Pope John Paul II , the Polish diocese of Danzig was elevated to the status of an archdiocese .

Martyrs of the Diocese of Danzig

Memorial plaque for the Gdańsk martyrs in the Marienkapelle Söder

Eleven clergymen from the diocese of Danzig fell victim to the National Socialist dictatorship between 1939 and 1944 and died a violent death. The pastors were Dean Johannes Aeltermann , Bruno Binnebesel , Ernst Karbaum , Bronisław Komorowski , Franciszek Rogaczewski , Bernhard von Wiecki and Robert Wohlfeil ; the vicars Walter Hoeft and Jerzy Majewski and the religious teachers Marian Górecki and Władysław Szymanski . Seven of them died in the Dachau , Sachsenhausen and Stutthof concentration camps . A plaque on the Marienkapelle in Söder near Hildesheim commemorates these eleven clergymen.