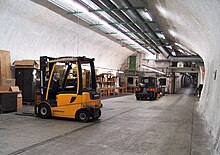 Receipt of goods in the main medical depot in Lorch-Rheingau

A depot is a military property for the storage of defense material .

The armed forces store important military equipment such as weapons , ammunition , vehicles , medical supplies and fuel in the depots .

Depots are military facilities that are usually surrounded by a military security area and are therefore protected against intrusion by structural measures and guarding . Depots for sensitive defense material ( artillery ammunition , explosives , special ammunition , etc.) are usually bunkered as protection against air attacks or sabotage . Other supply depots for commercial goods are built depending on the military situation, such as civil logistics centers . For security reasons, ammunition depots are usually set up away from towns and with a large distance between the storage rooms . Depots away from barracks are mostly set up in remote forest areas for security reasons. Some depots are partially buried and built as green earthworks for camouflage . Some depots are built underground, for example in old tunnels . To enable heavy military transports , depots are usually well connected to the civil or military transport infrastructure ; they often have close access to main or trunk roads , some have their own sidings or are close to ports and airports .

Depots are part of the logistics of the armed forces and, like civil warehouses, are used for short-term or long-term storage and handling of defense material. Depots, which are primarily used for training and exercise operations by the armed forces, are often designed for the short-term storage of ammunition and fuel. For safety reasons, they are often set up away from the barracks, but are often located near a military training area , a barracks, an ammunition plant or an on- site shooting range .

The operation of larger depots mostly serves to prepare for war . The present part of the armed forces (in the Federal Republic of Germany: field army ) uses depots in the advanced disposition areas or in the vicinity of the prepared artillery positions to establish rapid operational readiness . Ammunition, fuel and food for the first phase of the war are stored in the depots. The troops are supplied with supplies from the rear supply depots.

The mobile cinching the end of the armed forces (in the Federal Republic of Germany thus in the Cold War , especially the territorial army ) uses the most in the rear areas built depots to equip the convened reservists . These depots are often reporting heads and mobilization bases at the same time . The depots contain everything from personal equipment to large-scale equipment that is necessary for the formation of units . Since the material stored there is mostly intended for long-term storage, i.e., for example, the operating materials and batteries of motor vehicles are removed for preservation before storage, the operational readiness must often first be established.