The Jo Daviess County is a county in the US -amerikanischen State Illinois . In 2010 , the county had 22,678 residents and a population density of 14.6 people per square kilometer. The county seat is Galena .

The county in the extreme northwest of Illinois and borders to the west - separated by the Mississippi - on Iowa ; to the north is bordered by Wisconsin . It has an area of ​​1602 square kilometers, of which 46 square kilometers are water.

Jo Daviess County is located in the Ice Age-shaped region called the Driftless Area , which stretches across southeastern Minnesota , southwestern Wisconsin, northeastern Iowa, and far northwestern Illinois. During the last ice age, the so-called Wisconsin Glaciation , the region remained ice-free, so that the river valleys of the Galena River and the Apple River could cut deeper into the plateau during this time. 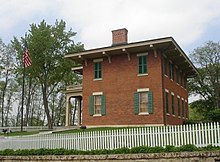 The House of Ulysses S. Grant in Galena, since 1966 in the NRHP listed 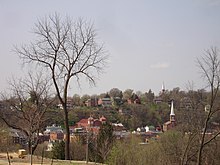 Center of Galena , listed in the NRHP since 1969

Jo Daviess County was formed on February 27, 1827 from parts of Putnam , Mercer and Henry Counties . The county was named after Joseph Hamilton Daviess (1774-1811), a lawyer and military officer from Kentucky , who was killed at the Battle of Tippecanoe .

As early as 1690, the French Nicholas Perrot built a trading post on the east bank of the Mississippi and traded with the Indians along the Fever River , now the Galena River , by buying the lead extracted from the mines and selling it on to the French. It was not until 1816 that the captain of the US Army, John Shaw , reported again on the lead-mining Indians on the Fever River. In 1818, JohnTyler Armstrong built a log cabin on the east bank of the Fever River. In 1819 Francis Bouthillier took over this log cabin and set up a ferry connection across the river. Over the next few months, over 100 men came to work in the lead mines along the river. In 1822 the government sold the first mine to Colonel James Johnson , who arrived with about 20 whites and 50 slaves.

In 1826 the first post office was opened in Galena and in 1827 the first steamers began their regular trips between Galena and St. Louis ; in addition, the Miners Journal appeared , the first newspaper in the region. The first Presbyterian church was built in 1838 and in 1841 the city of Galena alone had 650 houses and 2,225 inhabitants. In 1844 the courthouse, which had been started in 1839, was completed and put into operation, and in 1847 the sale of land to private individuals began. In 1854 the county got its first railroad connection through the Illinois Central Railroad , and a big fire destroyed all wooden buildings along the main road.

In 1860 the future US President Ulysses S. Grant came to Galena, rented a house and worked with his father and brothers in his leather goods shop. After the end of the Civil War, Grant came back and set up his campaign office here.